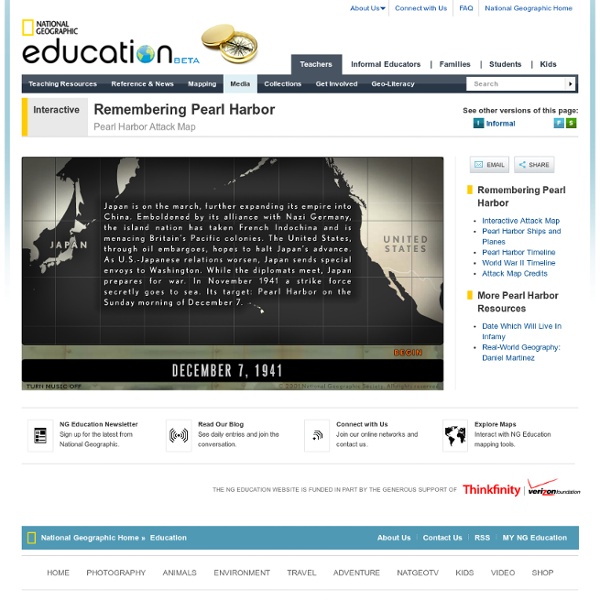 Remembering Pearl Harbor: The USS Arizona Memorial Today the battle-scarred, submerged remains of the battleship USS Arizona rest on the silt of Pearl Harbor, just as they settled on December 7, 1941. The ship was one of many casualties from the deadly attack by the Japanese on a quiet Sunday that President Franklin Roosevelt called "a date which will live in infamy." The Arizona's burning bridge and listing mast and superstructure were photographed in the aftermath of the Japanese attack, and news of her sinking was emblazoned on the front page of newspapers across the land. More than a million people visit the USS Arizona Memorial each year. The Best Sites For Learning About Pearl Harbor With Pearl Harbor Remembrance Day coming up tomorrow, December 7th, I thought I’d put together a quick “The Best…” list of useful resources. I know it’s a bit late, but at least you can use it for planning next year. Here are my picks, not in order of preference, of The Best Sites For Learning About Pearl Harbor (and that are accessible to English Language Learners): EL Civics has A Pearl Harbor Day Lesson, including online resources and reproducible hand-outs. Holt, Rinehart & Winston have a Pearl Harbor Interactive. Scholastic has another interactive on the Pearl Harbor attack. This is a very accessible Thinkquest site developed by students about Pearl Harbor. Learn About Pearl Harbor comes from Pearson. The National Park Service has many good photos of the Arizona Memorial and ones that were taken on the day of the attack. TIME Magazine has a photographic timeline of the event. How Stuff Works has a series of online videos about Pearl Harbor and its aftermath. As always, feedback is welcome.

Ghost Army History and deployment[edit] Inspiration for the unit came from the British units who had honed the deception technique for the battle of El Alamein in late 1942. The U.S. unit had its beginnings at Camp Forrest, Tennessee, and was fully formed at Pine Camp, NY (now Fort Drum), before sailing for the United Kingdom in early May 1944. Some troops went to Normandy two weeks after D-Day, where they simulated a fake Mulberry harbour at night with lights which attempted to draw German artillery from the real ones. As the Allied armies moved east, so did the 23rd, and it eventually was based within Luxembourg, from where it engaged in deceptions of crossings of the Ruhr river, positions along the Maginot Line, Hürtgen Forest, and finally a major crossing of the Rhine to draw German troops away from the actual sites. Recruiting[edit] Ghost soldiers were encouraged to use their brains and talent to mislead, deceive and befuddle the German Army. Tactics[edit] Visual deception[edit] Atmosphere[edit]

World War II: Pearl Harbor - Alan Taylor - In Focus On December 7, 1941, the Imperial Japanese Navy launched a surprise attack on the United States, bombing warships and military targets in Pearl Harbor, Hawaii. More than 350 Japanese aircraft attacked the naval base in two waves, strafing targets, dropping armor-piercing bombs, and launching torpedoes toward U.S. battleships and cruisers. The U.S. forces were unprepared, waking to the sounds of explosions and scrambling to defend themselves. The entire preemptive attack lasted only 90 minutes, and in that time, the Japanese sunk four battleships and two destroyers, pummeled 188 aircraft, and damaged even more buildings, ships and airplanes. (Two of the battleships were later raised and returned to service.) Some 2,400 Americans were killed in the attack; another 1,250 were injured, and a huge shock was dealt to United States. Use j/k keys or ←/→ to navigate Choose: The Japanese aircraft carrier Zuikaku, seen in September of 1941. The USS Shaw burns in Pearl Harbor. Click to view image

Pearl Harbor ORIGINAL PEARL HARBOR PHOTOS Never seen these before----must be somebody 's private pictures they saved all this time. These pic's are so clear....very sad....but, good that we can see them...... THE FELLOW WHO SENT THESE RECEIVED THEM FROM AN OLD SHIPMATE ON THE USS QUAPAW PEARL HARBOR December 7th, 1941 Pearl Harbor On Sunday, December 7th, 1941 the Japanese launched a Surprise attack against the U.S. Hawaii . Admiral Nagumo, hoped to catch the entire fleet in port. Would have it, the Aircraft Carriers and one of the Battleships Were not in port. Island , where it had just delivered some aircraft. Lexingtonwas ferrying aircraft to Midway, and the USS Saratoga and USS Colorado were undergoing repairs in the United States). In spite of the latest intelligence reports about the missing Aircraft carriers (his most important targets), Admiral Nagumo Decided to continue the attack with his force of six carriers and 423 aircraft. The first wave of a two-wave attack. Kaneohe and Ewa.

Pearl Harbor Pearl Harbor is a U.S. naval base near Honolulu, Hawaii, that was the scene of a devastating surprise attack by Japanese forces on December 7, 1941. Just before 8 a.m. on that Sunday morning, hundreds of Japanese fighter planes descended on the base, where they managed to destroy or damage nearly 20 American naval vessels, including eight battleships, and over 300 airplanes. More than 2,400 Americans died in the attack, including civilians, and another 1,000 people were wounded. The day after the assault, President Franklin D. Roosevelt asked Congress to declare war on Japan. Japan and the Path to War The attack on Pearl Harbor was a surprise, but Japan and the United States had been edging toward war for decades. The United States was particularly unhappy with Japan’s increasingly belligerent attitude toward China. To this end, Japan declared war on China in 1937, resulting in the Nanking Massacre and other atrocities. WATCH: Pearl Harbor: The Last Word on HISTORY Vault USS Arizona

The Real Lessons of Pearl Harbor, Part 3 Flight paths of the Japanese attack force at Pearl Harbor by U.S. Government Printing Office/Wikimedia Commons Part 3: Roosevelt's Success and the Lessons to Learn In Part 1 and Part 2, we learned that although President Franklin D. On November 28 and 29, 1941, two messages were sent from Tokyo to the Japanese Embassy in Washington, which warned that "the negotiations will be de facto ruptured," but directed its staff not to inform the American government that negotiations would end. On November 30, two messages were sent from Tokyo to the Japanese Embassy in Berlin, which were decoded on December 1. Say very secretly to [Hitler and Von Ribbentrop] that there is extreme danger that war may suddenly break out between the Anglo-Saxon nations and Japan through some clash of arms and add that the time of the breaking out of war may come quicker than anyone dreams. On December 6, the American Minister in Budapest provided a British communiquÃ© to the Hungarian government.

EXPLOSIVE TRUTH ABOUT PEARL HARBOR: THE STORY THE REST OF THE MEDIA WON’T TELL Originally appeared in the January 1984 issue of Hustler What you’re about to read will amaze and astound you. More than 40 years after Japan’s cowardly sneak attack on Pearl Harbor, HUSTLER has uncovered unquestionable factual evidence that President Franklin Delano Roosevelt knew almost to the hour when the Japanese assault would begin - and deliberately did nothing to prevent it. There was an eerie calm over Hawaii that morning. But Sunday, December 7, 1941, was different. The sailors of the fleet were also unaware that the clear blue sky above would soon begin raining death and destruction on their gently lolling ships. Curiously, though the USS Ward reported sinking a submarine in the prohibited area off Pearl at 6:45 a.m., no alert was sounded. Aboard the battlewagon USS Arizona the members of the band were excused from performing at morning muster since they had won second place in a contest the night before. At 7:50 a.m. swarms of Japanese planes swept over the island.

75 Years After Pearl Harbor, We Now Know the Govt Knew the Attack Was Coming The next day, President Franklin D. Roosevelt denounced this “day of infamy” before Congress, from whom he secured an avid declaration of war. Up until then, however, Americans had overwhelmingly opposed involvement in World War II. although they had been told they would be fighting for “democracy” in that previous war, taxpayers learned from the postwar Graham Committee of Congress that they’d been defrauded out of some $6 billion in armaments that were never manufactured or delivered1;atrocity tales about German soldiers (such as cutting the hands off thousands of Belgian children) had turned out to be fabrications;the sinking of the Lusitania – the central provocation that ultimately led to the U.S. declaration of war – had been committed by Germany not to kill women and children (as propaganda claimed), but to prevent tens of tons of war munitions from reaching the European front. When the Maine sank, the proactive Assistant Secretary of the Navy had been Teddy Roosevelt. Dr. U.S.