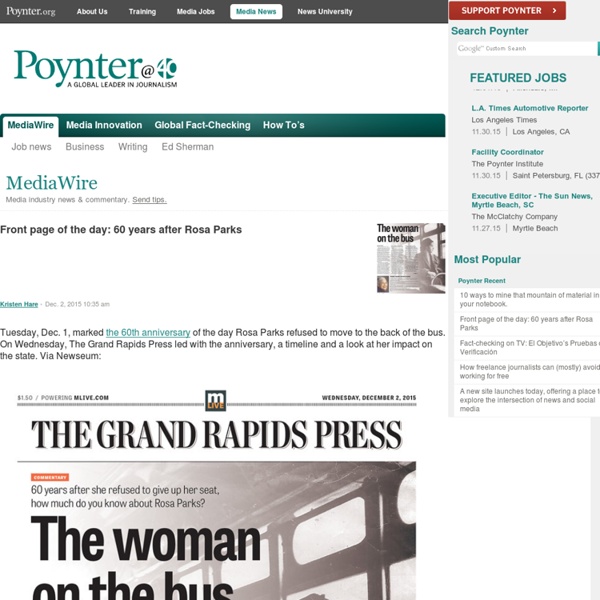 An “overwhelming majority” of Huffington Post editorial workers asked management Tuesday to voluntarily recognize that they’ve joined a union, the Writers Guild of America, East. Word of a unionization move at the high-profile digital media company surfaced in early October, and Arianna Huffington indicated back then she was agreeable to voluntarily recognize a union if the majority so desired. Now what the union characterizes as most of the roughly 350 editorial employees, most of whom work in New York City, have signed up with the union, which represents about 4,000 media workers. Those include writers on “The Daily Show with Trevor Noah,” writers-producers in non-fiction TV and network radio and TV copy writers. Voluntary recognition would mean avoiding a formal election process on whether the union was the collective bargaining representative of the workers. Tools: Permalink

Nicholas Negroponte: The Physical Book Is Dead In 5 Years Today at the Techonomy conference in Lake Tahoe, CA, CNBC’s Maria Bartiromo sat down with a panel including Bill Joy, Kevin Kelly, Nicholas Negroponte, and Willie Smits. The topic was basically the future of technology. And Negroponte had the most interesting (or at least the most controversial) thing to say. The physical book is dead, according to Negroponte. He said he realizes that’s going to be hard for a lot of people to accept. By “dead,” he of course doesn’t mean completely dead. “People will say ‘no, no, no’ — of course you like your libraries,” Negroponte said. “It’s happening. Naturally, I love these type of predictions.

Pressthink - Jay Rosen Journalism - Citizen Journalism - Reporting - Writing - Journalism Jobs and Careers Forced Social Media Deprivation: Unethical Experimentation In Disguise! Provost Eric Darr of Harrisburg University of Science and Technology implemented an interesting policy for the week of September 13-17: he deprived all of his faculty and students on the University Network from accessing several popular social media websites such as Facebook, Twitter and AOL Instant Messenger. His reasons for this censorship, succinct, although misguided, were to remind his students what it was like to live in the "dinosaur age" of a disconnected world (Chapman), but was this really necessary? After all, argues the blogger Alex Priest of Technorati, these websites and others like them only became the cornerstones of the young American's world a mere five years ago, a time most competent college students are likely to recall (1). However, regardless of Darr's motives, it is nearly impossible for a person informed of contemporary ethics of human experimentation to listen about this censorship with a calm facade. Sources:

Sean Parker: Facebook Will Still Be The Vital Network 10 Years From Now Today at the Techonomy conference in Lake Tahoe, CA host David Kirkpatrick sat down with Reid Hoffman and Sean Parker to talk about what follows social media. Specifically, Kirkpatrick asked the two what follows the social networks like Facebook? Parker was quick to answer. “If I had an answer to that, I’d probably already be working on it,” he half-joked. But he elaborated to say that the idea there is one digital paradigm that exists at any moment is a fallacy. And the idea that something else is going to come along and kill it is largely created by the media. He continued to say that obviously there will be different kinds of things in the digital world 10 years from now. Hoffman also said that he doesn’t think social goes away 10 years from now. “Social is the foundation on which things are built,” Hoffman said.

Jonathan Stray RT @TechCrunch: LinkedIn Beefs Up Company Profiles With News Feeds, Career Data, And More by @leenarao We recently wrote about the fast growing number of company profiles on professional social network LinkedIn (the network has over one million to be exact). Launched in April, the company profile gives organizations a centralized profile that has the look and feel of a member profile. LinkedIn also added the ability to “follow” companies, much like you would on Facebook or Twitter. In fact, 30 million LinkedIn users are following over 1 million company profiles Today, LinkedIn is expanding the use of company profiles; creating additional ways companies can interact with members on the platform.

Explore the Titanic Wreck Site via Social Media [EXCLUSIVE] A team of archaeologists, scientists and oceanographers will soon be revisiting the wreck of the Titanic for further scientific discovery and documentation. The entire process will be shared in near real-time with the world via social media. The mission, Expedition Titanic, is meant to not only preserve the iconic ship — disintegrating two and half miles beneath the sea — but also to expose the wreck site to the public for the first time. It's a scientific undertaking like no other, but one with a very modern twist that relies heavily on social media to share the mission with the world. The video below briefly introduces the mission behind the expedition. The Mission: Virtually Raise the Titanic The digital journey is the result of a partnership between RMS Titanic, Inc, a wholly owned subsidiary of Premier Exhibitions, Woods Hole Oceanographic Institution and the Waitt Institute. Preservation Through Social Media

Journalistics — Journalism Blog | Public Relations Blog | Journalistics Full-scale, fetishtically detailed driveable replica 1966 Batmobiles Mark Racop works out of a shop in small-town Indiana, turning out incredibly accurate, driveable 1966 Batmobile replicas. The bodies are modified castings from an old Futura and all the fittings and parts are functional and styled to match the prop Batmobile from the series (you can also buy these individual fittings -- "Bat Parts" -- for your modern car). The sell for $150,000, and you can choose between a rebuilt Ford 460 motor, or a new GM 350 crate engine. Fiberglass Freaks Officially Licensed 1966 BATMOBILE Replicas (Thanks, Larry!) Apple Adds New Features to App Store Sprucing up the App Store with new bells and whistles has been a high priority for Apple as of late. This week, Apple launched a new Genius recommendation tab for the iPad App Store, a helpful tool that will enable app lovers to filter through thousands of applications to find ones that are appropriately suited to their preferences. Although Genius recommendations for the iPad was previously available exclusively via the desktop iTunes interface, the mobile version of this attribute should prove particularly helpful, especially in terms of providing insightful suggestions about other apps you may want based on Apple’s assessment of your recent purchases and perceived taste in apps. In addition to the Genius upgrade, Apple also rolled out a new “Try Before You Buy” component for the App Store, which delivers free “light” versions of otherwise paid apps.

Dan Shapiro Posted: March 29th, 2014 | Author: Dan | Filed under: Startups | 6 Comments I’m told Amazon writes the press release for a product before beginning development. I don’t know exactly how the process works, but this has been sloshing around in my head mixed in with a bunch of other tidbits. Like the trick of running ads that lead to a signup page before you build anything to see how many people are interested. Or the notion that a crowdfunding campaign validates demand before you go build it (although it requires a lot more investment). Recently Apptentive asked me about marketing techniques for apps. Put all this together and I have a modest proposal: if you are creating a new startup, you should figure out your marketing first. Once you find something that resonates, you have a north star. I haven’t really done this before – when I figure out what I’m doing next I plan to give it a try. (You might want to subscribe or follow me on Twitter so you don’t miss new articles) How big? But!

Why Social Media Feels So Good Social Media feels good because someone is finally listening to us. And they are responding. And we don’t have to wait three days for an automated reply. People are talking to people, business are listening to their customers and the primal need to be heard, even about the most trivial matters, is being met. Last week I wrote a piece about how the fitness club Equinox lost me as a customer because of its terrible customer service. Now there is. I want your supervisor to speak to ME! Check this recent AP Story out of Chicago: When Tony Bosco saw mostly negative reviews about the restaurant Wow Bao, he Tweeted: “Going to ‘business’ dinner (at)Wow Bao. It is the combination of being responded to in the first place the immediacy of that outreach the authenticity of that outreach When these things are combined, it packs a powerful customer service wallop. Image Courtesy of kevindooley on Flickr