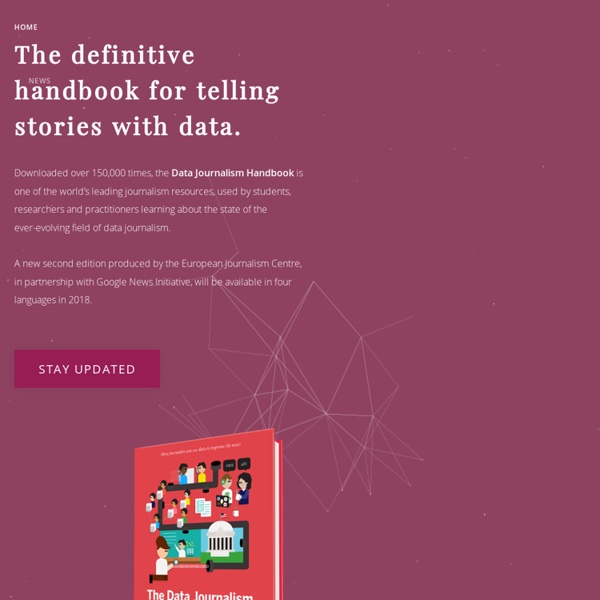 It was born at a 48 hour workshop at MozFest 2011 in London. It subsequently spilled over into an international, collaborative effort involving dozens of data journalism's leading advocates and best practitioners - including from the Australian Broadcasting Corporation, the BBC, the Chicago Tribune, Deutsche Welle, the Guardian, the Financial Times, Helsingin Sanomat, La Nacion, the New York Times, ProPublica, the Washington Post, the Texas Tribune, Verdens Gang, Wales Online, Zeit Online and many others. „ I want to see the handbook in my language! “ If you are a publisher, a news organisation or any other kind of organisation active in the media field interested in becoming an official partner and helping to translate the book into your language please sign up here and we will get in touch with you.

100 books every journalist must read - John Kroll Digital A young journalism student once asked a newspaper editor what she should do to prepare for her hoped-for career as a political reporter. “Read,” the editor said. Absolutely, I thought, sitting between them, waiting for my own interview for a top job to resume. “Read Shakespeare,” he said. “And the Bible.” tripleC - Cognition, Communication, Co-operation Towards Marxian Internet Studies Christian Fuchs Abstract This article gives an overview of example approaches of Critical Internet Studies and points out key concepts of this field. Media Mash 2012 Winners announced (view all dates) Media Mash 2012 is an application challenge from NYC Media Lab to create innovative media mashups using data, APIs, and feeds from leading media and technology companies. Winners will receive $10,000 in cash prizes as well as promotional exposure. Prizes will be awarded for the most innovative applications. The Media Mash is open to individuals and organizations in the United States. Submitted apps can run on the web, desktop computers, tablets, and mobile phones.

Anyone can do it. Data journalism is the new punk This is a chord… this is another… this is a third. NOW FORM A BAND So went the first issue of British punk fanzine Sideburns in 1977 in the "first and last part in a series". 5 Tools for Online Journalism, Exploration and Visualization – ReadWrite In our last post on data journalism, we ran across a number of tools that would be helpful for anyone who is interested in how to make sense of data. The tools represent a renaissance in how we make sense of our information culture. They provide context and meaning to the often baffling world of big data. This is a snapshot of what is available. We are relying on the work done by Paul Bradshaw, whose blog is an excellent source about the new world of data journalism.

eResearch and Digital Humanities: a broader vision? Digital Heat: Vast underground machines run by downtrodden humanists power 'Metropolis. I have been having many conversations with people of late around the boundaries of ‘eResearch’ and ‘Digital Humanities’. And I have received lots of divergent and interesting responses from both researchers and professionals working in various ways with computing in the humanities. And there does tend to be little agreement about certain aspects of the landscape; many researchers have ‘discovered’ computing in the humanities from their own particular perspective and this perspective is often lacking generosity towards the richer and deeper veins of thought and helmsmanship provided by the long history of computing in humanities research and teaching (ie. the digital humanities).

OKFestival Updates: Early Bird Ticket Extension, Developer Travel Bursaries and Open Data Cooking! For those just arriving back to daily life after the summer holidays (and the Mars Curiosity landing!), we have some good news regarding OKFestival – our Early Bird ticket deadline has been extended to this Wednesday, August 8th, 2012. This will give you more time to get those tickets reserved well in advance so you can start planning your week with us in Helsinki, Finland this September. Analyzing the Top 30 Infographics on Visually Ever wonder what makes an infographic successful? Why do some infographics accumulate more than 1 million views and others, barely 100? We’ve talked about viral infographics before, from a creative process standpoint: the story, data and design of an infographic all play a role in whether it will appeal to the masses, as does the way it is promoted. But what does viral content have in common? There are more than 16,000 graphics and visualizations on Visual.ly, so comprehensive analysis would take some time. A good place to start is at the very top.

28+ Apps That Make Your Journalist’s Life Easier Than Ever Staying on top of what’s happening in the world 5. BriefMe used by catherine.rogers BriefMe is a mobile news ranking app that shows you what the world is reading right now. Its algorithm uses social media signals to determine which stories are the most important ones.

where material book culture meets digital humanities » Wynken de Worde Below is the text from a talk I gave at the Geographies of Desire conference, held at the University of Maryland on April 27-28. Almost everything that I said there is something that I’ve said here before, so faithful readers won’t find much that’s new. But I promised I’d stick it up here, so here it is!

CC license version 4.0: Helping meet the needs of open data publishers and users Over the last few months, Creative Commons has been working on the next version of its license suite, version 4.0. The goals of version 4.0 are wide-ranging, but the overall objective is clear: update the licenses so they are considerably more robust, yet easy to understand and use, for both existing communities and new types of users. A key community that version 4.0 aims to serve better are public sector agencies releasing data.

Women's representation in media: the best data on the subject to date Some of the producers of the Guardian's most shared content. The Guardian datablog has joined forces with J. Nathan Matias of the MIT media lab and data scientist Lynn Cherny to collect what is to our knowledge, the most comprehensive, high resolution dataset available on news content by gender and audience interest. Why gather this data? There is evidence that women's byline counts are consistently lower than mens throughout the UK national press. With a similar situation being observed in the US.