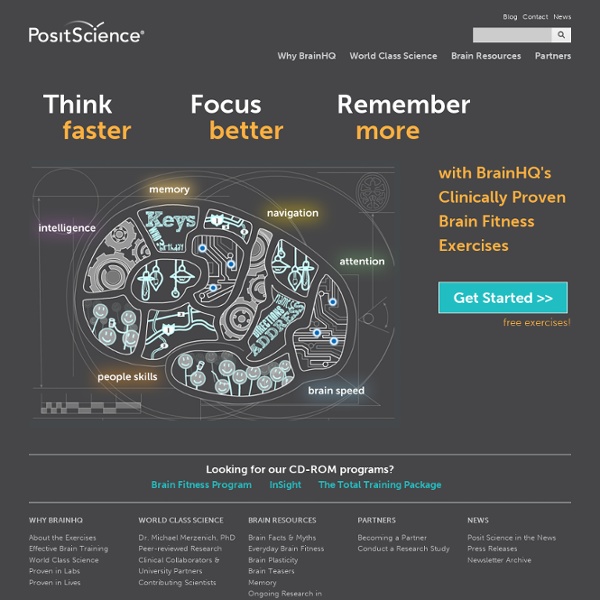 MRC CBU, Cambridge » Jessica Grahn (compiled by Jessica Grahn) You can also use an interactive brain atlas. Orientation descriptions The AC / PC line Unlocking the Science of Habits: How to Hack the Habit Loop & Become the Man You Want to Be For better or for worse, our habits shape us. A good habit is a strong ally in our journey to becoming the men we want to be, while a bad habit acts like a millstone around our necks. (Want to know why? Miswaak The natural toothbrush - Islam web - English The Miswaak was known before Islam, but Islam added a religious perspective to its usage. The Prophetic guidance: The Prophet Muhammad recommended Muslims to clean their teeth using a Miswaak every day; especially upon waking up, when performing ablution, before prayer, when reciting the Quran, before sleeping, when entering the house, and when the mouth has a foul odor. There are many Prophetic narrations that talk about Miswaak. Following are some of them: ‘Aa'ishah

Test Your Brain With Brain Teasers and Games Here you can enjoy the Top 25 Brain Teasers, Games & Illusions that SharpBrains readers (primarily adults, but some younger minds too) have enjoyed the most. It is always good to learn more about our brains and to exercise them!. Fun experiments on how our brains and minds work THE AMYGDALA AND THE EMOTIONS Chapter 9 — The Amygdala and the Emotions by Ben Best This installment is something of a digression in my "systematic" attempt to investigate the anatomical basis of mind. 30 Habits that Will Change your Life Developing good habits is the basic of personal development and growth. Everything we do is the result of a habit that was previously taught to us. Unfortunately, not all the habits that we have are good, that’s why we are constantly trying to improve.

Miswak/Sewak The Miswaak PageGuidelines and Information From Kitabut Tahaarah and SunnatsCompiled by Islam.tc Contents I. Miswaak Quick View of Benefits II. Miswaak: The Whole Story History of the Miswaak The Importance of the Miswaak in Islam Use of Miswaak: When Entering the Home | Leaving the Home | Reciting the Holy Qur'an | On Fridays | When Fasting The Sahabas and the Miswaak The Ulama and Miswaak Respects to be Observed Types of Miswaaks Recite this Dua When Using Miswaak Guidlines for Use Advantages and Benefits: Eliminates Odor | Sharpens the Memory | Sharpens the Intelligence | Many More...

Scientists Use Scans to Better Understand Brain Maturity As children mature, their brains bloom madly with activity — growing, pruning and rewiring. During this process, some connections strengthen, while others die off. The brain is reorganizing itself with experience. Researchers from the Washington University School of Medicine have created a “virtual machine” to study such brain development and to track young brains as they develop. 120 Ways to Boost Your Brain Power Here are 120 things you can do starting today to help you think faster, improve memory, comprehend information better and unleash your brain’s full potential. Solve puzzles and brainteasers.Cultivate ambidexterity. Use your non-dominant hand to brush your teeth, comb your hair or use the mouse. Write with both hands simultaneously.

Good Sense Homemade Dental Formulas Here are a few comments on the subject of dentifrices. Why use a dentifrice? Many years ago, in a terrible decision, the Council on Dental Therapeutic of the ADA said the sole purpose of a dentifrice was to aid in the removal of food particles from tooth surfaces. THE BRAIN FROM TOP TO BOTTOM For many years, scientists’ understanding of how the brain processes language was rather simple: they believed that Wernicke’s area interpreted the words that we hear or read, then relayed this information via a dense bundle of fibres to Broca’s area, which generated any words that we spoke in response. But subsequent experiments with brain imaging have revealed the existence of a third region of the brain that is also indispensable for language. This region is the inferior parietal lobule, also known as “Geschwind’s territory”, in honour of the American neurologist Norman Geschwind, who foresaw its importance as early as the 1960s. Brain imaging studies have now shown that the inferior parietal lobule (angular gyrus and supramarginal gyrus) is connected by large bundles of nerve fibres to both Broca’s area and Wernicke’s area. The inferior parietal lobule is one of the last structures of the human brain to have developed in the course of evolution.

Why Too Much Data Disables Your Decision Making Quick, think back to a major decision. You know, the kind that compelled you to read everything on a topic and lead you to spend hours devouring every last scrap of data. How'd that work out for you? We like to think that more information drives smarter decisions; that the more details we absorb, the better off we'll be.