Uk.pinterest. Decapitated Worms Regrow Heads with Memories Still Inside. Neurogenesis. UCLA study suggests iron is at core of Alzheimer's disease. Findings challenge conventional thinking about possible causes of disorder Alzheimer's disease has proven to be a difficult enemy to defeat. 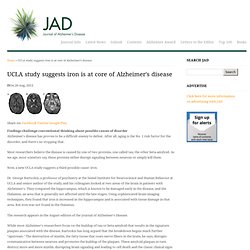 After all, aging is the No. 1 risk factor for the disorder, and there's no stopping that. Most researchers believe the disease is caused by one of two proteins, one called tau, the other beta-amyloid. As we age, most scientists say, these proteins either disrupt signaling between neurons or simply kill them. Now, a new UCLA study suggests a third possible cause: iron. Dr. The research appears in the August edition of the Journal of Alzheimer's Disease. 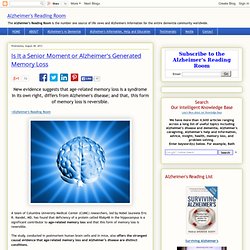 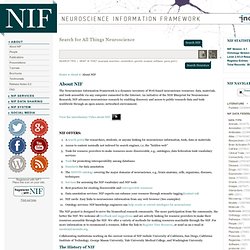 DARPA Projects That'll Creep You Out - Aaron Dykes & Melissa Melton - Truth Stream Media. Michael Merzenich: Growing evidence of brain plasticity. How does my brain work? I thought I put it in the hippocampus but it's not there! Cocaine use linked to new brain structures: Possible mechanism for drug-seeking behavior in humans identified. Mice given cocaine showed rapid growth in new brain structures associated with learning and memory, according to a research team from the Ernest Gallo Clinic and Research Center at UC San Francisco. 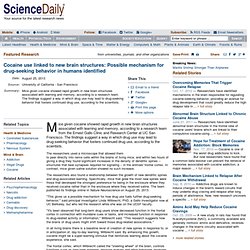 The findings suggest a way in which drug use may lead to drug-seeking behavior that fosters continued drug use, according to the scientists. The Neurocritic: The Dark Side of Diagnosis by Brain Scan. Daniel Amen: Pioneer or profiteer? 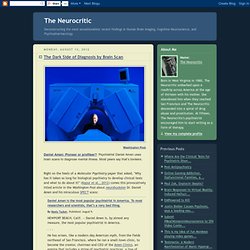 : Psychiatrist Daniel Amen uses brain scans to diagnose mental illness. Most peers say that’s bonkers. Right on the heels of a Molecular Psychiatry paper that asked, "Why has it taken so long for biological psychiatry to develop clinical tests and what to do about it? " (Kapur et al., 2012) comes this provocatively titled article in the Washington Post about neurohuckster Dr. Terence mcKenna en Alexander Shulgin in Mexico 1996. Transform Your Mind, Change Your Brain. DMT - THE SPIRIT MOLECULE. What the Government Doesn't Want YOU to Know about DMT.

New Finding Calls Into Question Assumptions About Sexuality. What Causes Homosexual Desire - Dr. Cameron. Gay Pride Event Turns Violent, Christian Protestor Attacked. Memory Scientists Say: All Is Not Forgotten. Unless you are this woman, you probably have a long mental list of moments and facts you wish you could remember -- but for the life of you, you can't. 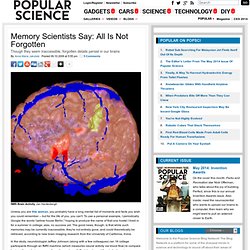 To use a personal example, I periodically Google the words "yellow house Berlin," hoping to produce the name of that one hostel I lived in for a summer in college; alas, no success yet. The good news, though, is that while such memories may be currently inaccessible, they're not entirely gone, and could theoretically be retrieved, according to new brain imaging research from the University of California, Irvine. In the study, neurobiologist Jeffrey Johnson (along with a few colleagues) ran 16 college participants through an fMRI machine (which measures neural activity via blood flow) to compare brain patterns during memory formation and recall.

Using what is called "pattern analysis," it's possible to attach a unique pattern of brain activity to every individual thing we do. [via Wired.com] The brain scan that can read people's intentions. A team of world-leading neuroscientists has developed a powerful technique that allows them to look deep inside a person's brain and read their intentions before they act. 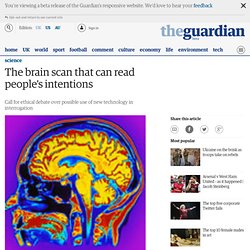 The research breaks controversial new ground in scientists' ability to probe people's minds and eavesdrop on their thoughts, and raises serious ethical issues over how brain-reading technology may be used in the future. The team used high-resolution brain scans to identify patterns of activity before translating them into meaningful thoughts, revealing what a person planned to do in the near future. Mind-Reading Machines: How Far Should They Go? Scientists have developed a computer program that predicts the mental patterns a picture will elicit, and thus can tell what somebody saw simply by looking at their brain’s activity. 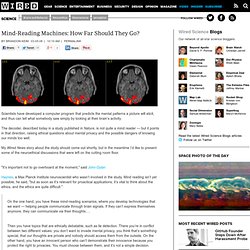 The decoder, described today in a study published in Nature, is not quite a mind reader — but it points in that direction, raising ethical questions about mental privacy and the possible dangers of knowing our minds too well. Read My Brain - I Didn't Do It - Inside Time Newspaper. Back. 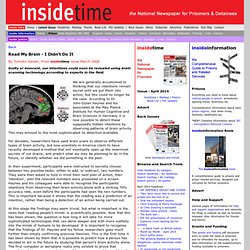 Clearing the Mind: How the Brain Cuts the Clutter. Newly discovered neurons in the front of the brain act as the bouncers at the doors of the senses, letting in only the most important of the trillions of signals our bodies receive. 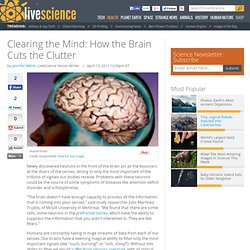 Problems with these neurons could be the source of some symptoms of diseases like attention deficit disorder and schizophrenia. What is Aphasia? Aphasia is an acquired disorder caused by an injury to the brain and affects a person’s ability to communicate. It is most often the result of stroke or head injury. An individual with aphasia may experience difficulty expressing themselves when speaking, difficulty understanding the speech of others, and difficulty reading and writing.

Sadly, aphasia can mask a person’s intelligence and ability to communicate feelings, thoughts and emotions. Epilepsy Foundation. Skin Cells Reprogrammed Directly into Brain Cells. Human skin cells (top) can be converted into medium spiny neurons (bottom) with exposure to the right combination of microRNAs and transcription factors, according to work by Andrew Yoo and his research team.

(Source: WUSTL/Yoo lab)Scientists have described a way to convert human skin cells directly into a specific type of brain cell affected by Huntington’s disease, an ultimately fatal neurodegenerative disorder. Unlike other techniques that turn one cell type into another, this new process does not pass through a stem cell phase, avoiding the production of multiple cell types, the study’s authors report.

The researchers, at Washington University School of Medicine in St. Louis, demonstrated that these converted cells survived at least six months after injection into the brains of mice and behaved similarly to native cells in the brain. The work appears in the journal Neuron.