Mcgovern-institute-roger-nicoll-scolnick.html#.T1nNPoCdevA. The McGovern Institute for Brain Research at MIT announced today that Roger Nicoll of the University of California, San Francisco, is the winner of the 2012 Edward M. 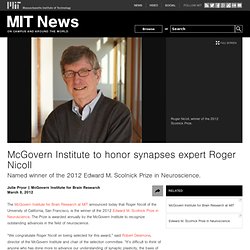 Scolnick Prize in Neuroscience. The Prize is awarded annually by the McGovern Institute to recognize outstanding advances in the field of neuroscience. “We congratulate Roger Nicoll on being selected for this award,” said Robert Desimone, director of the McGovern Institute and chair of the selection committee. “It’s difficult to think of anyone who has done more to advance our understanding of synaptic plasticity, the basis of learning and memory.”

Nicoll’s main research goal for almost three decades has been to understand, at the cellular and molecular level, how electrical activity reshapes the brain’s connections. In a key paper published in 1988, Nicoll showed that LTP is triggered by a rise in calcium concentration within the postsynaptic terminal. What DON'T we know about the brain? Vast amounts, whole oceans and skies worth. Every so often something comes in one of my Google alerts about how much we do not know about the brain. 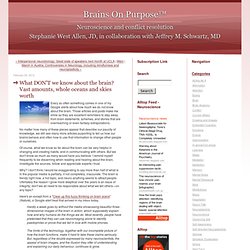 Those articles and posts make me smile as they are excellent reminders to stay away from brain statements, schemes, and stories that are overreaching or even fantasy extrapolations. No matter how many of these pieces appear that describe our paucity of knowledge, we still see many more articles purporting to tell us how our brains behave and often how to use that information to change other people or ourselves. Of course, what we know so far about the brain can be very helpful in changing and creating habits, and in communicating with others. But we don't know as much as many would have you believe. I remind myself frequently to be discerning when reading and hearing about the brain, investigate the sources, follow and appreciate experts I trust.

Why? Here's an except from a "Clear up this fuzzy thinking on brain scans" (Nature), a Google-alert treat that arrived in my inbox today. Sns. Neuroscientists unite for 'Moon shot' Top Ten Myths About the Brain. How to make a human neuron. Brain Awareness Video Contest. 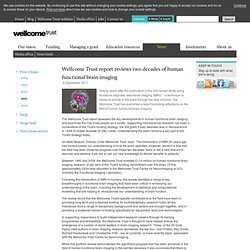 The Wellcome Trust report assesses the key developments in human functional brain imaging and examines the role it has played as a funder. Supporting neuroscience research has been a cornerstone of the Trust's funding strategy: the first grant it ever awarded was in neuroscience in 1938, to Nobel laureate Dr Otto Loewi. Understanding the brain remains a key part of the Trust's strategy today. Sir Mark Walport, Director of the Wellcome Trust, says: "The introduction of fMRI 20 years ago has revolutionised our understanding of how the brain operates. The review identified a number of current challenges and opportunities for the functional brain imaging research community. Contact. Alltop - Top Neuroscience News. Mind and Brain. Brain Canada - Homepage. Neural_Networks. Society for Neuroscience.