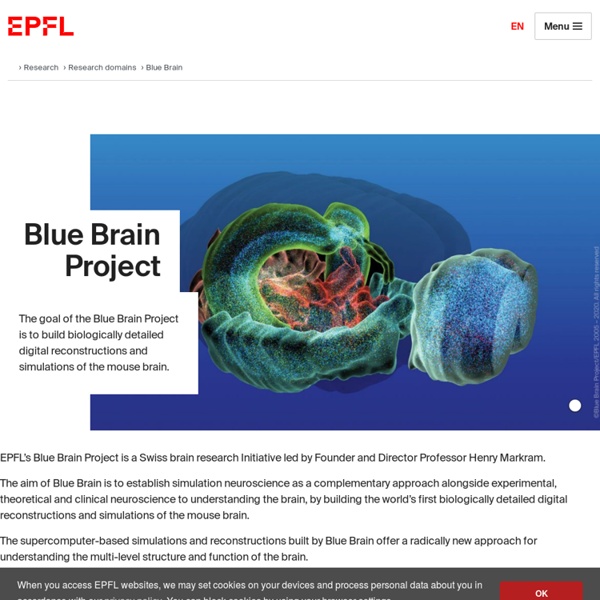 News and Announcements The Human Brain Project to present at Swisstech Open Days Representatives of the Human Brain Project (HBP) will be presenting at the grand opening of the Swiss Tech Convention Center, at EPFL in Lausanne on the weekend of 5-6 April 2014. The presentation will consist of a global overview of the project, followed by a projection of the 3D HBP movie and a 10-minute Q&A session. This event will be open to the public. The Human Brain Project Invited to the World Economic Forum

The Chinese Room Argument 1. Overview Work in Artificial Intelligence (AI) has produced computer programs that can beat the world chess champion and defeat the best human players on the television quiz show Jeopardy. AI has also produced programs with which one can converse in natural language, including Apple's Siri. Our experience shows that playing chess or Jeopardy, and carrying on a conversation, are activities that require understanding and intelligence.

Sheryl Sandberg and Adam Grant on Resilience Facebook COO Sheryl Sandberg talks about returning to work after her husband’s death, and Wharton management and psychology professor Adam Grant discusses what the research says about resilience. In this joint interview, they talk about how to build resilience in yourself, your team, and your organization. They’re the authors of the new book, Option B: Facing Adversity, Building Resilience, and Finding Joy. Download this podcast

Elon Musk Says There’s a ‘One in Billions’ Chance Reality Is Not a Simulation Wednesday night, SpaceX and Tesla CEO Elon Musk did that thing he does every so often, which is take wild questions from an audience and answer them as if he’s been thinking about them for years, usually because he has. Pick a random quote out of a bag and you can turn Musk’s statements at the Recode Code Conference into a piece of news: He wants to put humans on Mars by 2025, said SpaceX is still on track to test the most powerful rocket in the world this year, said Mars isn’t a “bad choice” for a place to die, wants to relaunch a used Falcon 9 rocket in a few months, said we’re already cyborgs, discussed why a direct democracy would be the best political system for a Mars colony and then went into specifics of how that democracy would work, etc. Depending on the question, the resulting discussions are ones philosophy or engineering students have probably had while they’re flying high on an illicit substance.

Cognitive bias cheat sheet – Better Humans You don’t have to. But you can start by remembering these four giant problems our brains have evolved to deal with over the last few million years (and maybe bookmark this page if you want to occasionally reference it for the exact bias you’re looking for): Information overload sucks, so we aggressively filter. Noise becomes signal.Lack of meaning is confusing, so we fill in the gaps.

Temple Grandin Early life and education[edit] Grandin was born in Boston, Massachusetts, to Eustacia Cutler and Richard Grandin. She was diagnosed with autism at the age of two in 1949. Elon Musk: There's only one AI company that worries me Elon Musk's concerns about the dangers of artificial intelligence have been well publicized, but the SpaceX and Tesla founder says that of all the companies currently working on self-aware computers, there's only one whose efforts actually worry him. Speaking on stage at Recode's Code Conference, Musk was asked by The Verge's own Walt Mossberg whether he was worried specifically about the efforts of big tech players like Google and Facebook currently pivoting to AI research. "I won't name names," Musk said, "but there's only one." Mossberg pressed the question, wondering whether the company that kept the Tesla boss up at night was not one currently preoccupied with developing its own car. With a wan smile and a lengthy glance at the floor, Musk repeated his answer, suggesting his eye was on Google.

The Neuroscience Revolution is Here: 5 Ways To Supercharge Your Brain With TechnologyTheFeelGoodLifestyle.com “The brain is the last and grandest biological frontier, the most complex thing we have yet discovered in our universe. It contains hundreds of billions of cells interlinked through trillions of connections. The brain boggles the mind.” ~James D. Watson, 1992

Gallery Videos Reconstruction and simulation of neocortical microcircuitry The Blue Brain Project Movie Images (High resolution images can be downloaded by clicking on the bold part of the legend) Twitter is closer to emulate a Neural Network than Facebook When we think of Twitter and the innovation behind it, the first thing we all think is 140. 140 characters is without a doubt an amazing innovation that Twitter introduced which makes communication flow faster, forces twitters to summarize a piece of news or information, or an idea or an opinion and allows followers to get information or an idea faster as well. Also, after the introduction of url shorteners (tinyurl,com originally and many others later on such as bit.ly) an emergent property of Twitter came to life: the linked web. Any blog post or news article out there could be potentially linked multiple times in Twitter with quick summaries and opinions. Other emerging properties or elements in Twitter are:. Tags, early on twitters started using tags as a way to group events or themes together and follow them separately.. Curated content appeared more recently in an attempt to organize tweets in channels like mode.

Digital version of piece of rat brain fires like the real thing The brain is going digital. A tiny piece of a rat’s brain has been reconstructed in minute detail in a computer. The digital piece of brain, which includes 31,000 neurons and their 37 million synapses, fires like the real thing, and is already revealing fresh clues as to how the brain works. The simulation is the first significant achievement of the Blue Brain project, which was launched 10 years ago by Henry Markram at the Swiss Federal Institute of Technology in Lausanne, Switzerland. Today’s breakthrough represents the first step to a larger goal – creating a digital model of the entire human brain to probe consciousness itself. So far, the digital brain recreates a piece of tissue about one third of a millimetre cubed.

The Tyranny of Stuctureless For everyone to have the opportunity to be involved in a given group and to participate in its activities the structure must be explicit, not implicit. The rules of decision-making must be open and available to everyone, and this can happen only if they are formalized. This is not to say that formalization of a structure of a group will destroy the informal structure. It usually doesn't. But it does hinder the informal structure from having predominant control and make available some means of attacking it if the people involved are not at least responsible to the needs of the group at large. Is Twitter a Complex Adaptive System I’ve seen a bunch of posts bubble up over the past few days that are really sparking my curiousity about what is really going on with Twitter, so I need to do a little brain dump. Bear with me. Insight #1 An article by Rosabeth Moss Kanter was just published today on the Harvard Business Review website, titled On Twitter and in the Workplace, It’s Power to the Connectors. In it, she highlights the fact that there is an organizational trend moving away from the hierarchical networks of the 20th century, and towards complex, distributed, non-hierarchical structures of business organization and leadership.