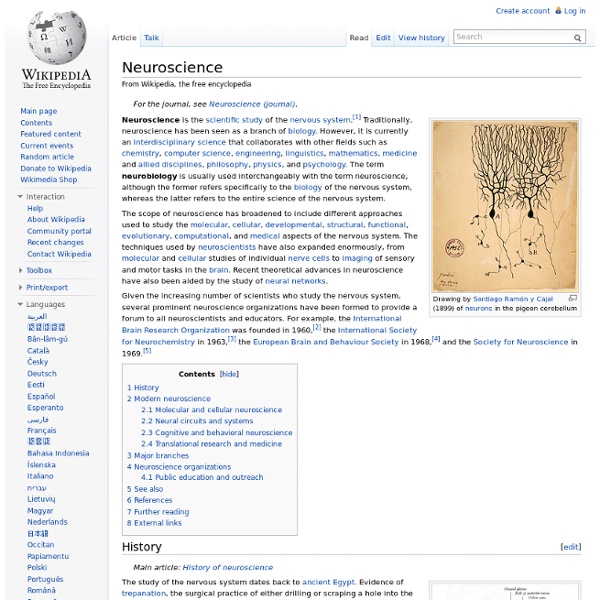 Near death experience Characteristics[edit] Researchers have identified the common elements that define near-death experiences.[24] Bruce Greyson argues that the general features of the experience include impressions of being outside one's physical body, visions of deceased relatives and religious figures, and transcendence of egotic and spatiotemporal boundaries.[25] Many different elements have been reported, though the exact elements tend to correspond with the cultural, philosophical, or religious beliefs of the person experiencing it: The traits of a classic NDE are as follows: The notice of unpleasant sound or noise (claimed by R.

Science General Systematic enterprise that builds and organizes knowledge The Universe represented as multiple disk-shaped slices across time, which passes from left to right Modern science is typically divided into three major branches that consist of the natural sciences (e.g., biology, chemistry, and physics), which study nature in the broadest sense; the social sciences (e.g., economics, psychology, and sociology), which study individuals and societies; and the formal sciences (e.g., logic, mathematics, and theoretical computer science), which study abstract concepts. There is disagreement,[19][20][21] however, on whether the formal sciences actually constitute a science as they do not rely on empirical evidence.[22][20] Disciplines that use existing scientific knowledge for practical purposes, such as engineering and medicine, are described as applied sciences.[23][24][25][26] History Early cultures

10 Practical Uses For Psychological Research in Everyday Life People love to give each other advice. The web is full to bursting with all types of pseudo-psychological advice about life. The problem is, how much of this is based on real scientific evidence? Well, here on PsyBlog we’ve got the scientific evidence. So here’s my top 10 list of what you can learn practically from the psychological research discussed here recently. 1. Cell (biology) The cell (from Latin cella, meaning "small room"[1]) is the basic structural, functional and biological unit of all known living organisms. Cells are the smallest unit of life that can replicate independently, and are often called the "building blocks of life". The study of cells is called cell biology. The cell was discovered by Robert Hooke in 1665. The cell theory, first developed in 1839 by Matthias Jakob Schleiden and Theodor Schwann, states that all organisms are composed of one or more cells, that all cells come from preexisting cells, that vital functions of an organism occur within cells, and that all cells contain the hereditary information necessary for regulating cell functions and for transmitting information to the next generation of cells.[5] Cells emerged on Earth at least 3.5 billion years ago.[6][7][8] Anatomy

Pineal Gland's Third Eye: One Of The Biggest Cover-ups in Human History The pineal gland (also called the pineal body, epiphysis cerebri, epiphysis or the “third eye”) is a small endocrine gland in the vertebrate brain. It produces the serotonin derivative melatonin, a hormone that affects the modulation of wake/sleep patterns and seasonal functions. Its shape resembles a tiny pine cone (hence its name), and it is located near the center of the brain, between the two hemispheres, tucked in a groove where the two rounded thalamic bodies join. Physics Various examples of physical phenomena Physics is one of the oldest academic disciplines, perhaps the oldest through its inclusion of astronomy.[8] Over the last two millennia, physics was a part of natural philosophy along with chemistry, certain branches of mathematics, and biology, but during the Scientific Revolution in the 17th century, the natural sciences emerged as unique research programs in their own right.[b] Physics intersects with many interdisciplinary areas of research, such as biophysics and quantum chemistry, and the boundaries of physics are not rigidly defined.

Color: Meaning, Symbolism and Psychology Green occupies more space in the spectrum visible to the human eye and is second only to blue as a favorite color. Green is the pervasive color in the natural world that is an ideal backdrop in interior design because we are so used to seeing it everywhere. The natural greens, from forest to lime, are seen as tranquil and refreshing, with a natural balance of cool and warm (blue and yellow) undertones. Green is considered the color of peace and ecology. However, there is an "institutional" side to green, associated with illness or Government-issued that conjure up negative emotions as do the "slimy" or bilious greens. How the color green affects us physically and mentally * Soothing * Relaxing mentally as well as physically * Helps alleviate depression, nervousness and anxiety * Offers a sense of renewal, self-control and harmony

Zoology Zoology (/zoʊˈɒlədʒi/, zoh AHL uh jee) or animal biology, is the branch of biology that relates to the animal kingdom, including the structure, embryology, evolution, classification, habits, and distribution of all animals, both living and extinct. The term is derived from Ancient Greek ζῷον, zōon, i.e. "animal" and λόγος, logos, i.e.

10 Questions About the Pineal Gland That Add to the Mystery of Spirituality The pine cone shaped, pea-sized pineal gland, located in the center of the human brain, is an organ of tremendous interest these days. To many spiritual seekers it is the ‘seat of the soul‘ and the ‘third eye,’ the anatomical part of the human body that acts as our spiritual antennae, connecting us to the non-physical, spiritual planes of existence. However, to many scientists and rigid materialist thinkers, it is strictly an endocrine gland responsible for the secretion of the hormone melatonin, a substance which, among other things, aids in the regulation of our circadian rhythms.

Biology History The objects of our research will be the different forms and manifestations of life, the conditions and laws under which these phenomena occur, and the causes through which they have been effected. The science that concerns itself with these objects we will indicate by the name biology [Biologie] or the doctrine of life [Lebenslehre]. Although modern biology is a relatively recent development, sciences related to and included within it have been studied since ancient times. Natural philosophy was studied as early as the ancient civilizations of Mesopotamia, Egypt, the Indian subcontinent, and China. However, the origins of modern biology and its approach to the study of nature are most often traced back to ancient Greece.[6] While the formal study of medicine dates back to Hippocrates (ca. 460 BC – ca. 370 BC), it was Aristotle (384 BC – 322 BC) who contributed most extensively to the development of biology.

Berkeley on Biphasic Sleep If you see a student dozing in the library or a co-worker catching 40 winks in her cubicle, don’t roll your eyes. New research from the University of California, Berkeley, shows that an hour’s nap can dramatically boost and restore your brain power. Indeed, the findings suggest that a biphasic sleep schedule not only refreshes the mind, but can make you smarter. Students who napped (green column) did markedly better in memorizing tests than their no-nap counterparts. (Courtesy of Matthew Walker) Why this crab's blood could save your life Nearly 50 years ago, scientists discovered the horseshoe crab's clotting-response to bacterial toxins. Now, its blood is harvested in huge quantities, to be used in a test to ensure medical products are not contaminated. Charles River Laboratories manufactures the tests, and is working to raise awareness about the importance of this prehistoric species and the need to protect them. The company helped pass landmark legislation to protect the horseshoe crab in South Carolina, a key spawning ground where it collects crabs. Limulus amebocyte lysate (LAL), a reagent which is extracted from the horseshoe crab's blue blood, can detect just one picogram of harmful bacterial endotoxin per milliliter -- equivalent to one grain of sand in an Olympic-size pool. More than 600,000 crabs are captured each year to "donate" around 30% of their blood.

Brain Waves And The Deeper States Of Consciousness Every part of your body vibrates to its own rhythm. Your brain has a unique set of brain waves. In neuroscience, there are five distinct brain wave frequencies, namely Beta, Alpha, Theta, Delta and the lesser known Gamma. Learning mind control at the deeper states of consciousness opens you up to the world of your subconscious mind where you can create your reality at will and with exact precision.