Aberrant Development of Speech Processing in Young Children with Autism: New Insights from Neuroimaging Biomarkers. Introduction Autism, a term initially introduced by Kanner (1943) and almost at the same period by Asperger (1944), is a pervasive disorder of neurodevelopment with an early onset. 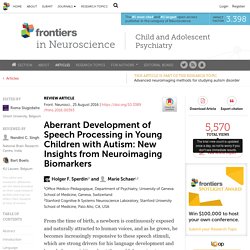 According to the most recent census, autism affects up to 1 in 68 children (1.5%) in the United States (Baio, 2014). Abnormal Resting-State Quantitative Electroencephalogram in Children With Central Auditory Processing Disorder: A Pilot Study. Acoustic change responses to amplitude modulation: a method to quantify cortical temporal processing and hemispheric asymmetry. Introduction Timing information is crucial for all aspects of hearing including sound detection, sound localization, and sound identification. 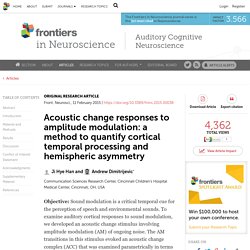 In this report we describe the use of the acoustic change complex (ACC) to quantify temporal processing ability in normal hearing adults. It is not surprising that altered TMTFs are related to speech perception deficits given that the speech signal innately has AM. Subjects Stimuli. Addressing the Complexity of Tourette's Syndrome through the Use of Animal Models. 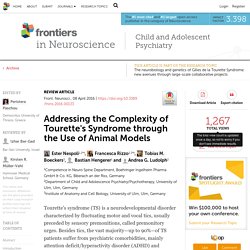 Tics are involuntary movements or vocalizations that can involve different parts of the body changing in frequency, intensity and duration. A hypothesis on the biological origins and social evolution of music and dance. 1School of Life Science, Tsinghua University, Beijing, China2Ocean Science and Technology Division, Graduate School at Shenzhen, Tsinghua University, Shenzhen, China3Gene and Cell Engineering Laboratory, Shenzhen Institutes of Advanced Technology, Chinese Academy of Sciences, Shenzhen, China The origins of music and musical emotions is still an enigma, here I propose a comprehensive hypothesis on the origins and evolution of music, dance, and speech from a biological and sociological perspective. 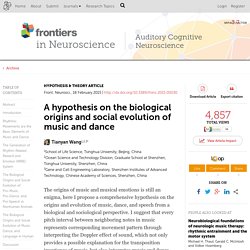 I suggest that every pitch interval between neighboring notes in music represents corresponding movement pattern through interpreting the Doppler effect of sound, which not only provides a possible explanation for the transposition invariance of music, but also integrates music and dance into a common form—rhythmic movements. Accordingly, investigating the origins of music poses the question: why do humans appreciate rhythmic movements? Reviewed by: Copyright © 2015 Wang. Assessing Auditory Processing Deficits in Tinnitus and Hearing Impaired Patients with the Auditory Behavior Questionnaire.

Introduction The auditory system transmits sounds from the environment to the auditory cortex where they are processed to produce a perception. 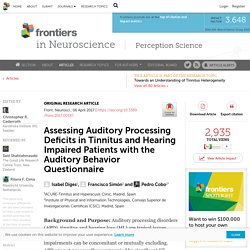 The sound signal, a vibroacoustic wave, is transduced into an electrical train of pulses at the synapses between the hair cells of the Corti organ and the auditory nerve. This interface is a powerful device able to transmit signals from the periphery to the auditory pathway spanning 12 decades in amplitude (120 dB) and 3 decades in frequency (20–20 kHz) (Knipper et al., 2013). This mechano-electrical transduction of sound waves into a train of electrical spikes is completed within 1–4 ms with standard deviation of roughly 0.8 ms, which is even lesser than the corresponding constant time of mammalian visual cells (Kopp-Scheinpflug and Tempel, 2015). 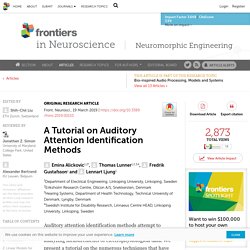 Introduction The first use of the term cocktail party in the context of auditory scene analysis appeared in Cherry (1953), where it was used to refer to the challenge of focusing on a single sound source, often a speech stream, while suppressing other unwanted sounds in a noisy and complex background. The ability to segregate and follow a sound source of interest in a cocktail party environment is one of the hallmarks of brain functions. Although this is a highly ill-posed problem in a mathematical sense, the human brain instantly solves this problem, with a compelling ease and accuracy that is difficult to be matched by any currently available algorithm. However, recent studies have shown the potential of model-based algorithms to assist intelligent hearing aids, and the purpose of this tutorial is to provide a rather broad coverage of the mathematical tools available for solving the cocktail party problem.

There are many studies on deciphering human auditory attention. Auditory connections and functions of prefrontal cortex. Department of Neurobiology and Anatomy, University of Rochester School of Medicine and Dentistry, Rochester, NY, USA The functional auditory system extends from the ears to the frontal lobes with successively more complex functions occurring as one ascends the hierarchy of the nervous system. 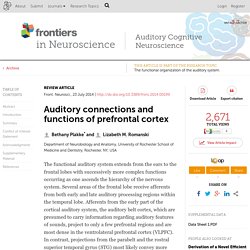 Several areas of the frontal lobe receive afferents from both early and late auditory processing regions within the temporal lobe. Afferents from the early part of the cortical auditory system, the auditory belt cortex, which are presumed to carry information regarding auditory features of sounds, project to only a few prefrontal regions and are most dense in the ventrolateral prefrontal cortex (VLPFC). In contrast, projections from the parabelt and the rostral superior temporal gyrus (STG) most likely convey more complex information and target a larger, widespread region of the prefrontal cortex. Auditory learning through active engagement with sound: biological impact of community music lessons in at-risk children. Introduction The developing brain is hungry to engage with diverse and meaningful sensory input. 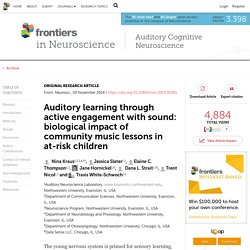 Hearing sounds, and actively making meaning from those sounds, bootstraps language development, provides a framework for socioemotional bonding, and contributes to the development of auditory, as well as some non-auditory, cognitive skills (Kuhl, 2004; Kral and Eggermont, 2007; Conway et al., 2009; Kral and Sharma, 2012). Early acoustic experiences also play a formative role in guiding an individual's life of listening and learning, for better or worse. Children who grow up in poverty have less developed language and cognitive skills than their peers, putatively reflecting some degree of linguistic deprivation (Bradley and Corwyn, 2002; Stevens et al., 2009).

This is likely due to a confluence of factors, including greater environmental noise in low-income neighborhoods, poorer nutrition, and potentially fewer enriching auditory interactions with caregivers. Methods Subjects Group Formation. Auditory working memory for objects vs. features. Introduction The auditory scene contains sound sources, which can be parsed into auditory objects by the listeners. 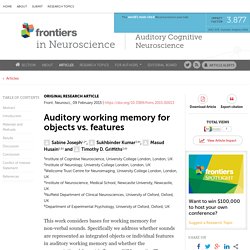 Some investigators have argued that auditory objects might be considered to be fundamental perceptual units, comprising combinations of sensory cues that form a coherent whole that may or may not be associated with a semantic label (Griffiths and Warren, 2004). Characteristics of stimulus structure, such as common onsets and offsets, harmonic structure, and common modulation determine object perception (Bregman, 1990; Darwin and Carlyon, 1995). Auditory objects can be argued to be the unit of auditory perception subject to sequential grouping to form larger “streams” that might be obligatory (Vliegen et al., 1999) or dependent to an extent upon selective attention (Shinn-Cunningham, 2008). We seek to define how these features are integrated into coherent wholes within working memory.

In the current study, subjects performed a within-modality dual task. Autism As a Disorder of High Intelligence. Introduction ‘How wonderful that we have met with a paradox. 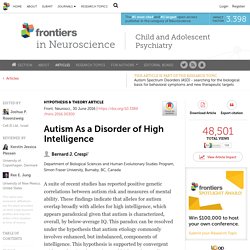 Now we have some hope of making progress.’ Niels Bohr. Deficits in Auditory Rhythm Perception in Children With Auditory Processing Disorder Are Unrelated to Attention. Introduction. Development of social skills in children: neural and behavioral evidence for the elaboration of cognitive models. Introduction Social cognition involves all the abilities that enable us to understand social agents and to interact with them. In this process, it is crucial to be able to predict the behavior of others, by detecting, analyzing, and interpreting their intentions. How musical training affects cognitive development: rhythm, reward and other modulating variables. Introduction Psychological and neuroscientific research demonstrates that musical training in children is associated with heightening of sound sensitivity as well as enhancement in verbal abilities and general reasoning skills.

Others have investigated the extent to which educational levels might affect the course of cognitive decline associated with aging (Evans et al., 1993; Leibovici et al., 1996; Zahodne et al., 2011). Although the positive effect of education on cognitive skills is currently widely accepted, the impact of education on auditory processing has not yet been evaluated. Methods Ethics Statement Participants Table 1. Language Impairments in ASD Resulting from a Failed Domestication of the Human Brain. Introduction. Neural Biomarkers for Dyslexia, ADHD, and ADD in the Auditory Cortex of Children.

The Evolutionary Concept of “Preadaptation” Applied to Cognitive Neurosciences. The evolution of music and human social capability. The Genetic Etiology of Tourette Syndrome: Large-Scale Collaborative Efforts on the Precipice of Discovery. The Music-In-Noise Task (MINT): A Tool for Dissecting Complex Auditory Perception. The plastic ear and perceptual relearning in auditory spatial perception. Toward an Interdisciplinary Understanding of Sensory Dysfunction in Autism Spectrum Disorder: An Integration of the Neural and Symptom Literatures.