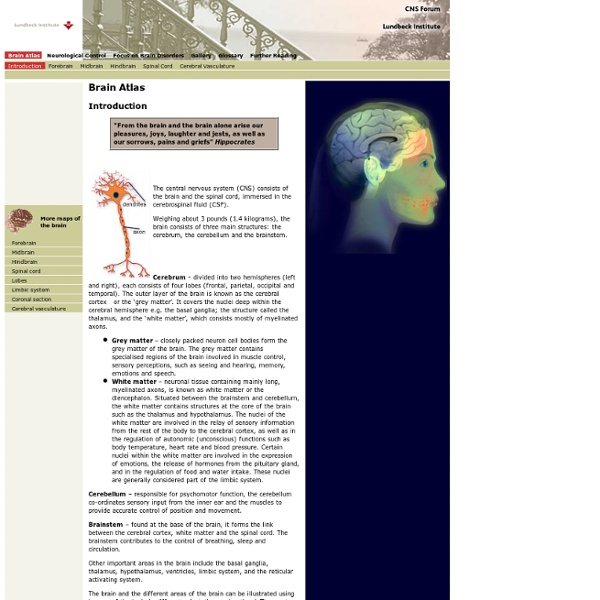 The central nervous system (CNS) consists of the brain and the spinal cord, immersed in the cerebrospinal fluid (CSF). Weighing about 3 pounds (1.4 kilograms), the brain consists of three main structures: the cerebrum, the cerebellum and the brainstem. Cerebrum - divided into two hemispheres (left and right), each consists of four lobes (frontal, parietal, occipital and temporal). The outer layer of the brain is known as the cerebral cortex or the ‘grey matter’. It covers the nuclei deep within the cerebral hemisphere e.g. the basal ganglia; the structure called the thalamus, and the ‘white matter’, which consists mostly of myelinated axons. – closely packed neuron cell bodies form the grey matter of the brain. Cerebellum – responsible for psychomotor function, the cerebellum co-ordinates sensory input from the inner ear and the muscles to provide accurate control of position and movement. Basal Ganglia Thalamus and Hypothalamus Ventricles Limbic System Reticular Activating System Neurons Glia

Neuron All neurons are electrically excitable, maintaining voltage gradients across their membranes by means of metabolically driven ion pumps, which combine with ion channels embedded in the membrane to generate intracellular-versus-extracellular concentration differences of ions such as sodium, potassium, chloride, and calcium. Changes in the cross-membrane voltage can alter the function of voltage-dependent ion channels. If the voltage changes by a large enough amount, an all-or-none electrochemical pulse called an action potential is generated, which travels rapidly along the cell's axon, and activates synaptic connections with other cells when it arrives. Neurons do not undergo cell division. In most cases, neurons are generated by special types of stem cells.

Anatomy and Physiology animations Listed below are a collection of physiology animations and anatomy animations. These animations are intended to support text or lecture and it is important that they are not seen as stand-alone reference material. Notes: If you or your students discover any factual errors in the animations please let me know: andrew@visualization.org.uk Some of the animations can only be accessed from the university network - please contact Liz Hodgson in the LDU if you would like them on WebCT so that students can access them externally.

Functional magnetic resonance imaging Researcher checking fMRI images Functional magnetic resonance imaging or functional MRI (fMRI) is a functional neuroimaging procedure using MRI technology that measures brain activity by detecting associated changes in blood flow.[1] This technique relies on the fact that cerebral blood flow and neuronal activation are coupled. When an area of the brain is in use, blood flow to that region also increases. Learning Styles Assessment Printer-Friendly Version Learning styles refer to the ways you prefer to approach new information. Each of us learns and processes information in our own special ways, though we share some learning patterns, preferences, and approaches. Knowing your own style also can help you to realize that other people may approach the same situation in a different way from your own.

Making Sense of the World, Several Senses at a Time Our five senses–sight, hearing, touch, taste and smell–seem to operate independently, as five distinct modes of perceiving the world. In reality, however, they collaborate closely to enable the mind to better understand its surroundings. We can become aware of this collaboration under special circumstances. In some cases, a sense may covertly influence the one we think is dominant. Anatomy and Physiology Learning Modules - CEHD - U of M Quiz Bowl and Timed Test were retired at the end of summer 2013. Quiz Bowl had always been buggy, as many people had pointed out, and it had become difficult to maintain. It also used technology that doesn’t work on a lot of newer computers or tablets.

Diffusion MRI Diffusion MRI (or dMRI) is a magnetic resonance imaging (MRI) method which came into existence in the mid-1980s.[1][2][3] It allows the mapping of the diffusion process of molecules, mainly water, in biological tissues, in vivo and non-invasively. Molecular diffusion in tissues is not free, but reflects interactions with many obstacles, such as macromolecules, fibers, membranes, etc. Water molecule diffusion patterns can therefore reveal microscopic details about tissue architecture, either normal or in a diseased state. The first diffusion MRI images of the normal and diseased brain were made public in 1985.[4][5] Since then, diffusion MRI, also referred to as diffusion tensor imaging or DTI (see section below) has been extraordinarily successful. Its main clinical application has been in the study and treatment of neurological disorders, especially for the management of patients with acute stroke.

Online Creative Writing Courses Offered Free by Top Universities and Educational Websites Getting Educated for Free 1. Introductory Courses The Brain: A Body Fit for a Freaky-Big Brain Aiello and Wheeler noted that this dramatic increase in brain size would seem to have required a dramatic increase in metabolism—the same way that adding an air-conditioning system to a house would increase the electricity bill. Yet humans burn the same number of calories, scaled to size, as other primates. Somehow, Aiello and Wheeler argued, our ancestors found a way to balance their energy budget. As they expanded their brains, perhaps they slimmed down other organs.

Anatomy Videos <span>To use the sharing features on this page, please enable JavaScript.</span> These animated videos show the anatomy of body parts and organ systems and how diseases and conditions affect them. The videos play in QuickTime format. If you do not have QuickTime, you will be prompted to obtain a free download of the software before you view a video.

Creative Writing 101 RJ Great article. Morning is definitely the time where I am most creative. I think it’s because my mind is the freshest and the least cluttered at this time of day. Doug Rosbury When I write, it is with an emphasis on the sharing of wisdom arising from my life experience. Wether one could reasonably term such writing as being creative or not I don’t necessarily concern myself with.

The Secrets of Your Brain's Zoom Lens Notice that, even as you fixate on the screen in front of you, you can still shift your attention to different regions in your peripheries. For decades, cognitive scientists have conceptualized attention as akin to a shifting spotlight that “illuminates” regions it shines upon, or as a zoom lens, focusing on things so that we see them in finer detail. These metaphors are commonplace because they capture the intuition that attention illuminates or sharpens things, and thus, enhances our perception of them. Some of the important early studies to directly confirm this intuition were conducted by NYU psychologist Marisa Carrasco and colleagues, who showed that attention enhances the perceived sharpness of attended patterns.

Related:  Neuroads
Related:  Neuroscience   -  Gestalt psychology - Wikipedia, the free encyclopedia   -  MSNBC - How to Think About the Mind   -  Watch Psychology Documentaries Online Free   -  Clearing the Mind: How the Brain Cuts the Clutter | Mind, Brain & Senses | LiveScience   -  Think faster focus better and remember moreRewiring our brain to stay younger... - YouTube   -  Super Brain - Part 1 of 8 - YouTube   -  Drawing on the Right Side of the Brain   -  The Brain: A Body Fit for a Freaky-Big Brain | DiscoverMagazine.com   -  Neuroscience of Music – How Music Enhances Learning Through Neuroplasticity | Neuroscience News Research Articles | Neuroscience Social Network   -  Neurogenesis - Wikipedia, the free encyclopedia   -  Transparent Corporation   -  Less Empathy Toward Outsiders: Brain Differences Reinforce Preferences For Those In Same Social Group -- ScienceDaily   -  Reconstructing visual experiences from brain activity evoked by natural movies - GallantLabUCB   -  Brain Facts and Figures   -  The Neuroscience of Emotions - YouTube   -  TO UNDERSTAND IS TO PERCEIVE PATTERNS on Vimeo   -  Brain Structures and Their Functions   -  30 Amazing Facts About Your Brain - A Daring Adventure   -  7 Ways to Enhance Focus, Creativity, Productivity and Performance | Psychology Today   -  THE BRAIN FROM TOP TO BOTTOM   -  What is the Self? - YouTube   -  MIT discovers the location of memories: Individual neurons   -  Researchers show that memories reside in specific brain cells | MIT News Office   -  Le cerveau à tous les niveaux   -  Problem loading page   -  Brain is not fully mature until 30s and 40s   -  Know Your Neurons: How to Classify Different Types of Neurons in the Brain’s Forest | Brainwaves, Scientific American Blog Network   -  Neuropsychology - Wikipedia, the free encyclopedia   -  In the Shadow of Hegel: How Does Thought Arise Out of Matter? | Postcards from Žižek | Big Think   -  First map of the human brain reveals a simple, grid-like structure between neurons | ExtremeTech   -  The Neuroscience of Creativity and Insight | Think Tank | Big Think   -  How to Plot a Novel With Index Cards | eHow   -  How It Works | Holacracy