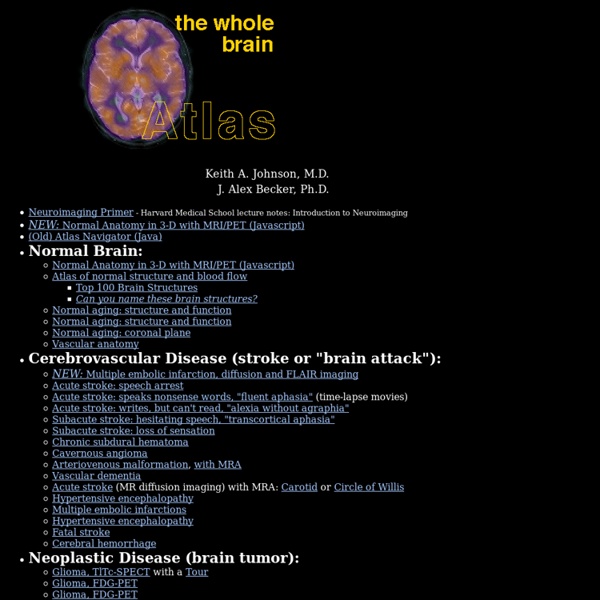 A Glance at the Brain’s Circuit Diagram A new method facilitates the mapping of connections between neurons. The human brain accomplishes its remarkable feats through the interplay of an unimaginable number of neurons that are interconnected in complex networks. A team of scientists from the Max Planck Institute for Dynamics and Self-Organization, the University of Göttingen and the Bernstein Center for Computational Neuroscience Göttingen has now developed a method for decoding neural circuit diagrams. Using measurements of total neuronal activity, they can determine the probability that two neurons are connected with each other. The human brain consists of around 80 billion neurons, none of which lives or functions in isolation.

120 Ways to Boost Your Brain Power - StumbleUpon Here are 120 things you can do starting today to help you think faster, improve memory, comprehend information better and unleash your brain’s full potential. Solve puzzles and brainteasers.Cultivate ambidexterity. Use your non-dominant hand to brush your teeth, comb your hair or use the mouse. Write with both hands simultaneously. Switch hands for knife and fork.Embrace ambiguity. Learn to enjoy things like paradoxes and optical illusions.Learn mind mapping.Block one or more senses.

Autism and Neuropsychology, by Marisa Marzillo Autism is a lifelong disorder that has become the discussion of many media outlets; it is a disorder that causes abnormal neurological development. It seems that lately autism prevalence is increasing, which is causing a demand for professionals to investigate on what causes autism. Autism disorder is characterized by different behavior including social impairments, difficulty in communication, and restrictive patterns of behavior. Individuals living with autism don’t have a lower IQ than most people, but it is common that they have weak social interaction. Researchers have stated that it is unclear what causes autism; it ranges from environmental surroundings to a strain on normal brain development. The three main subjects that researchers have said are a cause of autism are brain development, genes, and environmental.

Exercise Plus Fasting May Boost Brain's Neurons Forget what you've heard about "brain food"...turns out, the best food for your brain may be none at all. New research on intermittent fasting and exercise show some surprising brain benefits of depriving yourself of calories -- at least occasionally. "We have evidence that exercise and probably intermittent fasting increase the number of mitochondria in neurons," said Mark Mattson, a neuroscientist at the National Institute on Aging in Baltimore. So far, Mattson and other researchers have studied the phenomenon in animals, and are beginning to understand how intermittent fasting in rats and mice can enhance learning and memory, and how it can decrease the risk of those brain functions degenerating.

Buddhist Meditation in Thailand text Buddhist Meditation in Thailand Any of us have at one time or another found the toll of living in the modern world hard to bear. Stress, depression and disillusionment are some of the diseases of modern times that leave us yearning for a solution, a cure, so to speak. Department of Neurobiology and Anatomy - The University of Texas Medical School at Houston Welcome to Neuroscience Online, the Open-Access Neuroscience Electronic Textbook This online, interactive courseware for the study of neuroscience is provided by the Department of Neurobiology and Anatomy at The University of Texas Medical School at Houston. The project is being developed under the direction of the Department Chair and Editor, John H. Byrne. This content is intended to function as an online multimedia resource, and therefore is not supported as a downloadable or printable text.