5 Ways To Hack Your Brain Into Awesomeness 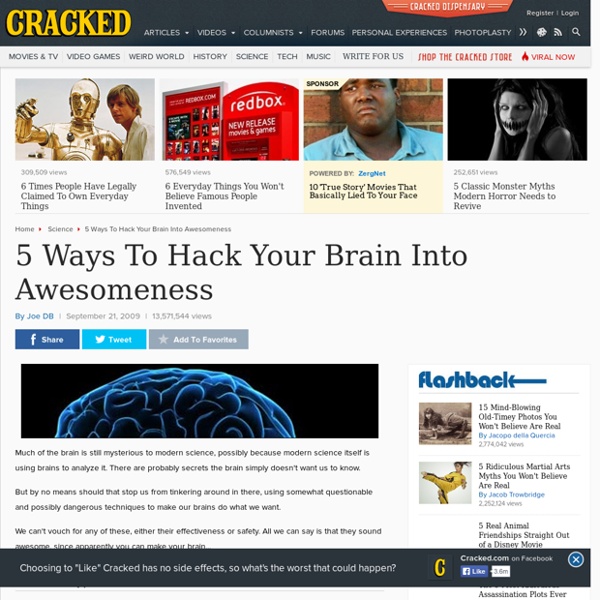 Much of the brain is still mysterious to modern science, possibly because modern science itself is using brains to analyze it. There are probably secrets the brain simply doesn't want us to know. But by no means should that stop us from tinkering around in there, using somewhat questionable and possibly dangerous techniques to make our brains do what we want. We can't vouch for any of these, either their effectiveness or safety. All we can say is that they sound awesome, since apparently you can make your brain... #5. So you just picked up the night shift at your local McDonald's, you have class every morning at 8am and you have no idea how you're going to make it through the day without looking like a guy straight out of Dawn of the Dead, minus the blood... hopefully. "SLEEEEEEEEEP... uh... What if we told you there was a way to sleep for little more than two hours a day, and still feel more refreshed than taking a 12-hour siesta on a bed made entirely out of baby kitten fur? Holy Shit!

Related:  Psychology • kpjete • The human brain and the mind • Type A

Top 10 Thinking Traps Exposed Our minds set up many traps for us. Unless we’re aware of them, these traps can seriously hinder our ability to think rationally, leading us to bad reasoning and making stupid decisions. Features of our minds that are meant to help us may, eventually, get us into trouble. Here are the first 5 of the most harmful of these traps and how to avoid each one of them. 1. Why Atheism Will Replace Religion: New Evidence Atheists are heavily concentrated in economically developed countries, particularly the social democracies of Europe. In underdeveloped countries, there are virtually no atheists. Atheism is a peculiarly modern phenomenon. Why do modern conditions produce atheism? In a new study to be published in August, I provided compelling evidence that atheism increases along with the quality of life (1). First, as to the distribution of atheism in the world, a clear pattern can be discerned.

What cannabis actually does to your brain - io9 Chances are they would've ended up brainless morons with or without the pot. It's quite frankly not strong enough of a narcotic to destroy one's life such as you describe. It's very dependent on the user's persona. @Tadashii: Are you also for alcohol and tobacco prohibition? Those ruin more lives every year then marijuana has ever. Wow- Tadashii, pot is not meth or cocaine.

How to Boost Your Productivity Sure, it’s super trendy, and you’ve probably heard it before, but meditation is scientifically proven to make you more productive! The number of successful, clearly productive people who meditate is near infinite (yes, an infinite number of successful people meditate), and includes hot shots like Oprah, Kobe Bryant, Arianna Huffington, Jerry Seinfeld, and, like, everyone else in Hollywood and Silicon Valley. There’s a reason for it. Meditation increases focus and alertness and decreases stress, and all of those things make you more productive. Lucid Dreaming By lucid dreaming, you can gain complete control over the one place that no one will ever care about: your imagination. Just The Facts Lucid dreaming is a scientifically proven phenomenon. While some get into lucid dreaming in order to treat chronic nightmares, or to experience all facets of the human experience, approximately 99.8% of people use it as a tool for cheap and interactive 3D porn. A lucid dream is a dream in which the dreamer is aware that he or she is dreaming, and he or she can even choose to control and manipulate his or her dream.

Hedgehog's dilemma Both Arthur Schopenhauer and Sigmund Freud have used this situation to describe what they feel is the state of individual in relation to others in society. The hedgehog's dilemma suggests that despite goodwill, human intimacy cannot occur without substantial mutual harm, and what results is cautious behavior and weak relationships. With the hedgehog's dilemma, one is recommended to use moderation in affairs with others both because of self-interest, as well as out of consideration for others.

7 Skills To Become Super Smart People aren’t born smart. They become smart. And to become smart you need a well-defined set of skills. Here are some tips and resources for acquiring those skills. Rare but Real: People Who Feel, Taste and Hear Color When Ingrid Carey says she feels colors, she does not mean she sees red, or feels blue, or is green with envy. She really does feel them. She can also taste them, and hear them, and smell them. Tips for a Healthier Morning Routine Flickr/with wind Eat something, even if it's not a classic breakfast Look, you don't have to wake up, put on a starched shirt and sit down for a full breakfast of pancakes, eggs, and toast.

100 Websites You Should Know and Use Entertainment Meet David Peterson, who developed Dothraki for Game of Thrones There are seven different words in Dothraki for striking another person with a sword. Among them: “hliziﬁkh,” a wild but powerful strike; “hrakkarikh,”a quick and accurate strike; and “gezrikh,” a fake-out or decoy strike. But you won’t find these words in George R. Does the comfort of conformity ease thoughts of death? - life - 25 February 2011 AS THE light at the end of the tunnel approaches, the need to belong to a group and be near loved ones may be among your final thoughts. So say Markus Quirin and his colleagues at the University of Osnabrück in Germany. The team prompted thoughts of death in 17 young men with an average age of 23 by asking them whether they agreed or disagreed with a series of statements such as "I am afraid of dying a painful death". At the same time, the men's brain activity was monitored using a functional MRI scanner. To compare the brain activity associated with thoughts of death with that coupled to another unpleasant experience, the team also prompted thoughts of dental pain using statements like "I panic when I am sitting in the dentist's waiting room". Although the threat of dental pain is unpleasant, "it's not a threat of death", Quirin says.

120 Ways to Boost Your Brain Power Here are 120 things you can do starting today to help you think faster, improve memory, comprehend information better and unleash your brain’s full potential. Solve puzzles and brainteasers.Cultivate ambidexterity. Use your non-dominant hand to brush your teeth, comb your hair or use the mouse. Write with both hands simultaneously. Switch hands for knife and fork.Embrace ambiguity.

Related:  cool/webs • Interesting... • Interesting • useful references :) • stuff that will make you smarter • forever.young23 • Brain • training/meditation • Health • Self Help List/ Mind Hacking Sites • Psychology • informative • mind • Intersting Sites • computer • How to-s & Lifehacks • Read • Cool Tips and Tricks • Psychology • naomismith93 • Reading • Cool • random • racompt • facts&news • Cool stuff • Improving • Personal Development • nickbrocious • sophiezisi
Related:  Psychology   -  kpjete   -  The human brain and the mind   -  Type A   -  The Age of Leo (The Leonian Age)   -  Kick The Clutter!!   -  History of Wentworth Institute of Technology   -  thank the fates that i am an athiest!!   -  LEO behaving badly   -  The Hoover Institute   -  ENGLISH IS FUN!!   -  GITAM Institute of Management   -  Hoover Institution   -  Learn fast and forget about forgetting   -  clean sweep assessment   -  The Brain—Information about the Brain   -  5 Simple Ways to Increase Your Intelligence | PickTheBrain | Motivation and Self Improvement   -  CloudTops Web Guide - Interactive Web Navigation   -  ConnectED   -  The Neuroscience of Emotions - YouTube   -  Brain Structures and Their Functions   -  30 Amazing Facts About Your Brain - A Daring Adventure   -  How Memory Works - OnlineColleges.net   -  How to fold a suit, pants and shirt to go in a suitcase without wrinkling - YouTube   -  7 Ways to Enhance Focus, Creativity, Productivity and Performance | Psychology Today   -  18 Ways To Travel For Free Or Next To Nothing | Traveldudes.org   -  Messy chunky beach waves... Easy tutorial! | Wonder Forest: Design Your Life.   -  Life Hacks For Real Life - Gallery   -  Software gives visual representation of who’s following you online | The Raw Story   -  What is the Self? - YouTube   -  Can you name the answers to these 50 riddles? - Sporcle Games & Trivia   -  Watch Whose Line is it Anyway? Free!