Oliver Sacks: What hallucination reveals about our minds 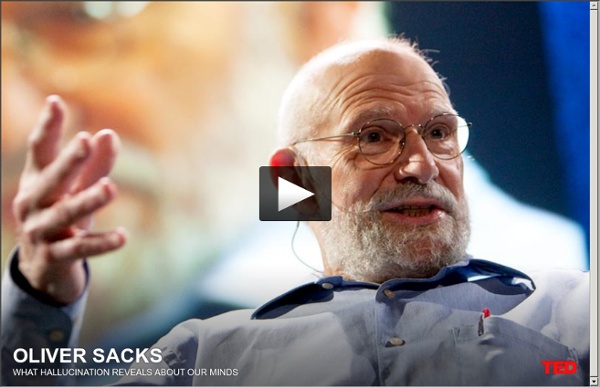 Making Mouse Memories In the movie Eternal Sunshine of the Spotless Mind, scientists erase troubling memories from Jim Carrey’s head. In real life, scientists have done the opposite. By reactivating certain nerve cells, researchers make artificial memories pop into mice’s heads. The results, published in the March 23 Science and online March 22 in Nature, offer a deeper understanding of how the brain creates and uses memories. Much of what scientists know about how the brain remembers comes from studies that look for signs of natural memories in the brain or that disrupt memories. In the new work, memories are actually created, says neuroscientist Richard Morris of the University of Edinburgh in Scotland.

Print - 110 Predictions For the Next 110 Years · People will be fluent in every language. With DARPA and Google racing to perfect instant translation, it won't be long until your cellphone speaks Swahili on your behalf. · Software will predict traffic jams before they occur. Synesthesia How someone with synesthesia might perceive (not "see") certain letters and numbers. Synesthetes see characters just as others do (in whichever color actually displayed), yet simultaneously perceive colors as associated to each one. Synesthesia (also spelled synæsthesia or synaesthesia; from the Ancient Greek σύν syn, "together", and αἴσθησις aisthēsis, "sensation") is a neurological phenomenon in which stimulation of one sensory or cognitive pathway leads to automatic, involuntary experiences in a second sensory or cognitive pathway.[1][2][3][4] People who report such experiences are known as synesthetes. Difficulties have been recognized in adequately defining synesthesia:[5][6] many different phenomena have been included in the term synesthesia ("union of the senses"), and in many cases the terminology seems to be inaccurate. A more accurate term may be ideasthesia. Characteristics[edit]

7 Pieces of Wisdom from Socrates Socrates is considered one of the chief founders of Western philosophy. We know Socrates primarily from the accounts of other writers: from his student, Plato, from Xenophon, the historian, as well as from the plays of Aristophanes. Through Plato’s writing (primarily) we’ve come to comprehend the depth of Socrates’ wisdom. Today I want to discuss seven life lessons based on the teachings of Socrates. Temporal lobe epilepsy Introduction[edit] Over forty types of epilepsy are recognised and they are divided into two main categories: Partial seizures and generalized seizures. Partial seizures account for approximately sixty percent of all adult cases.[1] Temporal lobe epilepsy (TLE) is the single most common form of partial seizure.[2] Signs and symptoms[edit] When a seizure begins in the temporal lobe, the symptoms experienced by the patient, and the signs seen by bystanders, depend on the precise location of the seizure focus.

Visions For All Meeting the Almighty takes hallucinatory talent and training. And Hannah, a member of the Vineyard Christian Fellowship, has got it down. Per-Eric Berglund/The Image Bank/Getty Images HEARING VOICES A recent study looked at what characteristics of auditory hallucinations were shared and which differed among healthy participants and psychotic patients. Humanity Healing International “Until he extends his circle of compassion to include all living things, man will not himself find peace.” ~ Albert Schweitzer 1. Acceptance and practice of the philosophy of the interconnection and interrelation among all living and sentient beings. “A man is ethical only when life, as such, is sacred to him, that of plants and animals as that of his fellow men, and when he devotes himself helpfully to all life that is in need of help.” ~Albert Schweitzer

10 Mind-Blowing Theories That Will Change Your Perception of the World Reality is not as obvious and simple as we like to think. Some of the things that we accept as true at face value are notoriously wrong. Scientists and philosophers have made every effort to change our common perceptions of it. The 10 examples below will show you what I mean. God helmet The "God Helmet" refers to an experimental apparatus originally called the "Koren helmet" after its inventor Stanley Koren. It was developed by Koren and neuroscientist Michael Persinger to study creativity and the effects of subtle stimulation of the temporal lobes.[1] Reports by participants of a "sensed presence" while wearing the God helmet brought public attention and resulted in several TV documentaries.[2] The device has been used in Persinger's research in the field of neurotheology, the study of the neural correlates of religion and spirituality. The apparatus, placed on the head of an experimental subject, generates very weak fluctuating magnetic fields, that Persinger refers to as "complex."

A Little Weird? Prone to Depression? Blame Your Creative Brain Whenever you want to do something extraordinary, risky, or scary in your life (something that you know in your heart that you need to do, but it would really be more convenient to ignore it and just not do it), it’s essential to surround yourself with inspiring, encouraging, like-minded people. If they’re leaders in their own right who to a certain degree have done what you long to do, even better. I first met Gwyneth Leech last summer at my nephew’s first birthday party in Brooklyn (she’s my sister’s husband’s cousin). Holding a gun makes you think others are too Wielding a gun increases a person’s bias to see guns in the hands of others, new research from the University of Notre Dame shows. Notre Dame Associate Professor of Psychology James Brockmole, who specializes in human cognition and how the visual world guides behavior, together with a colleague from Purdue University, conducted the study, which will appear in an upcoming issue of Journal of Experimental Psychology: Perception and Performance. In five experiments, subjects were shown multiple images of people on a computer screen and determined whether the person was holding a gun or a neutral object such as a soda can or cell phone.

All-Natural Sleep Aids Do you have trouble falling asleep at night but dread the idea of taking sleeping pills and dealing with potential side effects? If you’re looking for alternate ways to induce the zzz’s, here are some natural remedies that can help lull you into dreamland. MelatoninMela…what? This natural hormone, which is made by the body’s pineal gland, is available over the counter, and many health experts say it can safely help you get drowsy before bed (it may even have immune-stimulating and antioxidant benefits, too). Volunteers needed to test dream-controlling app Volunteers are being sought to try out the Dream:ON iPhone app, which may allow users to determine what sort of dreams they have Image Gallery (2 images) In what is being touted as “the world's largest dream experiment,” a psychologist from Britain’s University of Hertfordshire is inviting volunteers to try using an iPhone app to control their dreams. Prof.

Oliver Sacks talks about the Bonnet syndrome: visual hallucinations caused by randomly firing neurons. The Bonnet hallucinations are distinct from psychotic hallucinations and hallucinations caused by 'temporal lobe epilepsy'. Dr. Sacks discusses how neuron firing in specific areas, cells, or groups of cells, as observed with fMRI, cause different types of images. Dr. Sacks' presentation connects to the overview VS Ramachandran gave about low-tech clinical neurology[VS Ramachandran on your mind | TED]. Would Christopher de Charms' approach of exercising the brain while viewing it via fMRI[Christopher deCharms looks inside the brain | TED] help patients with Bonnet syndrome? by kaspervandenberg Dec 1

Oliver Sacks is a VERY entertaining guy. His books are fascinating. by shinywen Aug 1

Related:  Psicologia
Related:  How the Brain Stops Time | Psychology Today   -  Neuromarketing | The Persuaders | FRONTLINE | PBS   -  Scientists extract images directly from brain ~ Pink Tentacle   -  How to increase serotonin in the human brain without drugs   -  13 Things to Avoid When Changing Habits : zenhabits   -  Sheena Iyengar: The art of choosing | Video on TED.com   -  Sebastian Seung: I am my connectome | Video on TED.com   -  Creativity linked to mental health | Science Codex   -  Gero Miesenboeck reengineers a brain | Video on TED.com   -  Zap of electricity makes you a brighter spark - Telegraph   -  Math Run - Mathgame - how fast are your Math skills? A simple Math Training Game for everyone   -  This Is Your Brain on Metaphors - NYTimes.com - NYTimes.com   -  Self-actualization - Wikipedia, the free encyclopedia   -  Why don’t women just leave abusers?   -  Human Connectome Project |  Mapping the human brain connectivity   -  Neuroplasticity - Wikipedia, the free encyclopedia   -  Oscillatory Thoughts: The neuroscientific study of hallucinogens   -  The biology of dreaming   -  Embodied Cognition [Internet Encyclopedia of Philosophy]   -  Out of Our Brains - NYTimes.com - NYTimes.com   -  The Extended Mind   -  p-124.jpg (JPEG Image, 700x478 pixels)   -  cover-illustration-stern-et.jpg (JPEG Image, 525x365 pixels)   -  Welcome to Forbes   -  The Dark Side of Oxytocin, the Hormone of Love - Ethnocentrism - NYTimes.com   -  10 Websites With Fun Tests To Gauge Your IQ   -  Our brains are wired so we can better hear ourselves speak, new study shows   -  serotonin-and-dopamine.gif (GIF Image, 620 × 398 pixels)   -  Cognitive Atlas   -  Neurogadget   -  Scientists discover how the brain encodes memories at a cellular level | Science Codex   -  Brain Basics - 3D Model of Brain Injury | BrainLine.org   -  How to Improve Your Memory: Tips and Exercises to Boost Brainpower   -  Dyslexic Advantage - To Understand, Build, and Use the Essential Strengths of the Dyslexic Mind   -  Transform Your Mind, Change Your Brain - YouTube