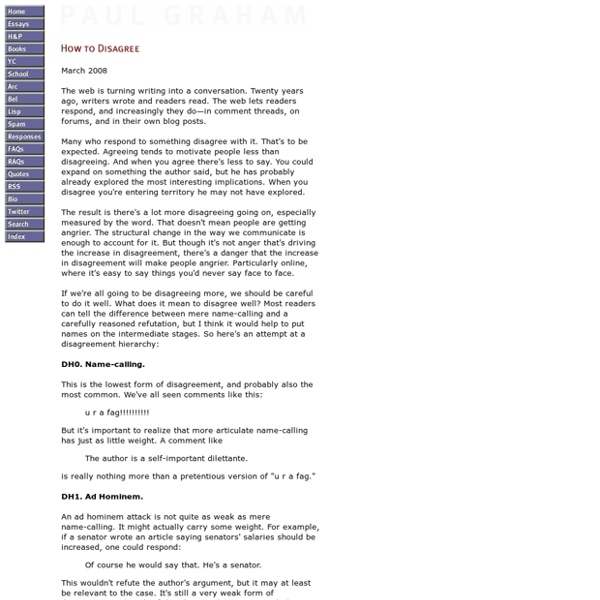 March 2008 The web is turning writing into a conversation. Twenty years ago, writers wrote and readers read. The web lets readers respond, and increasingly they do—in comment threads, on forums, and in their own blog posts. Many who respond to something disagree with it. That's to be expected. The result is there's a lot more disagreeing going on, especially measured by the word. If we're all going to be disagreeing more, we should be careful to do it well. DH0. This is the lowest form of disagreement, and probably also the most common. u r a fag!!!!!!!!!! But it's important to realize that more articulate name-calling has just as little weight. The author is a self-important dilettante. is really nothing more than a pretentious version of "u r a fag." DH1. An ad hominem attack is not quite as weak as mere name-calling. Of course he would say that. This wouldn't refute the author's argument, but it may at least be relevant to the case. DH2. DH3. DH4. DH5. DH6. What It Means Related:

Critical Thinking Model 1 To Analyze Thinking We Must Identify and Question its Elemental Structures Standard: Clarityunderstandable, the meaning can be grasped Could you elaborate further? The Top 10 Relationship Words That Aren't Translatable Into English Here are my top ten words, compiled from online collections, to describe love, desire and relationships that have no real English translation, but that capture subtle realities that even we English speakers have felt once or twice. As I came across these words I’d have the occasional epiphany: “Oh yeah! That’s what I was feeling...” Mamihlapinatapei (Yagan, an indigenous language of Tierra del Fuego): The wordless yet meaningful look shared by two people who desire to initiate something, but are both reluctant to start. Oh yes, this is an exquisite word, compressing a thrilling and scary relationship moment.

Martin van Creveld welcomes us to the Age of the Muzzle Summary: The West is changing. Martin van Creveld points to one of its darker trends, as the West appears to be reversing its long journey to greater personal freedom. “It was intended that when Newspeak had been adopted once and for all and Oldspeak forgotten, a heretical thought — that is, a thought diverging from the principles of Ingsoc — should be literally unthinkable, at least so far as thought is dependent on words. — From 1984 by George Orwell “Welcome to the age of the muzzle.“

Explicit Groups vs Implicit Groups Kevin Cheng (aka @k), product manager at Twitter and an all around smart guy wrote a great blog post called Can We Ever Digitally Organize Our Friends?. I've been thinking many of the same things that Kevin wrote about since I started to use Google+ a few weeks ago and Kevin's post is a good opportunity to riff on the same ideas. But first, a bit of humor courtesy of someecards: With that out of the way, here's my thinking on grouping things. I don't like to be that organized personally.

Reasoning Resources While people generally think of an argument as a fight, perhaps involving the hurling of small appliances, this is not the case-at least as the term is used in philosophy. In philosophy, an argument is a set of claims, one of which is supposed to be supported by the others. There are two types of claims in an argument. The first type of claim is the conclusion. This is the claim that is supposed to be supported by the premises. A single argument has one and only one conclusion, although the conclusion of one argument can be used as a premise in another argument (thus forming an extended argument).

Fairy Tales Can Come True Here's a "photo story" based on the book, Fairy Tales Can Come True (Just Not Every Day!), published by Shake It! Books. You'll have a few giggles... and learn a few things as well! Falling in love is the easy part. It's staying that way that takes some work. Andrew Sullivan: We All Live on Campus Now Over the last year, the most common rebuttal to my intermittent coverage of campus culture has been: Why does it matter? These are students, after all. They’ll grow up once they leave their cloistered, neo-Marxist safe spaces. Mapping out a new era in brain research The Human Connectome Project is giving neuroscientists a new perspective on the connections in the brain and how they communicate with each other. Copyright Laboratory of Neuro Imaging, UCLA and Randy Buckner, PhD. Martinos Center for Biomedical Imaging, MGH. www.humanconnectomeproject.org

Fallacies Dr. Michael C. Labossiere, the author of a Macintosh tutorial named Fallacy Tutorial Pro 3.0, has kindly agreed to allow the text of his work to appear on the Nizkor site, as a Nizkor Feature. It remains © Copyright 1995 Michael C. Labossiere, with distribution restrictions -- please see our copyright notice. If you have questions or comments about this work, please direct them both to the Nizkor webmasters (webmaster@nizkor.org) and to Dr.

50 Best Cheap Date Ideas - Handmade Wedding Posted July 20, 2012 | 110 Comments The weekend is right around the corner and we thought it was a great opportunity to share this fun weekend-ready post. For some couples, once they get engaged the ‘dates’ go right out the window, traded in for constant wedding planning. We say… bring on the date nights! Take a (temporary) wedding planning break once in awhile to remember why you’re tying the knot in the first place. Do Britain's Muslims Have a Right Not to be Offended? Religious freedom is one of the core principles of any modern liberal society. As a secularist, I defend the right of religious people to send their children to faith schools, have their children circumcised, or wear the burqa. This does not mean I approve of any of these practices; they should be permissible but not protected from criticism. We should be free to ridicule, lampoon, chastise, critique, etc. every aspect of religious belief that we tolerate.

How to Beat the Odds at Judging Risk Most of us have to estimate probabilities every day. Whether as a trader betting on the price of a stock, a lawyer gauging a witness's reliability or a doctor pondering the accuracy of a diagnosis, we spend much of our time—consciously or not—guessing about the future based on incomplete information. Unfortunately, decades of research indicate that humans are not very good at this. Most of us, for example, tend to vastly overestimate our chances of winning the lottery, while similarly underestimating the chances that we will get divorced. Psychologists have tended to assume that such biases are universal and virtually impossible to avoid.