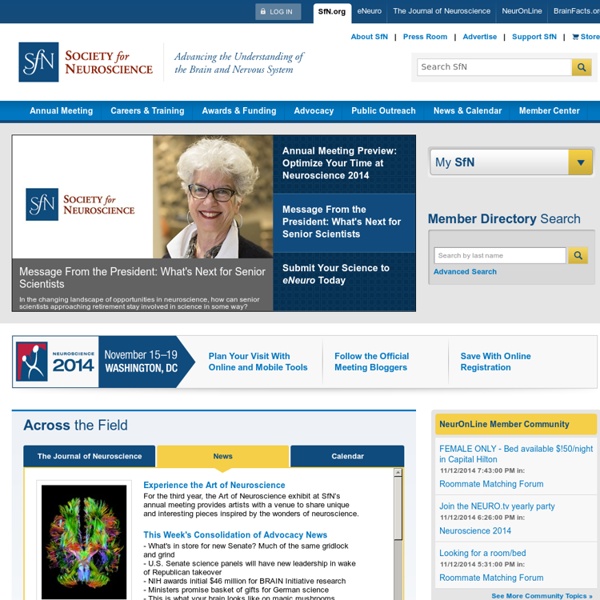 April 18, 2014 - This Week's Consolidation of Advocacy News - NIH and AHRQ announce updated policy for application submission - Animals with human rights will be more than a pet peeve for researchers - H.R. 4472: US-Israel Global Neuroscience Partnership Act of 2014 - Finding may explain why women more likely develop Alzheimer's - Videos: A (very) close look inside the zebrafish brain - Rescuing US biomedical research from its systemic flaws - Brain scans: Don’t throw out the baby with the dead salmon Abstract Submission Now Open Submit an abstract for Neuroscience 2014 by 5 p.m. EDT on Thursday, May 8. SfN Members Advocate for Increased Science Research

Wellcome Trust report reviews two decades of human functional brain imaging 6 September 2011 Twenty years after the publication of the first human study using functional magnetic resonance imaging (fMRI)* - a technique to measure activity in the brain through the flow of blood - the Wellcome Trust has published a report providing reflections on the field of human functional brain imaging. The Wellcome Trust report assesses the key developments in human functional brain imaging and examines the role it has played as a funder. Category:Neuroscience Neuroscience is a field of study which deals with the structure, development, genetics, biochemistry, physiology, pharmacology and pathology of the nervous system. Neurology, which literally means neuroscience, is a branch of medicine primarily interested in, but by no means restricted to studying pathology. Neurobiology is another synonym that exists in few languages, but is generally identical when it is not meant as a subcategory. Subcategories This category has the following 34 subcategories, out of 34 total.

Hodgkin–Huxley model Basic components of Hodgkin–Huxley-type models. Hodgkin–Huxley type models represent the biophysical characteristic of cell membranes. The lipid bilayer is represented as a capacitance (Cm). What DON'T we know about the brain? Vast amounts, whole oceans and skies worth Every so often something comes in one of my Google alerts about how much we do not know about the brain. Those articles and posts make me smile as they are excellent reminders to stay away from brain statements, schemes, and stories that are overreaching or even fantasy extrapolations. No matter how many of these pieces appear that describe our paucity of knowledge, we still see many more articles purporting to tell us how our brains behave and often how to use that information to change other people or ourselves. Of course, what we know so far about the brain can be very helpful in changing and creating habits, and in communicating with others. But we don't know as much as many would have you believe.

Neuropsychology course Cognitive neuropsychology is the area of psychology that studies brain-damaged patients to understand the workings of our brain. Our brain is constructed of two hemispheres which are responsible for different facets of human personality and behaviour. Despite some essential differences in some functions, these hemispheres communicate through inter-hemispheric neural connections, most through the corpus callosum. This communication allows the brain to integrate different elements to produce coordinated, apparently seamless action and a unified personality Our behaviour, personality and thought processes are affected by neurobiological processes and can be altered by any damage to our nervous system.

Quantitative models of the action potential Hodgkin–Huxley model[edit] Equivalent electrical circuit for the Hodgkin–Huxley model of the action potential. Im and Vm represent the current through, and the voltage across, a small patch of membrane, respectively. The Cm represents the capacitance of the membrane patch, whereas the four g's represent the conductances of four types of ions. The two conductances on the left, for potassium (K) and sodium (Na), are shown with arrows to indicate that they can vary with the applied voltage, corresponding to the voltage-sensitive ion channels.

Brain rhythm predicts ability to sleep through a noisy night Ever wonder why some people can sleep through just about anything, while others get startled awake at each and every bump in the night? People who have trouble sleeping in noisy environments often resort to strategies like earplugs or noise-cancelling headphones that muffle the sound, but a new study from investigators at Massachusetts General Hospital (MGH) may lead to ways to block disturbing sounds within the brain. In their report in the August 10 issue of Current Biology, the team reports finding a brain-wave pattern, reflecting activity of a key structure, that predicts the ease at which sleep can be disrupted by noise. "We wanted to investigate what the brain does to promote stable sleep, even in the face of noise, and why some people are better at staying asleep than others," explains Jeffrey Ellenbogen, MD, chief of the MGH Division of Sleep Medicine.

Steven Poole – On teleology It was an idea long consigned to the dustbin of scientific history. ‘Like a virgin consecrated to God,’ Francis Bacon declared nearly 400 years ago, it ‘produces nothing’. It was anti-rational nonsense, the last resort of unfashionable idealists and religious agitators. And then, late last year, one of the world’s most renowned philosophers published a book arguing that we should take it seriously after all. Biologists and philosophers lined up to give the malefactor a kicking.

List of unsolved problems in neuroscience Some of the yet unsolved problems of neuroscience include: References[edit] External links[edit] Central pattern generator Central pattern generators (CPGs) are biological neural networks that produce rhythmic patterned outputs without sensory feedback.[1][2] CPGs have been shown to produce rhythmic outputs resembling normal "rhythmic motor pattern production" even in isolation from motor and sensory feedback from limbs and other muscle targets.[1][2] To be classified as a rhythmic generator, a CPG requires: 1. "two or more processes that interact such that each process sequentially increases and decreases, and 2. that, as a result of this interaction, the system repeatedly returns to its starting condition.[1] Anatomy and physiology[edit] Localization[edit]