Dyslexic Advantage - Dyslexia is an advantage. Teen brain may be primed for addiction. How Chocolate Keeps Your Brain Healthy. What's the Latest Development? 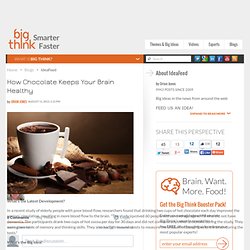 In a recent study of elderly people with poor blood flow, researchers found that drinking two cups of hot chocolate each day improved the seniors' circulation, resulting in more blood flow to the brain. "The study involved 60 people with an average age of 73 who did not have dementia. The participants drank two cups of hot cocoa per day for 30 days and did not consume any other chocolate during the study.

They were given tests of memory and thinking skills. They also had ultrasounds tests to measure the amount of blood flow to the brain during the tests. " Future Actions Decoded And Predicted In The Human Brain » The Behavioral Medicine Report. Bringing the real world into the brain scanner, researchers at The University of Western Ontario from The Centre for Brain and Mind can now determine the action a person was planning, mere moments before that action is actually executed. Included in this report is several videos – one that shows FMRI data and another that contains interviews with the two lead researchers.

The findings were published this week in the prestigious Journal of Neuroscience, in the paper, “Decoding Action Intentions from Preparatory Brain Activity in Human Parieto-Frontal Networks.” “This is a considerable step forward in our understanding of how the human brain plans actions,” says Jason Gallivan, a Western Neuroscience PhD student, who was the first author on the paper. A volunteer completes tasks while in the functional magnetic imaging (fMRI) machine. This research project focuses on understanding how the human brain plans actions. Material adapted from University of Western Ontario . Dr. First human brain-to-brain interface. University of Washington researcher Rajesh Rao, left, plays a computer game with his mind. 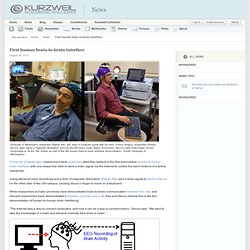 Across campus, researcher Andrea Stocco, right, wears a magnetic stimulation coil over the left motor cortex region of his brain. Stocco’s right index finger moved involuntarily to hit the “fire” button as part of the first human brain-to-brain interface demonstration. Ed Boyden: A light switch for neurons. The Neuroscience Of Music. Why does music make us feel? 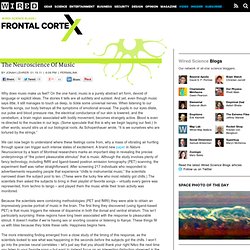 On the one hand, music is a purely abstract art form, devoid of language or explicit ideas. The stories it tells are all subtlety and subtext. Redirect to 26.2 Quest. Managing with the Brain in Mind. Naomi Eisenberger, a leading social neuroscience researcher at the University of California at Los Angeles (UCLA), wanted to understand what goes on in the brain when people feel rejected by others. 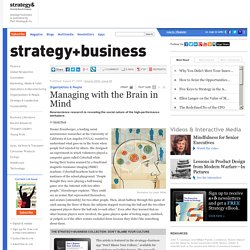 She designed an experiment in which volunteers played a computer game called Cyberball while having their brains scanned by a functional magnetic resonance imaging (fMRI) machine. Cyberball hearkens back to the nastiness of the school playground. “People thought they were playing a ball-tossing game over the Internet with two other people,” Eisenberger explains. “They could see an avatar that represented themselves, and avatars [ostensibly] for two other people. The Twitter-tag neuroscience Daily. The Art of Good Humor. 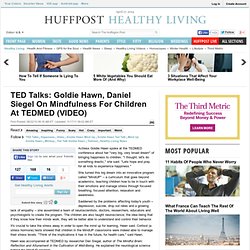 "I thought, let's do something drastic," she said. "Lets hope and pray for all kids to experience happiness. " She turned this big dream into an innovative program called "MindUP" -- a curriculum that goes beyond academics, teaching children how to be in touch with their emotions and manage stress through focused breathing, focused attention, relaxation and awareness. Neuroscience. Neuroscience. Neuroscience is the scientific study of the nervous system.[1] Traditionally, neuroscience has been seen as a branch of biology. 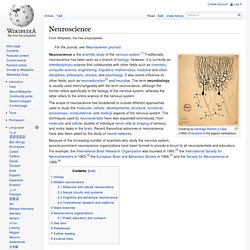 However, it is currently an interdisciplinary science that collaborates with other fields such as chemistry, computer science, engineering, linguistics, mathematics, medicine and allied disciplines, philosophy, physics, and psychology. It also exerts influence on other fields, such as neuroeducation[2] and neurolaw. AtGoogleTalks. AtGoogleTalks (or @Google Talks or Talks@Google) is a series of presentations by invited speakers sponsored by Google given at various Google offices throughout the world. 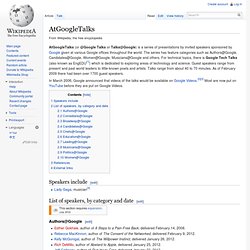 The series has feature categories such as Authors@Google, Candidates@Google, Women@Google, Musicians@Google and others. For technical topics, there is Google Tech Talks (also known as EngEDU[1]) which is dedicated to exploring areas of technology and science. Guest speakers range from present and past world leaders to little-known poets and artists. Talks range from about 40 to 70 minutes.

As of February 2009[update] there had been over 1700 guest speakers. In March 2006, Google announced that videos of the talks would be available on Google Videos.[2][3] Most are now put on YouTube before they are put on Google Videos. Speakers include[edit] Cognitive Neuroscience of Mindfulness Meditation. Change your Mind Change your Brain: The Inner Conditions... The Cognitive and Computational Neuroscience of Categorization,

Rubin Museum of Art:Brainwave 2010. If you are only now catching up with Brainwave, or you want to revisit some of the best of the last seven years, this ten-episode DVD is available at the museum’s Shop or online at What happens in our brains when we attempt to overcome adversity, survive tests of endurance and stay focused under pressure? 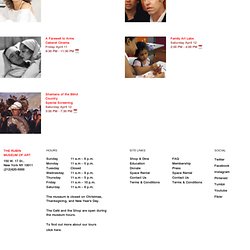 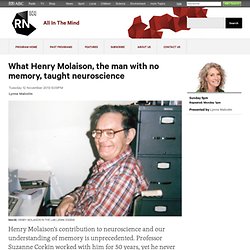 Professor Suzanne Corkin worked with him for 50 years, yet he never knew who she was, as Lynne Malcolm writes. In 1953, Henry Molaison's world was turned upside down by a catastrophic brain operation designed to cure his epilepsy. The Neurobiology of Evil.