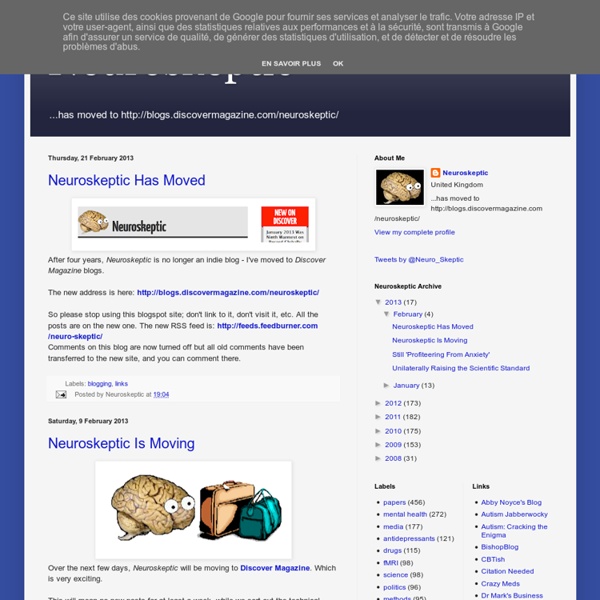 For years, I and others have been arguingthat the current system of publishing science is broken. Publishing and peer-reviewing work only after the study's been conducted and the data analysed allows bad practices - such as selective publication of desirable findings, and running multiple statistical tests to find positive results - to run rampant. So I was extremely interested when I received an email from Jona Sassenhagen, of the University of Marburg, with subject line:Unilaterally raising the standard. Sassenhagen explained that he's chose to pre-register a neuroscience study on a public database, the German Clinical Trials Register (DRKS). His project, Alignment of Late Positive ERP Components to Linguistic Deviations ("P600"), is designed to use EEG to test whether the brain generates a distinct electrical response - the P600 - in response to seeing grammatical errors.

I deleted my Facebook account Today I joined a growing number of dissatisfied former Facebook users by deleting my account. For me, the last straw was when Facebook removed the “interests” section from my profile because I wasn’t willing to link those interests to advertisements for things I was interested in. Facebook made this creepy decision because it doesn’t want the same things that I do. Dreyfus model of skill acquisition In the fields of education and operations research, the Dreyfus model of skill acquisition is a model of how students acquire skills through formal instruction and practicing. Brothers Stuart and Hubert Dreyfus proposed the model in 1980 in an influential, 18-page report on their research at the University of California, Berkeley, Operations Research Center for the United States Air Force Office of Scientific Research.[1] The original model proposes that a student passes through five distinct stages: novice, competence, proficiency, expertise, and mastery. The original five-stage model[edit] Michael Eraut summarized the five stages of increasing skill as follows:[2]

The Daily Brain If I offered to sell you a liquid extract made from the velvety coating of deer antlers, claiming that it will catalyze muscle growth, slow aging, improve athletic performance and supercharge your libido – I’d expect you'd be a little skeptical. But what if I added that a huge percentage of professional athletes are using the stuff and paying top dollar, $100 or more an ounce, and swear up and down that just a few mouth sprays a day provides all benefits as advertised? Would you be willing to give it a try?

Building Wealth- Income and Expenditure Of course the math is simple- if you want to build wealth, there are only two main ingredients. 1) Make more money than you spend, and save the difference. 2) Get a decent rate of return on your savings. Most of this blog focuses on step 2. For step 1 which I touch on only from time to time, I largely avoid the topic of income, as that’s something that is closely tied to one’s profession. Learning styles Learning style is an individual's natural or habitual pattern of acquiring and processing information in learning situations. A core concept is that individuals differ in how they learn.[1] The idea of individualized learning styles originated in the 1970s, and has greatly influenced education.[2] Proponents of the use of learning styles in education recommend that teachers assess the learning styles of their students and adapt their classroom methods to best fit each student's learning style. Although there is ample evidence for differences in individual thinking and ways of processing various types of information, few studies have reliably tested the validity of using learning styles in education.[2] Critics say there is no evidence that identifying an individual student's learning style produces better outcomes. David Kolb's model[edit]

Prismatic How Men's Brains Are Wired Differently Than Women's Men aren't from Mars and women aren't from Venus, but their brains really are wired differently, a new study suggests. The research, which involved imaging the brains of nearly 1,000 adolescents, found that male brains had more connections within hemispheres, whereas female brains were more connected between hemispheres. The results, which apply to the population as a whole and not individuals, suggest that male brains may be optimized for motor skills, and female brains may be optimized for combining analytical and intuitive thinking. "On average, men connect front to back [parts of the brain] more strongly than women," whereas "women have stronger connections left to right," said study leader Ragini Verma, an associate professor of radiology at the University of Pennsylvania medical school.