Center on the Developing Child at Harvard University 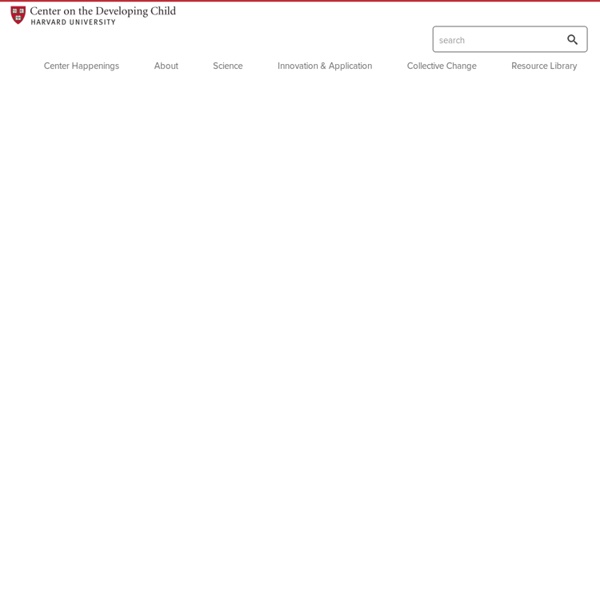 Centar za poticanja osobnog rasta i psihosocijalnog razvoja djece | Psihološki centar Creatus in Webcast Archive Page: 1 of 1 March 11, 2014 Wake up, I'm Speaking: The Neuroscience of Sleep and Dreaming It seems that everybody, from comedians, to poets, to world leaders, have something to say about sleep. October 24, 2013 The Arts and the Brain: What Does Your Brain See? When you listen to music or look at a painting, your brain is busy. September 19, 2013 Neuroenhancement: Building an Improved Human Body and Mind Human enhancement embraces the idea that science and technology can be used to restore or expand cognitive and physical human capacities. June 06, 2013 What Are They Thinking? Advances in brain research have enabled scientists to learn more about how the adolescent brain functions, from the everyday behavior of teenagers to how they cope with the challenges of disease, learning problems and social cues. April 25, 2013 Neuroscience and the Law June 13, 2012 The Aging Brain: What's New in Brain Research, Treatment, and Policy

Parenting Research Centre The Longfellow Lecture Friday, March 13, 2009 Nature-Deficit Disorder: The Movement to Connect Our Children, Ourselves, and Future Generations to the Natural World by Richard Louv Richard Louv is an author and journalist focused on nature, family and community. His most recent book, Last Child in the Woods: Saving Our Children from Nature-Deficit Disorder, has stimulated an international conversation about the future relationship between children and nature. He serves as chairman of the Children & Nature Network, an organization helping to build the international movement to connect children with nature. He also serves as honorary co-chair of The National Forum on Children and Nature. Rich has written for The New York Times, The Washington Post and other publications. The Longfellow Lecture series, inaugurated in 1987, honors the memory of Cynthia Longfellow, '72, Harvard Ed.D. '79, who devoted her professional life to bettering the lives of young children.

Naslovnica - Muzej suvremene umjetnosti Zagreb Interactive Features The Spectrum of Neglect: Four Types of Unresponsive Care Using science as a guide, this interactive chart delineates four types of diminished responsiveness and their consquences in order to provide a useful framework for developing more effective strategies to protect vulnerable children from this complex challenge. The four short video clips below, each under a minute in length, are excerpts from the 6-minute video InBrief: The Science of Neglect. View interactive chart >> Driving Science-Based Innovation in Policy & Practice: A Logic Model This narrated interactive feature presents a logic model showing how policies and programs that strengthen specific kinds of caregiver and community capacities can build the foundations of healthy development. Download "flip chart" (PDF) of this feature >> How Early Experiences Get Into the Body: A Biodevelopmental Framework Download "flip chart" (PDF) of this feature >> How Early Experiences Alter Gene Expression and Shape Development

Rethinking Childhood | Website for Tim Gill Rano Učenje | Program ranog učenja za predškolce "Oblačić znanja" The Drunken Brain: MRS Imaging Yields Clues to Alcohol’s Neural Effects An Interview with Graeme F. Mason, Ph.D. Q: You are studying genetic vulnerability to alcohol dependence and have recently completed a small study using Magnetic Resonance Spectroscopy (MRS) to evaluate alcohol-induced changes in the concentration of certain neurotransmitters. What have you found so far? Graeme F. Q: What do these measurements tell us about how alcohol affects the brain? GFM: Everything the brain does is mediated by chemistry. Certain drugs, such as valium, act on the sites that are targeted by GABA: they make GABA more potent so it inhibits nerve activity more effectively. Q: Did you find effects on neurotransmitters other than GABA? GFM: We also measured glutamate. Some interplay with glutamate was expected. Q: How does this fit with other research about alcohol dependence? GFM: The genetic story of GABRA2 is a big theory in vulnerability to dependence right now, with data to back it. Q: What does this research tell us about gene-brain-behavior interactions?

Kindling: Green makes school So the cliche goes, there are lots of things Germany does well; public transport, sausages, compound nouns... actually all these things are true, but I've been discovering that in Berlin and Hamburg there are some other things that are done well; challenging, exciting and sustainable play provision for children and young people. I recently spent a week in Hamburg and Berlin with a study tour for play professionals co-ordinated by ip-dip.com and www.meynellgames.org. The tour took us to scrapstores, adventure playgrounds, public parks and playspaces, community provision, waldkindergarten and green school playgrounds. On Thursday we spent the day looking at school play ares in Berlin in the company of Manfred from Grün macht Schule; www.gruen-macht-schule.de. Manfred described some of the changes. The play area is in a public park but the school children are all playing on it because they use the public park as their playground.

Smart Marriages A New Study Unlocks Connections within the Brain to Early Language Development: Research Holds Potential to Improve Early Intervention - Thrive By Five WA January 23rd, 2013 by Paul Nyhan Scientists discovered that two parts of the brain not usually associated with language development can predict a child’s linguistic skills by her or his first birthday. The study released by the University of Washington’s Institute for Learning & Brain Sciences (I-LABS) found that children with greater concentration of white and gray matter in the hippocampus and cerebellum by the time they were a year old showed higher language ability. Why is this important for early learning educators and parents? “The brain uses many general skills to learn language,” Patricia Kuhl, co-director of I-LABS said in a research summary. It is also another study that advances scientists’ understanding of how development in early childhood depends on both their biology and their experiences. “Infancy may be the most important phase of postnatal brain development in humans,” said Dilara Deniz Can, the study’s lead author and a UW postdoctoral researcher.

moon sand recipe We love ‘moon sand’ or ‘magic sand’ for sensory sand play. You can buy it from art and craft suppliers, but it is fairly expensive. When we did a post on it a while ago, some kind people sent in the recipe so we could make it ourselves at a fraction of the cost. Mix together: 4 cups sand 2 cups cornflour 1 cup of water. We gave it a go and although different from the commercial sort … it was still very successful. The children had a lot of fun with it. When it dried out in the sun a bit, it crumbled up beautifully and was easily restored with a bit more water added to it. Tags: cornflour, sand, water