Savingbrainsinnovation. How Brains are Built: The Core Story of Brain Development. More than 16 million children in poverty across the U.S. in 2011. Between 2010 and 2011, the child poverty rate rose modestly across the nation to 22.5 percent. 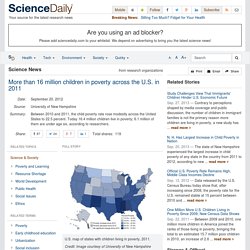 Today 16.4 million children live in poverty; 6.1 million of them are under age six, according to researchers from the Carsey Institute at the University of New Hampshire. In addition, 45 percent -- 32.7 million of America's children -- live in families with incomes below 200 percent of the federal poverty line. "It is important to understand young child poverty specifically, as children who are poor before age 6 have been shown to experience educational deficits, and health problems, with effects that span the life course," the researchers said. To evaluate the changes in child poverty, researchers focused on two time periods -- change since 2007, as the nation entered the recession, and change since 2010.

They also looked at young children -- children under 6 years old -- living in poverty as well as national poverty rates for all children under 18. This analysis is based upon U.S. Poverty's most insidious damage is to a child's brain. An alarming 22 percent of U.S. children live in poverty, which can have long-lasting negative consequences on brain development, emotional health and academic achievement. 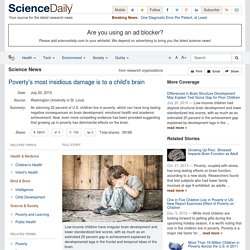 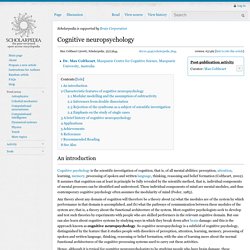 It assumes that cognition can at least in principle be fully revealed by the scientific method, that is, individual components of mental processes can be identified and understood. How Childhood Neglect Harms The Brain. Like any new mother, the woman we’ll call Braille was full of hope and excitement the day she welcomed her son into her life seven years ago. 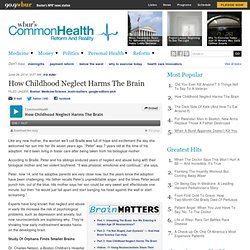 “Peter” was 7 years old at the time of his adoption. He’d been living in foster care after being taken from his biological mother. According to Braille, Peter and his siblings endured years of neglect and abuse living with their biological mother and her violent boyfriend. “It was physical, emotional and continual,” she says. Center on the Developing Child at Harvard University. Brain Hero. Following a two-year collaboration with the Interactive Media Division of the School of Cinematic Arts at the University of Southern California to develop and test new ways of communicating the science of early childhood development, the Center on the Developing Child has released the collaboration’s first product, “Brain Hero.” 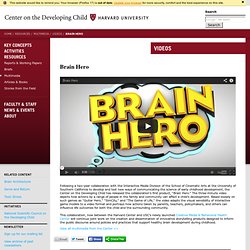 The three-minute video depicts how actions by a range of people in the family and community can affect a child’s development. InBrief: The Science of Neglect. Play, learning and the brain. Early years practitioners have always argued strongly for children to have the opportunity to play in both indoor and outdoor environments. 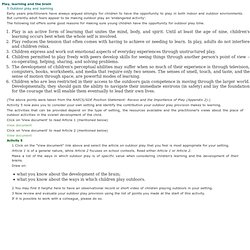 But currently adult fears appear to be making outdoor play an ‘endangered activity’. The following list offers some good reasons for making sure young children have the opportunity for outdoor play time. Interactive Brain Quiz. Interactive Brain Map. Play, learning and the brain. Neuroscientists now have more sophisticated ways of examining living brains than was ever possible before. 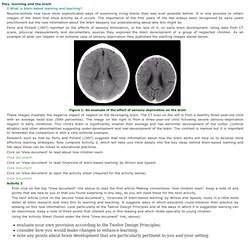 It is now possible to obtain images of the brain that show activity as it occurs. Overview of Brain-Based Learning. Tackling Toxic Stress. Foundation. Five Numbers to Remember About Early Childhood Development. InBrief: Executive Function: Skills for Life and Learning. Mapping Brain Connectivity. The new field of “connectomics” aims to show how brains behave at a level not previously possible—examining how entire brains are wired together, how wiring changes as brains grow up, and how interactions with the external world affect this wiring. 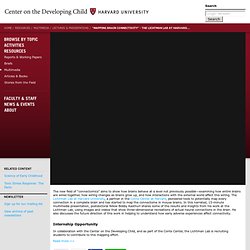 Working Paper #12: The Science of Neglect: The Persistent Absence of Responsive Care Disrupts the Developing. A Science-Based Framework for Early Childhood Policy. Gut Feelings: Bacteria and the Brain - The Dana Foundation. Do Cytokines Really Sing the Blues? Inside the Letterbox: How Literacy Transforms the Human Brain. Editor’s note: Few issues are as important to the future of humanity as acquiring literacy. 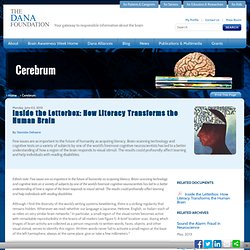 Brain-scanning technology and cognitive tests on a variety of subjects by one of the world’s foremost cognitive neuroscientists has led to a better understanding of how a region of the brain responds to visual stimuli. The results could profoundly affect learning and help individuals with reading disabilities Although I find the diversity of the world’s writing systems bewildering, there is a striking regularity that remains hidden. Whenever we read—whether our language is Japanese, Hebrew, English, or Italian—each of us relies on very similar brain networks.1 In particular, a small region of the visual cortex becomes active with remarkable reproducibility in the brains of all readers (see figure 1). A brief localizer scan, during which images of brain activity are collected as a person responds to written words, faces, objects, and other visual stimuli, serves to identify this region. Pre-K Depression Linked to Changes in Brain Activity. 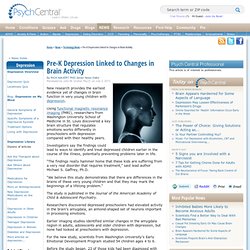 Grohol, Psy.D. on July 2, 2013 New research provides the earliest evidence yet of changes in brain function in very young children with depression. Using functional magnetic resonance imaging (fMRI), researchers from Washington University School of Medicine in St. Louis discovered a key brain structure that regulates emotions works differently in preschoolers with depression compared with their healthy peers. Webcast Archive. Page: 1 of 1 March 11, 2014 Wake up, I'm Speaking: The Neuroscience of Sleep and Dreaming It seems that everybody, from comedians, to poets, to world leaders, have something to say about sleep. So why not scientists? Sleep, or the lack of it, is the focus of considerable research in the United States, where sleep disorders and sleep deprivation have been associated with poor cognitive performance, behavioral problems, accidents, ill health and other factors that adversely affect quality of life.

Interactive Features. The Spectrum of Neglect: Four Types of Unresponsive Care Using science as a guide, this interactive chart delineates four types of diminished responsiveness and their consquences in order to provide a useful framework for developing more effective strategies to protect vulnerable children from this complex challenge. Center on the Developing Child at Harvard University.

Center on the Developing Child at Harvard University. A New Study Unlocks Connections within the Brain to Early Language Development: Research Holds Potential to Improve Early Intervention - Thrive By Five WA. January 23rd, 2013 by Paul Nyhan Scientists discovered that two parts of the brain not usually associated with language development can predict a child’s linguistic skills by her or his first birthday.

Play, Stress, and the Learning Brain. Editor’s note: An extraordinary number of species—from squid to lizards to humans—engage in play. But why? In this article, adapted from Dr. Sam Wang and Dr. The Learning Brain: Lessons for Education. In his widely quoted 1997 article “Education and Neuroscience: A Bridge Too Far?” John Bruer argued that, despite substantial progress in brain research, trying to use its discoveries to shape education policy is both uninformative and misleading.

Hardwired for Math. From What Counts: How Every Brain Is Hardwired for Math by Brain Butterworth. © 1999 by Brian Butterworth. Neuroeducation. Brain and Brain Research Information - Dana Foundation. Your Memories Need Their Sleep. Ann Whitman (212) 223-4040awhitman@dana.org The big test is tomorrow—should you stay up late and study, or cut short the cram session and get a good night’s sleep?

Most if not all students face this dilemma at some point in their lives.