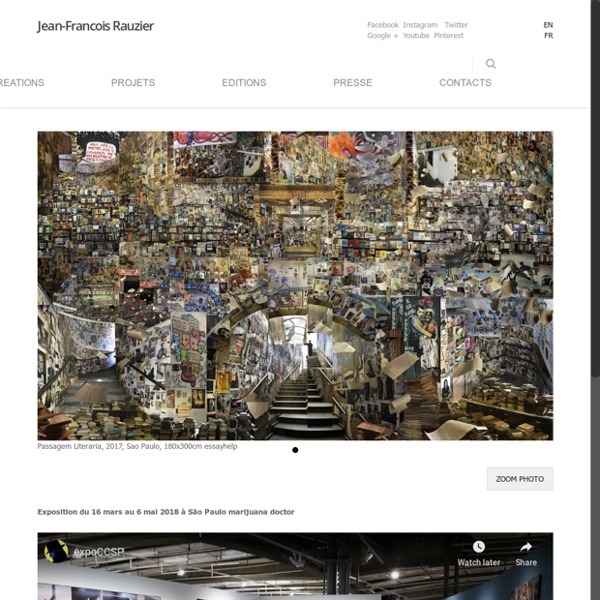 untitled Stockholm, 2-4 November. Catherine de Zegher, Fake Art or Fake News?Open Letter and Signatories 10 & 15 October 2018 In the wake of allegations about paintings from the Russian Avant-Garde collection of Igor and Olga Toporovski exhibited at the Museum of Fine Arts in Ghent from October 2017 to January 2018, there has been considerable support for the director, Catherine de Zegher, from the museum world. Home - AmO Images: Capturing the Beauty of Life - AmO Images: Capturing the Beauty of Life Gleb Goloubetski was born in 1975 in Omsk, Russia, a Siberian town. His father, who died when Gleb was six, was a merited artist of the Soviet Union, and his grandfather was an architect. His mother currently owns a gallery in Omsk. The Flexible Paper Sculptures of Li Hongbo What at first look like delicate works of carved porcelain are actually thousands of layers of soft white paper, carved into busts, skulls, and human forms by Beijing artist Li Hongbo. A book editor and designer, the artist became fascinated by traditional Chinese toys and festive decorations known as paper gourds made from glued layers of thin paper which can be stored flat but then opened to reveal a flower or other shape. He applied the same honeycomb-like paper structure to much larger human forms resulting in these highly flexible sculptures. Hongbo recently had a solo show at Dominik Mersch Gallery in Australia who made the videos above, and you can see much more of his work on their website.

untitled Accusations of “Fakes” InCoRM has just learned from a private collector in Germany that the withdrawal of his works from two of the June sales was provoked by the contact to the German police and telephone calls to the auction houses of a certain “London gallerist”, an art dealer who has been identified as James B., claiming that “the works are fake”. When asked by the auction houses if he had seen the works, James B. is reported to have said, “No, I’ve seen just the photographs in your catalogue”. When told that the works had expertises by reputed scientists and art historians, James B. is said to have replied. Worth1000 Home Welcome fans of Worth1000.com. If you're looking for Worth's amazing creative content, then you've rocked up to the right place! Just in case you missed the news, Worth1000.com is now part of DesignCrowd.com - and we've preserved all the amazing Worth1000 content here so you can search the archives to find old favorites and new contest art. We're delighted to have Worth1000's talented users and their treasure trove of imaginative and original content, built over many years, as part of our design community.

untitled In an open letter circulated today, a group of more than 60 artists and art professionals spoke out against the suspension of Catherine de Zegher as director of the Museum of Fine Arts (the Museum voor Schone Kunsten, or the MSK) in Ghent, Belgium. De Zegher’s suspension was first announced this past March after an Art Newspaper report revealed that the museum had put on a show including what may be fake artworks attributed to Russian avant-garde artists. (In January, the show was taken off view.) The missive follows news reported yesterday by De Standaard that de Zegher has formally filed a complaint with the city of Ghent regarding her suspension. Among those to have signed the letter include artists Eija-Liisa Ahtila, Luis Camnitzer, Cristina Iglesias, Simryn Gill, Mona Hatoum, Giuseppe Penone, Luc Tuymans, and Cecilia Vicuña; art historian Benjamin H. D.

Russian avant-garde forgery case ends in convictions and disappointments A trial in Germany many hoped would help crack down on a flourishing trade in Russian avant-garde forgeries on the international art market has fallen short of its target after a dispute between two divorced art historians left judges unable to decide whether many disputed works were genuine or fake. On Thursday afternoon, Wiesbaden regional court sentenced art dealer Itzhak Zarug, 72, and his business partner Moez Ben Hazaz, 45, to 32 months and three years in prison respectively for having knowingly sold forged pictures and invented the provenance of paintings by El Lissitzky and Kazimir Malevich as well as constructivists such Alexander Rodchenko. For many art experts, however, the ruling was disappointing given the scale of the operation involved. When police arrested the Tel Aviv-born Zarug and German-Tunisian national Ben Hazaz in 2013 after a tip-off from Israeli intelligence, it was hailed as one of the biggest swoops against organised art crime in recent German history.

Traveler Photo Contest 2013 2013 Winners For our 25th annual photo contest, National Geographic Traveler magazine received more than 15,500 entries from skilled photographers from around the globe. Taken in locations ranging from Brazil to Kenya, the winning pictures show everything from quiet landscapes to surprising moments. Did your favorites make the cut? See the winners! Prizes

New Portraits by Kumi Yamashita Made with Nails, Thread, and Denim Two new portraits this morning from one of my favorite artists Kumi Yamashita (previously). The first one is part of her Constellation series titled Mana #2. The portrait is made from a single unbroken sewing thread wrapped through a dense network of galvanized nails, a process that takes several months. The second artwork, Mother #2, is part of her ongoing Warp and Weft series where Yamashita works with a panel of black denim and then meticulously cuts threads from the fabric to form an image. If you happen to be in California, both works will be in a group show from April 20th through June 1st, 2013 at Scott White Contemporary Art in La Jolla. You can also now follow the artist over on Facebook.

untitled The main goal of the Authentication in Art Foundation (AiA) is to stimulate dialogue and the understanding of the authenticity of paintings in all its aspects. These aspects range from understanding the process of (re)discoveries and uncovering forgeries to developing protocols and best practices for authenticity research for catalogues raisonnés, academic research and scholarship As forgeries are an important part of our field, the Authentication in Art Foundation has compiled a list of unmasked forgers. We want to stress out that all information on this list is not of our own finding, but is based on publications and research of other parties into these forgers’ practices