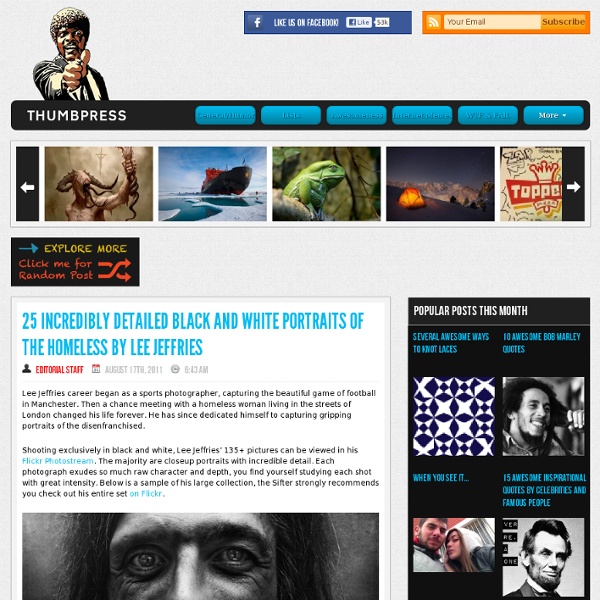 Lee Jeffries career began as a sports photographer, capturing the beautiful game of football in Manchester. Then a chance meeting with a homeless woman living in the streets of London changed his life forever. He has since dedicated himself to capturing gripping portraits of the disenfranchised. Shooting exclusively in black and white, Lee Jeffries’ 135+ pictures can be viewed in his Flickr Photostream. The majority are closeup portraits with incredible detail. Each photograph exudes so much raw character and depth, you find yourself studying each shot with great intensity. Lee Jeffries lives in Manchester in the United Kingdom. Lee Jeffries recalls that, initially, he had stolen a photo from this young homeless girl huddled in a sleeping bag. The models in his photographs are homeless people that he has met in Europe and in the United States: «Situations arose, and I made an effort to learn to get to know each of the subjects before asking their permission to do their portrait.»

The 23 Photos That Will Make Your Stomach Drop Posted by admin on May 1, 2013 in Nature | 39 comments If you love to do something that is uncommon, and what people do just few times in whole year, than you must try to do something like this on photos below. Maybe you will feel strange while you looking at this photos, you will see, who knows.

40 Astounding Examples of Abstract Photography I just love the creativity we see in abstract photography. I love it when a photographer takes an otherwise ordinary shot and shoots it at just the right angle or focus to create a masterpiece of colors, patterns and textures. With abstract photography there is only one rule and that rule is there are no rules. Rules for composition and proper focus don’t really apply. Here are some great examples of abstract photography to inspire you to go out and create your next work of art. World's Most Beautiful Trees Photography - One Big Photo The Portland Japanese Garden is a traditional Japanese garden occupying 5.5 acres (22,000 m²), located within Washington Park in the west hills of Portland, Oregon, USA. Photo by: unknown Huge 750 years old sequoia tree, California. Photo by: Michael Nichols

The Top 50 ‘Pictures of the Day' for 2011 Every day at 5pm the Sifter posts the Picture of the Day. Below you will find a collection of the Sifter’s Top 50 from 2011. It’s hard to imagine the year is almost over, time seems to fly faster each successive year so it’s fun to take a moment and look back at the year that was. Click any of the pictures below to be taken to the individual post to learn more about the photographer and picture taken. Enjoy and stay sifty my friends!

Amazing Places To Experience Around The Globe (Part 1) Preachers Rock, Preikestolen, Norway Blue Caves - Zakynthos Island, Greece Skaftafeli - Iceland New Murals by David de la Mano and Pablo S. Herrero on the Streets of Norway Three new works today from artists David de la Mano and Pablo S. Herrero who collaborated on the streets of Stavanger and Sandnes in Norway to create these lovely figures made of trees and people. The duo joined forces earlier this year in Uruguay and I’m glad to see them continuing to explore this style in other cities. Definitely check out their respective websites for more photos.

Awesome People Hanging Out Together The title is pretty explanatory and it's coming from a very cool blog where they showcase shots of famous people hanging out together from the new and old times. A picture is worth a thousand words and I truly think it's a great idea. It's also a good practice for your personal history so check it out, you won't be disappointed! The 33 Most Beautiful Abandoned Places In The World Many people doesn’t know, and didn’t even heard about these famous abandoned places. Many of these places are really something amazing, but they are also really sad when you take a closer look at them. On the folowing list, you can see abandoned planes, abandoned ships, as well as the abandoned houses, and so many other things, that are really amazing and magnificent. So, check out these amazing abandoned places photos. 1. Christ of the Abyss at San Fruttuoso, Liguria

rare historical photos rare historical photos Rare Historical Photos Pt. 10 [21 Pics] Jan 21 2014 The Flexible Paper Sculptures of Li Hongbo What at first look like delicate works of carved porcelain are actually thousands of layers of soft white paper, carved into busts, skulls, and human forms by Beijing artist Li Hongbo. A book editor and designer, the artist became fascinated by traditional Chinese toys and festive decorations known as paper gourds made from glued layers of thin paper which can be stored flat but then opened to reveal a flower or other shape. He applied the same honeycomb-like paper structure to much larger human forms resulting in these highly flexible sculptures. Hongbo recently had a solo show at Dominik Mersch Gallery in Australia who made the videos above, and you can see much more of his work on their website.

Thomas Barbèy's astounding surrealism Today, everyone’s a photographer, grabbing their iPhones for a quick snap. Pictures are posted at a moment’s notice on Facebook and Instagram, so there’s never a void of visuals. Perhaps this image saturation is why surreal photo manipulation is particularly intriguing; smartphone cameras and social networking can’t hold a candle to an artist’s vivid imagination. Rare and Amazing Historical Photos September 1933 - Adolf Hitler breaks ground on his ambitious plans to link all major German cities with highways. This ceremony kicked off construction of the Frankfurt-am-Maine - Darmstadt/Mannheim highway. Betty White at home with her dog in 1952