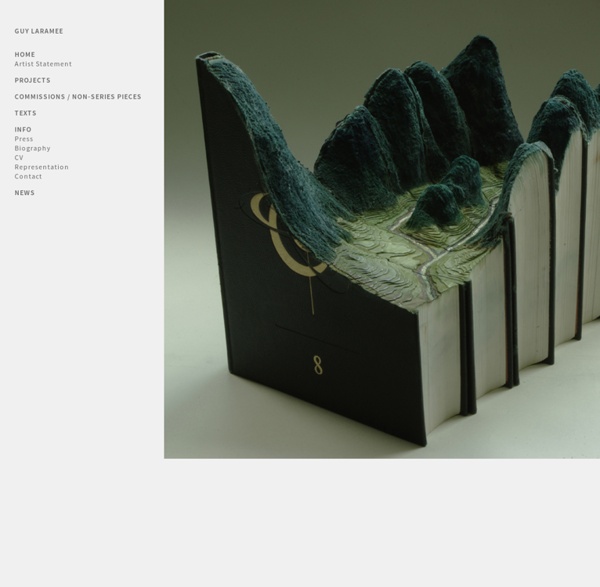 Rembrandt Self-portraits in chronological order Self-portraits in chronological order by REMBRANDT It is particularly interesting if the various stages of the creative renewal of an artist can be followed on self-portraits so that the change in style and the change in maturity can be studied simultaneously. Fictional Landscapes Colossal has seen its fair share of commendable book and paper work the last few weeks, but this was too good to pass up. UK-based artist Kyle Kirkpatrick constructs these wonderfully tiny dioramas using the topographies of carved books. Via the artist: My practice is primarily concerned with the notion of the imagined landscape.

Museum of Arts and Design Collection Database Virtual reality has been a powerful factor in shaping our social and artistic environment since the 1970s. Today, innovations in digital technology have completely transformed film, video, and television: extraordinary special effects and three-dimensional imaging created using computer-based software are commonplace. However, while the digital world continues to expand into more and more areas of our lives, a profound human need to re-experience the actual and tangible has also arisen. It is not a coincidence that as individuals spend more and more time looking at a monitor interacting with others in cyberspace, the pleasures in making things by hand, engaging with materials and techniques in a direct fashion, also increase.

Juan Sánchez Cotán Juan Sánchez Cotán (June 25, 1560 – September 8, 1627) was a Spanish Baroque painter, a pioneer of realism in Spain. His still lifes—also called bodegones—were painted in an austere style, especially when compared to similar works in the Netherlands and Italy. Life[edit] Sánchez Cotán was born in the town of Orgaz, near Toledo, Spain. Clockwork love paper - Tjep. - Think, amaze. Clockwork Love builds further on the Bling Bling pendant designed by Tjep. for Chi Ha Paura...? Launched in 2002, it was constructed from several layers of overlapping logos. Clockwork Love is a jewelry collection evenly and consistently combining a great multitude of graphic elements in a ...

Do Ho Suh, Fallen Star - Stuart Collection - UC San Diego Do Ho Suh’s Fallen Star is the 18th permanent sculpture commissioned by UCSD’s Stuart Collection. It reflects Suh’s on-going exploration of themes around the idea of home, cultural displacement, the perception of our surroundings, and how one constructs a memory of a space. His own feelings of displacement when he arrived in the U.S. from Seoul, Korea in 1991 to study led him to measure spaces in order to establish relationships with his new surroundings. Wild Animals World by Fumiaki Kawahata You're reading a free preview. Pages 4 to 17 are not shown in this preview. You're reading a free preview.

Anne-Emmanuelle Marpeau Anne-Emmanuelle Marpeau, Beals Island, ex-voto, 20″ x 21″ x 9-1/2″, SOLD Showing image 1 of 19 Biography Anne-Emmanuelle Marpeau calls her artworks ex-votos. Art New Zealand There is an element of mystery surrounding the artistic career of Gordon Walters. Many people would connect his name with only one type of painting: the 'koru' motif works on which his reputation rests. And few would know anything about his stylistic evolution. Yet, when Walters first exhibited his distinctive works in Auckland in 1966 he was no young painter having his first show; nor was he a late starter turning to painting in mid-career.