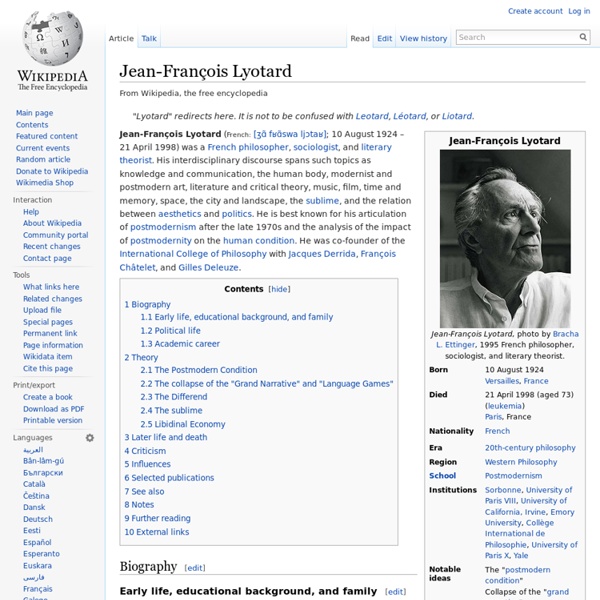 Biography[edit] Early life, educational background, and family[edit] Jean François Lyotard was born on August 10, 1924 in Versailles, France to Jean-Pierre Lyotard, a sales representative, and Madeleine Cavalli. He went to primary school at the Paris lycée Buffon and Louis-le-Grand, and later studied philosophy at the Sorbonne in the late 1940's. As a child, Lyotard had many aspirations: to be an artist, a historian, a Dominican monk, and a writer. He later gave up the dream of becoming a writer when he finished writing an unsuccessful fictional novel at the age of 15. [1] Ultimately, Lyotard describes the realization that he would not become any of these occupations as "fate" in his autobiography called Peregrinations,[2] published in 1986. Political life[edit] In 1954, Lyotard became a member of Socialisme ou Barbarie, a French political organisation formed in 1948 around the inadequacy of the Trotskyist analysis to explain the new forms of domination in the Soviet Union. Theory[edit] Related:  People/Artists

Jean Baudrillard Jean Baudrillard (/ˌboʊdriːˈɑr/;[1] French: [ʒɑ̃ bodʁijaʁ]; 27 July 1929 – 6 March 2007) was a French sociologist, philosopher, cultural theorist, political commentator, and photographer. His work is frequently associated with postmodernism and specifically post-structuralism. Life[edit] Baudrillard was born in Reims, northeastern France, on 27 July 1929. While teaching German, Baudrillard began to transfer to sociology, eventually completing his doctoral thesis Le Système des objets (The System of Objects) under the dissertation committee of Henri Lefebvre, Roland Barthes, and Pierre Bourdieu. In 1970, Baudrillard made the first of his many trips to the United States (Aspen, Colorado), and in 1973, the first of several trips to Kyoto, Japan. In 1986 he moved to IRIS (Institut de Recherche et d'Information Socio-Économique) at the Université de Paris-IX Dauphine, where he spent the latter part of his teaching career. Core ideas[edit] The object value system[edit] [edit] Reception[edit]

Juan Gris José Victoriano (Carmelo Carlos) González-Pérez (March 23, 1887 – May 11, 1927), better known as Juan Gris (Spanish pronunciation: [ˈxwaŋ ˈɡɾis]), was a Spanish painter and sculptor born in Madrid who lived and worked in France most of his life. Closely connected to the innovative artistic genre Cubism, his works are among the movement's most distinctive. Early life[edit] Born in Madrid, Gris studied mechanical drawing at the Escuela de Artes y Manufacturas in Madrid from 1902 to 1904, during which time he contributed drawings to local periodicals. From 1904 to 1905, he studied painting with the academic artist José Moreno Carbonero. Career[edit] In 1906 he moved to Paris and became friends with Henri Matisse, Georges Braque and Fernand Léger. "He appears with two styles", writes art historian Peter Brooke, "In one of them a grid structure appears that is clearly reminiscent of the Goûter and of Metzinger's later work in 1912 Designer and theorist[edit] Death[edit] Art market[edit] Notes

colin ware Colin Ware is the Director of the Data Visualization Research Lab which is part of the Center for Coastal and Ocean Mapping at the University of New Hampshire. He is cross appointed between the Departments of Ocean Engineering and Computer Science. Ware specializes in advanced data visualization and has a special interest in applications of visualization to Ocean Mapping. Ware has published over 150 articles in scientific and technical journals and leading conference proceedings. Ware likes to build useful visualization systems. He directed the development of NestedVision3D, a system for visualizing very large networks of information. Colin Ware's has written two books: Visual Thinking for Design is an up to date account of the psychology of how we think using graphic displays as tools. • Research • Colin Ware's Publications • Course taught by Colin Ware You may contact Dr.

Eric Berne Background and education[edit] Eric was born on May 10, 1910 as Eric Lennard Bernstein in Montreal, Canada to a Jewish family.[1] He and his sister Grace, who was five years younger than Eric, were the children of a physician and a writer, David and Sara Gordon Bernstein.[1] David Bernstein died in 1921, and the children were raised by their mother.[2] Bernstein attended Montreal's McGill University, graduating in 1931 and earning his M.D., C.M. in 1935.[3] While at McGill he wrote for several student newspapers using pseudonyms. He followed graduation with a residency in psychiatry at Yale University, where he studied psychoanalysis under Paul Federn.[1] He completed his training in 1938 and became an American citizen in 1939.[1] In 1943 he changed his legal name to Eric Berne.[1] He continued to use pseudonyms, such as Cyprian St. Clinical work[edit] After the war, Berne resumed his studies under Erik Erikson at the San Francisco Psychoanalytic Institute and practiced at Mt. Death[edit]

alfred wainwright Alfred Stieglitz Alfred Stieglitz (January 1, 1864 – July 13, 1946) was an American photographer and modern art promoter who was instrumental over his fifty-year career in making photography an accepted art form. In addition to his photography, Stieglitz is known for the New York art galleries that he ran in the early part of the 20th century, where he introduced many avant-garde European artists to the U.S. He was married to painter Georgia O'Keeffe. Life[edit] Early years (1864–1890)[edit] Stieglitz was born in Hoboken, New Jersey, the first son of German-Jewish immigrants Edward Stieglitz (1833–1909) and Hedwig Ann Werner (1845–1922).[1] At that time his father was a lieutenant in the Union Army, but after three years of fighting and earning an officer's salary he was able to buy an exemption from future fighting.[2] This allowed him to stay near home during his first son's childhood, and he played an active role in seeing that he was well-educated. 1886 Self-portrait.

Kris Harzinski . Auguste and Louis Lumière The Lumière (pronounced: [lymjɛːʁ]) brothers, Auguste Marie Louis Nicolas [oɡyst maʁi lwi nikɔla] (19 October 1862, Besançon, France – 10 April 1954, Lyon) and Louis Jean [lwi ʒɑ̃] (5 October 1864, Besançon, France – 6 June 1948, Bandol),[1][2] are credited to be first filmmakers in history. They patented the cinematograph, which contrary to Edison's "peepshow" kinetoscope, the former allowed viewing by multiple parties at once, like current cinema. Their first film, Sortie de l'usine Lumière de Lyon, shot in 1894, is considered the first real motion picture in history.[3] Curiously, their surname, "Lumière", is French for "light". History[edit] The LUMIèRE brothers were born in Besançon, France, in 1866 and 1867, and moved to Lyon in 1870, where both attended La Martiniere, the largest technical school in Lyon.[4] Their father, Claude-Antoine Lumière (1840–1911), ran a photographic firm and both brothers worked for him: Louis as a physicist and Auguste as a manager. See also[edit]

David Marr (neuroscientist) David Courtnay Marr (January 19, 1945 – November 17, 1980) was a British neuroscientist and psychologist. Marr integrated results from psychology, artificial intelligence, and neurophysiology into new models of visual processing. His work was very influential in Computational Neuroscience and led to a resurgence of interest in the discipline. Marr died of leukemia in Cambridge, Massachusetts, at the age of 35. His findings are collected in the book Vision: A computational investigation into the human representation and processing of visual information, which was published after his death and re-issued in 2010 by The MIT Press.[1] He was married to Lucia M. Marr is best known for his work on vision, but before he began work on that topic he published three seminal papers proposing computational theories of the cerebellum (in 1969), neocortex (in 1970), and hippocampus (in 1971). Marr treated vision as an information processing system. (1969) "A theory of cerebellar cortex." Vaina, L.