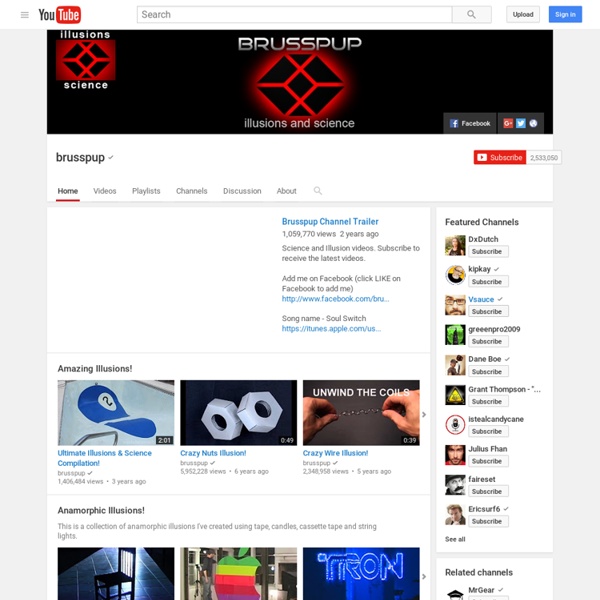 Mesmerising video created using kaleidoscopes & gymnasts Production studio abstract:groove and advertising agency DLV BBDO have created a mesmerising promotional film for sports clothing brand Freddy by using a clever combination of kaleidoscopes and gymnasts. No post-production was used to create the kaleidoscopic effects seen in the film. Instead, abstract:groove designed and built four thaumascopes varying in shape and size in order to capture the footage. Gymnasts from the Italian National Team of Rhythmic Gymnastic "le Farfalle" then performed within the thaumascopes for abstract:groove to capture on camera.

Each Line One Breath: Morphogenetic Freehand Drawings By John Franzen In his series of drawings titled Each Line One Breath, Netherlands-based artist John Franzen creates textured drawings remeniscent of wrinkled fabric or waves of water by drawing tediously placed rows of lines with black ink. The artist begins by drawing a single vertical line on the far side of a canvas but on subsequent lines allows for various imperfections to become amplified or suppressed as he continues, line after line. The process, which might look maddening, actually appears to be a sort of meditative effort for Franzen who works with almost robotic precision. Watch the two videos above to see how he works. If you liked this you might also enjoy the work of Tony Orrico.

Afternoon Animation: Kaleidoscope Ft. The Italian National Team Of Gymnastics The perfect way to space out on a Tuesday afternoon, KALEIDOSCOPE by Freddy brings viewers through an abstract paradise of runs, kicks, and jumps courtesy of the Italian National Team of Gymnastics. Created by DLV BBDO and production team abstract:groove, the collective, paired with Director Luigi Pane, experimented with the kaleidoscope effect for dramatic results. Working with 4 thaumascopes of different sizes and shapes, the biggest 9 meters long with a triangular opening of 2.5 meters, and the smallest 1.5 meters in length with a square opening of 60 centimeters, the team worked extensively to achieve the graphic patterns above. By studying small scale models and then going into CGI simulations, all the above effects were obtained in camera without the use of post-production. Just as interesting as the techniques used were the performers enlisted: The Italian National Team of Rhythmic Gymnastic 'le Farfalle', choreographed by their trainer Emanuela Maccarani.

TheQuirkles Check out all these awesome Quirkles characters that are full of easy science experiments for children. Watch this introduction to The Quirkles and discover why everyone is talking about these wonderful little scientists and their cool, simple, and fun science experiments for kids! The Quirkles® are 26 imaginary scientists that help children everyday, all over the world, develop a love and appreciation for science. They are an educational based series of books that offer an easy new way to integrate literacy and fun science at school or at home for kids. Each book is full of vocabulary builders, character education lessons, and two related easy science experiments for children that allow for hands on activities, helping to reinforce the topics that were just read. The series was created by teachers, and each story teaches/reinforces the phonetic sounds that serve as the building blocks for reading, while also making science—earth, physical, and life—fun and cool to learn.

Double Exposure Portraits by Sara K Byrne Portland-based photographer Sarah K. Byrne recently wrote and filmed a detailed tutorial on how to make multiple exposure photographs using a Cannon 5D Mark III camera and accompanied the article with some great examples of her own work. You can see more of her photography over on Tumblr, and if you liked this you can see many more examples of multiple exposure photography right here. (via fstoppers) The Top 25 Psychedelic Videos of All Time To see places 50-26 of the list please click here 2 years ago, when the idea was born to set up a website dedicated to curating one psychedelic video every day, we were still skeptical about how long one could continue, and afraid that after a month or two we’d run out of psychedelic videos to post. Today, in the second year anniversary of daily psychedelic video posts, with more than 700 psychedelic videos on the site, it seems clear that there are many more psychedelic videos out there than any of us would have dared to imagine. Psychedelic videos are not a thing of the past. In fact it is clear that more psychedelic videos are being produced these days than ever before by professional workers and independent artists alike, aided by ever improving computer technology and by the increased ability to share these videos on the web.

New Portraits by Kumi Yamashita Made with Nails, Thread, and Denim Two new portraits this morning from one of my favorite artists Kumi Yamashita (previously). The first one is part of her Constellation series titled Mana #2. The portrait is made from a single unbroken sewing thread wrapped through a dense network of galvanized nails, a process that takes several months. The second artwork, Mother #2, is part of her ongoing Warp and Weft series where Yamashita works with a panel of black denim and then meticulously cuts threads from the fabric to form an image. If you happen to be in California, both works will be in a group show from April 20th through June 1st, 2013 at Scott White Contemporary Art in La Jolla. You can also now follow the artist over on Facebook.

The Flexible Paper Sculptures of Li Hongbo What at first look like delicate works of carved porcelain are actually thousands of layers of soft white paper, carved into busts, skulls, and human forms by Beijing artist Li Hongbo. A book editor and designer, the artist became fascinated by traditional Chinese toys and festive decorations known as paper gourds made from glued layers of thin paper which can be stored flat but then opened to reveal a flower or other shape. He applied the same honeycomb-like paper structure to much larger human forms resulting in these highly flexible sculptures. Hongbo recently had a solo show at Dominik Mersch Gallery in Australia who made the videos above, and you can see much more of his work on their website.

35 Vladimir Kush Paintings That Will Awaken Your Artistic Soul When asked in an interview how he would describe his work to someone who had never seen it, Russian-born surrealist painter Vladimir Kush responded, “I would describe my work with the quote from William Blake:‘If the doors of perception were cleansed, everything would appear to man as it is, infinite…'” This response alone should give you some insight into Kush’s perspective — a perspective which drives him to create some of the most stunning and celebrated works of surrealism in recent history. Kush describes his work as Metaphorical Realism and has commented on the power of metaphor: “To reflect the world in the mirror of the metaphor — this is my goal. Metaphor does not only belong to linguistic communication but can also be found in our daily life.