France, 1500-1715. Lordship in France, 1500-1789 - James Lowth Goldsmith. Labour, Science and Technology in France, 1500-1620 - Henry Heller. Franco-Irish Relations, 1500-1610: Politics, Migration, and Trade - Mary Ann Lyons. French Wars of Religion. The exact number of wars and their respective dates are the subject of continued debate by historians; some assert that the Edict of Nantes in 1598 concluded the wars, although a resurgence of rebellious activity following this leads some to believe the Peace of Alais in 1629 is the actual conclusion. 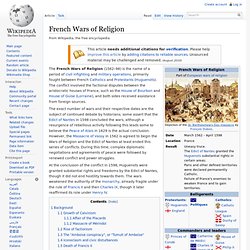 However, the Massacre of Vassy in 1562 is agreed to begin the Wars of Religion and the Edict of Nantes at least ended this series of conflicts. During this time, complex diplomatic negotiations and agreements of peace were followed by renewed conflict and power struggles. At the conclusion of the conflict in 1598, Huguenots were granted substantial rights and freedoms by the Edict of Nantes, though it did not end hostility towards them. The wars weakened the authority of the monarchy, already fragile under the rule of Francis II and then Charles IX, though it later reaffirmed its role under Henry IV. Background[edit] Growth of Calvinism[edit] Affair of the Placards[edit] 1562–70[edit] St. Bartholomew's Day massacre. The St. 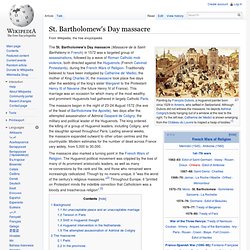 Bartholomew's Day massacre (Massacre de la Saint-Barthélemy in French) in 1572 was a targeted group of assassinations, followed by a wave of Roman Catholic mob violence, both directed against the Huguenots (French Calvinist Protestants), during the French Wars of Religion. Traditionally believed to have been instigated by Catherine de' Medici, the mother of King Charles IX, the massacre took place five days after the wedding of the king's sister Margaret to the Protestant Henry III of Navarre (the future Henry IV of France).

This marriage was an occasion for which many of the most wealthy and prominent Huguenots had gathered in largely Catholic Paris. The massacre began in the night of 23-24 August 1572 (the eve of the feast of Bartholomew the Apostle), two days after the attempted assassination of Admiral Gaspard de Coligny, the military and political leader of the Huguenots. The massacre also marked a turning point in the French Wars of Religion. Background[edit] Paris[edit] Huguenot. The Huguenots (/ˈhjuːɡənɒt/ or /huːɡəˈnoʊ/; French: [yɡno], [yɡəno]) were members of the Protestant Reformed Church of France during the 16th and 17th centuries. 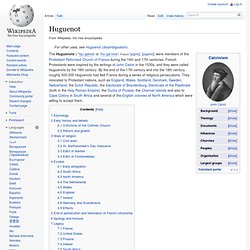 French Protestants were inspired by the writings of John Calvin in the 1530s, and they were called Huguenots by the 16th century. By the end of the 17th century and into the 18th century, roughly 500,000 Huguenots had fled France during a series of religious persecutions. They relocated to Protestant nations, such as England, Wales, Scotland, Denmark, Sweden, Switzerland, the Dutch Republic, the Electorate of Brandenburg, Electorate of the Palatinate (both in the Holy Roman Empire), the Duchy of Prussia, the Channel Islands and also to Cape Colony in South Africa and several of the English colonies of North America which were willing to accept them.

Etymology[edit] A term used originally in derision, Huguenot has indefinite origins. A version of this complex hypothesis is promoted by O.I.A. Early history and beliefs[edit] St.