Nationalism in France during WWI 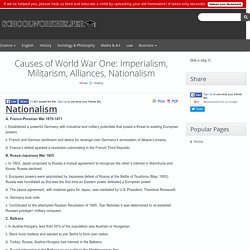 Franco-Prussian War 1870-1871 i. Established a powerful Germany with industrial and military potentials that posed a threat to existing European powers. International Encyclopedia of the First World War (WW1) Introduction↑ The history of nationalism in the pre-1914 period has often been refracted through the outcome of the First World War: 1918 is the point of departure, and preceding events and developments are selected and laid out in order to explain our arrival at this final station. 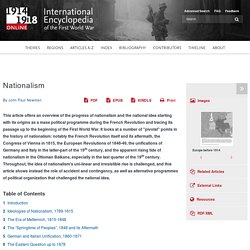 The historiographies of the new nation-states of eastern and central Europe, and especially the war’s “victor states” of Poland, Romania, Czechoslovakia, and Yugoslavia, are very often representative of such national teleologies. The Origins of WWI. Aehrenthal worked out a secret deal with Russian foreign minister Alexander Izvolsky. 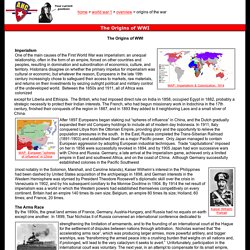 In exchange for Russian support for the Austrian annexation of Bosnia and Herzegovina, Austria would support Russia’s acquisition of the sole right to move warships through the Straits of Constantinople. The Russians were humiliated, however, when Aehrenthal announced the annexation before Izvolsky had secured his position with the other Great Powers, causing his part of the deal to fall through. Serbia seethed with resentment over the annexation and demanded the Russians do something about it. Izvolsky wanted to take Russia to war with Austria over this issue, but backed down when Germany threatened to reveal his role in the secret deal. The Russians were not prepared to have it known that they had secretly betrayed their Serb allies. And despite these efforts by von Aehrenthal, who was promoted to Count after this political "success", Serbian continued to expand.

Immediate Causes of WWI. Nationalism One of the main causes of World War I (otherwise known as the Great War) was the growing force of nationalism. 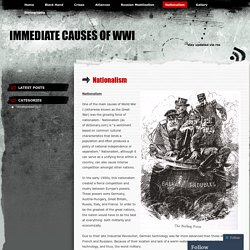 Nationalism (as of dictionary.com) is “a sentiment based on common cultural characteristics that binds a population and often produces a policy of national independence or separatism.” Nationalism, although it can serve as a unifying force within a country, can also cause intense competition amongst other nations. In the early 1900s, this nationalism created a fierce competition and rivalry between Europe’s powers. These powers were Germany, Austria-Hungary, Great Britain, Russia, Italy, and France. Due to their late Industrial Revolution, German technology was far more advanced than those of the British, French and Russians. Competition for natural ores and resources was one of the causes for the hatred amongst these nations.

Nations needed in order to run factories and other industries, being rich in natural resources- such as rubber, gold and diamonds. French World War One Propaganda Posters by isabella georgopoulos on Prezi. En Guerre: French Illustrators and World War I. The exhibition is on view in the Special Collections Research Center Gallery from October 14, 2014 - January 2, 2015. 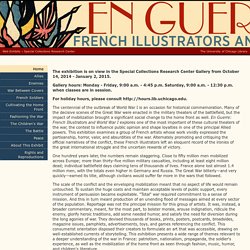 Gallery hours: Monday - Friday, 9:00 a.m. - 4:45 p.m. Saturday, 9:00 a.m. - 12:30 p.m. when classes are in session. For holiday hours, please consult. Propaganda for patriotism and nationalism. Professor David Welch explores nations’ reliance on propaganda in World War One, with a focus on symbols and slogans of nationhood and patriotism. 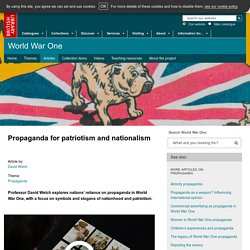 Professor Jo Fox provides fascinating insights into propaganda techniques of World War One. The First World War was the first war in which the mass media played a significant part in disseminating news from the Fighting Front to the Home Front. It was also the first war to target systematically produced government propaganda at the general public. All the belligerents were therefore compelled to recognise that they had to justify the righteousness of the war and, to this end, themes such as patriotism and nationalism played an important role. ‘Your Country Needs YOU’ The armies of continental Europe were made up of conscripts, who really had little choice about going to war. Symbols of nationhood One tactic at a state’s disposal was the use of iconic figures to strengthen a particular point about national identity in order to promote patriotism. Nationhood and Nationalism in France: From Boulangism to the Great War 1889-1918 - Google Books.

The role of nationalism in the Two World Wars.