French Islamism and the Future of Europe. A briefing by Guy Millière July 11, 2016 Summary account by Middle East Forum intern Joshua Buri In a May 24 talk in Philadelphia hosted by the Middle East Forum, noted professor and anti-Islamist author Guy Millière warned that Islamism has spread throughout Europe and argued that this process will likely continue unabated. 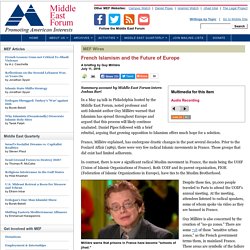 Daniel Pipes followed with a brief rebuttal, arguing that growing opposition to Islamism offers much hope for a solution. France, Millière explained, has undergone drastic changes in the past several decades. Prior to the Foulard Affair (1989), there were very few radical Islamic movements in France. In contrast, there is now a significant radical Muslim movement in France, the main being the UOIF (Union of Islamic Organizations of France). Despite these ties, 50,000 people traveled to Paris to attend the UOIF's annual meeting.

Islamization and Demographic Denialism in France. Excerpt of an article originally published under the title "Latest Survey Finds 25% of French Teenagers Are Muslims. 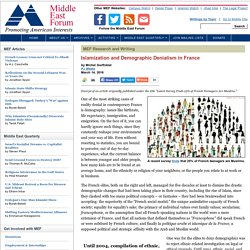 " One of the most striking cases of reality denial in contemporary France is demography: issues like birthrate, life expectancy, immigration, and emigration. On the face of it, you can hardly ignore such things, since they constantly reshape your environment and your way of life. Even without resorting to statistics, you are bound to perceive, out of day-to-day experience, what the current balance is between younger and older people, how many kids are to be found at an average home, and the ethnicity or religion of your neighbors, or the people you relate to at work or in business. One way for the elites to deny demographics was to reject ethnic-related investigation on legal or ethical grounds. Until 2004, ethnic, racial, and religious statistics were not allowed under French law – ostensibly to prevent a return of Vichy State-style racial persecutions.

France faces 14 BILLION-EURO black hole after it overestimates tax income in the last year. Francois Hollande has increased tax since he was elected two years agoBut profit from taxes were little more than half the 30bn-euro forecastCourt of Auditors said forecasts were wildly inaccurate and optimistic Follows criticism that the socialist leader's policies are halting the recoveryUnemployment also rose by 14,800 in April, a record under Hollande. 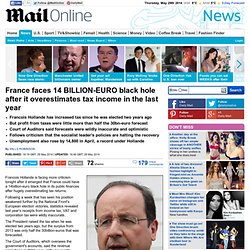 Le catastrophe! A hated leader. Violent protests. Wealth creators Fleeing abroad. After a year of socialism, France's meltdown is a stark warning to anyone who wants Red Ed as PM. By Daniel Hannan PUBLISHED: 23:21 GMT, 23 April 2013 | UPDATED: 09:29 GMT, 24 April 2013 Never in modern times has a French government been so unpopular. 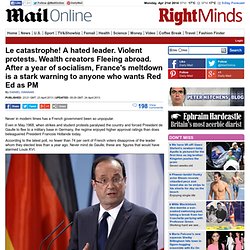 Even in May 1968, when strikes and student protests paralysed the country and forced President de Gaulle to flee to a military base in Germany, the regime enjoyed higher approval ratings than does beleaguered President Francois Hollande today. According to the latest poll, no fewer than 74 per cent of French voters disapprove of the leader whom they elected less than a year ago. Never mind de Gaulle; these are figures that would have alarmed Louis XVI. Mr Hollande inherited an over-taxed, over-regulated, sclerotic France, and systematically set out to make all its problems worse Now, as during the run-up to the French Revolution, angry observers contrast a dramatically declining economy with the wealth of some high officials. Sleaze How did it all go so wrong so quickly?

Hollande is most unpopular French president since Charles de Gaulle at height of 1968 riots. Approval rating plummets to 25% amid unemployment and public debt. 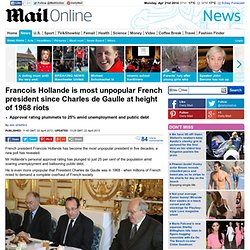 So much to do, so little time. France and the euro: The time-bomb at the heart of Europe. Why should anyone listen to a country whose imploding economy could drag the whole of Europe down with it? Profile: Jean-Francois Cope, leader of France's UMP. 20 November 2012Last updated at 07:21 ET Jean-Francois Cope is seen here at a political rally in Paris Jean-Francois Cope (pronounced "cope-ay"), the man who snatched victory in the leadership contest for France's conservative UMP party, has been a strong ally of Nicolas Sarkozy. 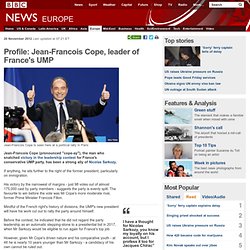 If anything, he sits further to the right of the former president, particularly on immigration. His victory by the narrowest of margins - just 98 votes out of almost 175,000 cast by party members - suggests the party is evenly split. The favourite to win before the vote was Mr Cope's more moderate rival, former Prime Minister Francois Fillon. Continue reading the main story. Exclusive: Worried Germany seeks study on French economy - sources.

Hollande likely to shrug off "shock therapy" review. Hollande unveils tough new budget saving 30 billion euros from public expenditure. Gangs fire at police as riots erupt in France: Cars and buildings wrecked in orgy of violence. At least 16 officers were seriously injured during the disturbances on council estates in the city of Amiens, in the Somme regionIt was first serious urban rioting to break out in France since a new Socialist government was elected earlier this year By Peter Allen Published: 10:43 GMT, 14 August 2012 | Updated: 01:02 GMT, 15 August 2012 Police were shot at and buildings destroyed as rioting broke out in two major French cities, presenting the first big test of newly-elected president Francois Hollande’s leadership. 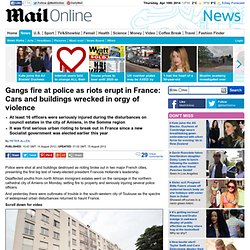 Disaffected youths from north African immigrant estates went on the rampage in the northern cathedral city of Amiens on Monday, setting fire to property and seriously injuring several police officers. France could quit EU open borders deal because of illegal immigration, warns Sarkozy. By Steve Doughty Published: 02:24 GMT, 12 March 2012 | Updated: 10:28 GMT, 12 March 2012 Threat: Nicolas Sarkozy has warned he could wreck the European free travel zone due to illegal immigration in a speech to a Paris rally French president Nicolas Sarkozy yesterday threatened to wreck the European free travel zone unless there is a new pact to cut down on illegal immigration. 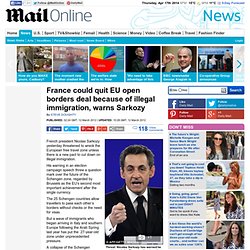 His warning in an election campaign speech threw a question mark over the future of the Schengen zone, regarded by Brussels as the EU’s second most important achievement after the single currency. The 25 Schengen countries allow travellers to pass each other’s borders without checks or the need for visas. Will the Emperor of Excess bankrupt France? Sarkozy has a £300m jet (with its own baguette oven). Corruption is rampant. And the majority of the French are on the state payroll. His Airbus A330 has a specially-raised presidential chair enabling the 5ft 5ins President to look down on his officials from on high'Throughout his presidency, he — and his Government — have been involved in staggering levels of profligacy' By Andrew Malone Updated: 07:41 GMT, 27 October 2011 Luxury: French President Nicolas Sarkozy and his wife Carla Bruni-Sarkozy wave as they arrive at the Elysee Palace, who both enjoy 'billionaire bling' 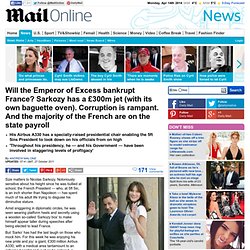