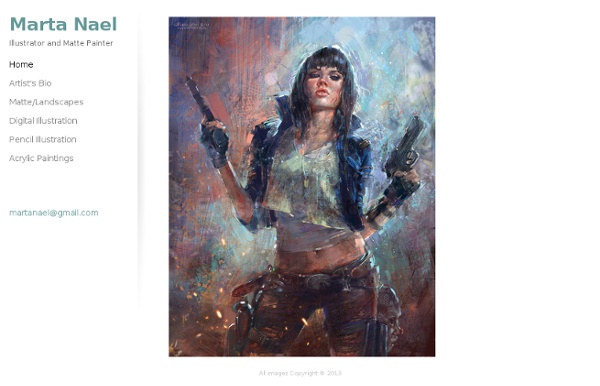 Robh Ruppel College Boss Films thrived and Robh also freelanced in Los Angeles, working on the movie 'Misery' with Rob Reiner and Norman Garwood. He also went back to the Art Center College, where he crossed over and did some teaching on their invitation. "They wanted an additional teacher for the landscape class and I taught that for several terms and then I said, 'Hey why don't we start doing this on laptops, because most of these students are going to be working digital anyway', and from then on we went out into the field and painted on our laptops, from life." Ruppel had turned his class into a digital landscape painting session. Robh also found figure drawing education at the California Art Institute, run by Fred Fixler. This is where he met Morgan Weistling, Greg Pro and Glen Orbik and others.

Stéphanie Rousseau Ce site utilise des cookies pour améliorer votre expérience de navigation.OK ! En Savoir plus All Art Direction Graphic Design illustration Photographie Redactionnel WebDesign So Basic So Chic Hasan Bajramovic - Interview - Hello Hasan, could you tell us a bit about yourself and your background in CG and are you self-taught or have taken some training? First of all Hi to all fellow artists out there and a big thank you to CGArena for this interview. I was born in Bosnia and Herzegovina where I currently reside. I specialize in character modeling, sculpting and Texturing for games and film. I got my degree in Arts and Creative Multimedia in Malaysia in 2007.

Björn Hurri - Art by - Done for the Superfriends Challenge season 2 . This time the theme was : Ice Cold Terror See the article about season 2 here 2dgeek This image also have the process saved on youtube if you are interested! Marcus Dublin Paragalis / Retopology / Optimizing the model: The Final Results: At this point I go over the mesh one more time, tweaking it here and there making any and all necessary adjustments. You can see from the images below how the low poly mesh matches up with the mid level poly mesh. Once I’m done with my tweaks I'll weld all of the vertices and move onto the next step, which would be the UV’s. Step Ten: Creating the UV's

Pierre-Olivier Levesque - Badass Zbrush Sculpting Collection Watch some amazing Stuff done by Pierre-Olivier Levesque in Zbrush. Below is some various he has worked on in 2014 at Gameloft and some personal stuff. All Done in zbrush and render in vray and keyshot (the lastest). For the solider He used: zbrush / maya / marvelous designer / xnormal / mari / quixel / marmoset This one is based on the concept of Karl Kopinski: Makingof Maschinen Project In Zbrush Check this awesome makingof Maschinen With use of Zbrush and photoshop.Artist create a cinematic character inspired by major studios such as Blur, Blizzard and others. Artist profile- 911 Total Views 74 Views Today Gurjeet Singh on Building Great Lowpoly Characters Gurjeet Singh is a 3D artist who specializes in high and low resolution modeling. He’s been working on games, CGI-movies, and even helped to build some of the exciting sculptures for the fans of The Elder Scrolls: Skyrim. Professionally, Gurjeet has contributed to a number of cool games like Dead Rising 3, Batman: Arkham Origins, Firefall, WildStar and worked on collectibles for Mass Effect and Skyrim. A Little Introduction The Elder Scrolls V: Skyrim – Shrine of Talos My name is Gurjeet Singh, I have been working in this industry for more than 5 years now.