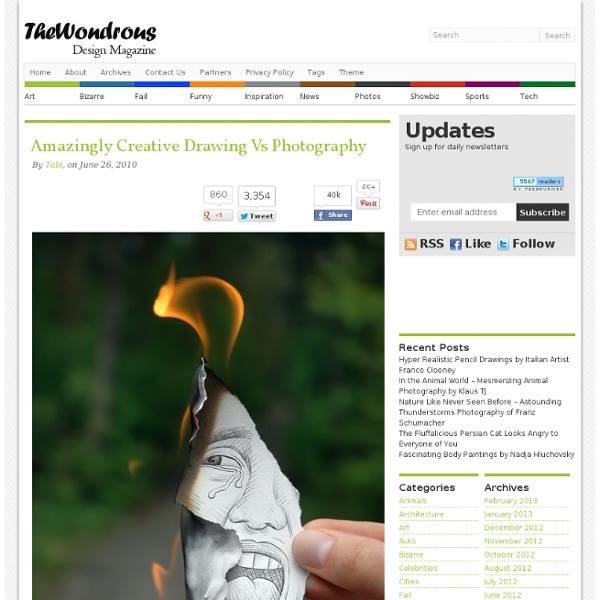 This wonderful work has done by a very talented Belgian painter, illustrator, portraitist, caricaturist and photographer Ben Heine. This creative artist was born in Abidjan, Ivory Coast. He Studied graphic arts and sculpture and I also have a degree in journalism. Lets take a look at some of his awesome works that he calls “Drawing Vs Photography” or “Imagination Vs Reality”.

The First Zombie-Proof House Somehow, ritual drunk-conversation concerning team captains for the apocalypse has become a major part of the lives of 20-somethings. Having been matured in the Grandaddy-crowned masterpiece film (put “A.M. 180” on and forget that you have a job) 28 Days Later and the best-selling Zombie Survival Guide, we’re all a little too ready to deal with the 2012 zombie apocalypse of our dreams. “The Safe House,” designed by KWK Promes, starts to get eerily close to something I could work with, if say 200 bludgeoned members of the undead army came over to eat their way into borrowing some sugar. “The most essential item for our clients was acquiring the feeling of maximum security,” begins the designers’ website in the summary of the structure. Who wouldn’t feel safe in a concrete rectangle that folds in upon itself to become completely sealed?

Miniature racetrack sculpture, inspired by cult film Metropolis, takes artist 4 years to make By Louise Boyle Updated: 14:04 GMT, 10 January 2012 The 1927 science-fiction film Metropolis is an expressionistic portrayal of a dystopian, capitalist society which has become a cult classic among movie lovers. Artist Chris Burden used the film by German director Fritz Lang as the inspiration for his racetrack sculpture and spent four years building Metropolis II. The model city features 1,100 toy cars zipping around a track through miniature skyscrapers, at speeds of up to 230mph. Where Science, Art and Photography Intersect (25 photos) Silhouette with Matches Caleb Charland demonstrates lessons in physics and mathematics with his mind-blowing photography. Inspired by children's books of science experiments, he photographs everyday objects (like matches, pens and mirrors) in ways we've never imagined, often using multiple exposures to tell the story. For example, in Fifteen Hours, the last photo in this set, Charland used 15 exposures to show how the flame of a dinner candle beautifully burns down. In still others, like in Cube with Rule and Penlight, Caleb Charland sits in pitch black darkness and, with a penlight in his hand, traces the shape of a cube along a ruler.

BACK TO THE FUTURE : Irina Werning - Photographer I love old photos. I admit being a nosey photographer. As soon as I step into someone else’s house, I start sniffing for them. Most of us are fascinated by their retro look but to me, it’s imagining how people would feel and look like if they were to reenact them today… Two years ago, I decided to actually do this. Photographer Captures An Underwater Dance Of Colors The shapes displayed in Luka Klikovac’s work look like colored smoke, or maybe strange deep-sea creatures, but they’re actually mixtures of colored and black liquids immersed in water. The Serbian photographer’s photo series is called Demersal and was based on the unique motions resulting from the combination of fluids. To create this psychedelic effect, the photographer used nothing but his camera and lights capable of showing the dance of fluid shapes captured by his lenses. No digital editing resources were used afterwards, so what you see in the images are actually the precise moments when the two elements were combined.

Crystal River - The most beautiful river on earth [Pics] Cano Cristales - Crystal River. River of five colors, as the locals call it, originates in the south of the mountain chain Macarena, Colombia, and flows eastward to its confluence with the Guayabero river. In the Cano Cristales found five colors: yellow, blue, green, black and red. 20 awesome examples of street art If you still need a proof that art can be found anywhere, those awesome examples of great street art should convince you.

Paper Flowers – Anyone Can Do That Japanese Kusudama, this tutorial is featured on Craftuts Anyone can do that, I assure you. The proof: I can, just take a quick look at my result below. And, believe me, I am neither meticulous nor particularly patient. You could even say I’m the opposite. Below you can see my very first attempt to create paper flowers. sidewalk chalk guy sidewalk chalk guy «« back to gprime.net all material copyrighted by its original creator |

Dream Worlds Revealed On Canvas - StumbleUpon Along with some magnificent dreams, Jacek Yerka finds inspiration for his masterful paintings from his childhood memories: the places, remembered feelings and smells of 1950′s Poland. He studied fine art and graphic design before becoming a full time artist in 1980… and we’re glad he did. His paintings will take you through incredible worlds of imagination, bending reality in captivating and clever ways fit to inspire a novel or film. See many more examples of his find paintings at yerkaland.com. See Also ENDEARING MONSTER DRAWINGS POP FROM THE SCREEN Via: hypeness.com.br