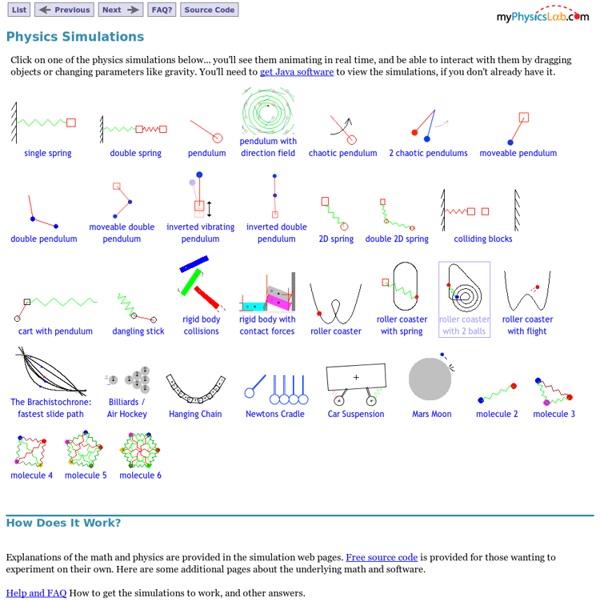 Click on one of the physics simulations below... you'll see them animating in real time, and be able to interact with them by dragging objects or changing parameters like gravity. Get Java software if you don't already have it. The next set of simulations are non-interactive movies. How Does It Work? Explanations of the math and physics are provided in the simulation web pages. Free source code is provided for those wanting to experiment on their own.

Physics and Astronomy, School of Physics and Astronomy, School of Key measures: Positive Outcomes: 95%, Graduate prospects: 81.7%, Graduate employment: 79.3% "The Elements". A Flash animation The Periodic Table The periodic table of the chemical elements (also periodic table of the elements or just the periodic table) is a tabular display of the chemical elements. Although precursors to this table exist, its invention is generally credited to Russian chemist Dmitri Mendeleev in 1869, who intended the table to illustrate recurring ("periodic") trends in the properties of the elements. The layout of the table has been refined and extended over time, as new elements have been discovered, and new theoretical models have been developed to explain chemical behavior.

Physics Flash Animations We have been increasingly using Flash animations for illustrating Physics content. This page provides access to those animations which may be of general interest. The animations will appear in a separate window. Physics To Go: Explore Physics on your own image credit: U.S. Air Force; image source; larger image Newton's 3rd Law What is the purpose of the small rotor on the back of this helicopter? Secret Worlds: The Universe Within - Interactive Java Tutorial Secret Worlds: The Universe Within View the Milky Way at 10 million light years from the Earth. Then move through space towards the Earth in successive orders of magnitude until you reach a tall oak tree just outside the buildings of the National High Magnetic Field Laboratory in Tallahassee, Florida. 11 Com b - Visual Exoplanet Catalogue The planetary system 11 Com hosts at least one planet. Image Click on the image to get a higher resolution image. Architecture of the system This list shows all planetary and stellar components in the system. It gives a quick overview of the hierarchical architecture. 11 Com is not binary system, so the architecture is rather simple.

Physics Flash Animations We have been increasingly using Flash animations for illustrating Physics content. This page provides access to those animations which may be of general interest. The animations will appear in a separate window. The animations are sorted by category, and the file size of each animation is included in the listing. Also included is the minimum version of the Flash player that is required; the player is available free from The categories are: In addition, I have prepared a small tutorial in using Flash to do Physics animations. Transit Agencies We’ve been following the trend of transit agencies providing developer access to timetables, routes and more for some time. Big cities, like New York and Boston are on board and helping fuel new transit applications. There now seems to be more momentum, with organizations and influencers making the call for open data.

MindShift MindShift explores the future of learning in all its dimensions. We examine how learning is being impacted by technology, discoveries about how the brain works, poverty and inequities, social and emotional practices, assessments, digital games, design thinking and music, among many other topics. We look at how learning is evolving in the classroom and beyond.We also revisit old ideas that have come full circle in the era of the over scheduled child, such as unschooling, tinkering, playing in the woods, mindfulness, inquiry-based learning and student motivation. We report on shifts in how educators practice their craft as they apply innovative ideas to help students learn, while meeting the rigorous demands of their standards and curriculum. MindShift has a unique audience of educators, tinkerers, policy makers and life-long learners who engage in meaningful dialogue with one another on our sites.