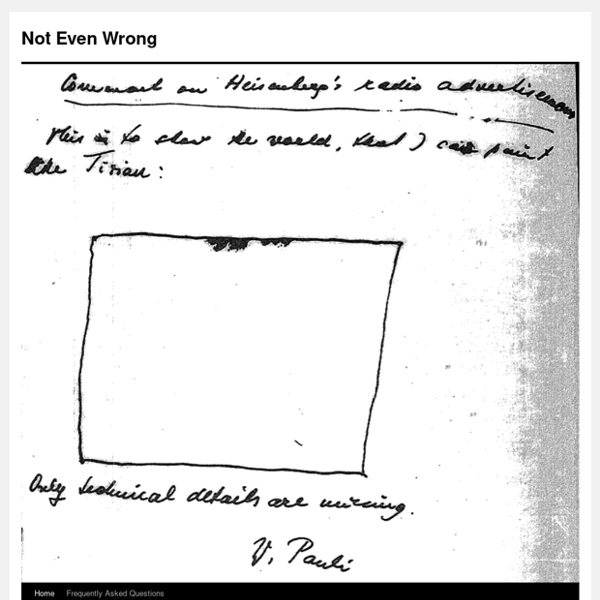 Graham Farmelo has posted a very interesting interview he did with Witten last year, as part of his promotion of his forthcoming book The Universe Speaks in Numbers. One surprising thing I learned from the interview is that Witten learned Calculus when he was 11 (this would have been 1962). He quite liked that, but then lost interest in math for many years, since no one gave him more advanced material to study. After years of studying non math/physics subjects and doing things like working on the 1972 McGovern campaign, he finally realized physics and math were where his talents lay. He ended up doing a Ph.D. at Princeton with David Gross, starting work with him just months after the huge breakthrough of asymptotic freedom, which put in place the final main piece of the Standard Model. If only back in 1962 someone had told Witten about linear algebra and quantum mechanics, the entire history of the subject could have been quite different. About the landscape:

The spherical genius of the Hüttlin Kugelmotor Huttlin kugel motor prototype under testing Image Gallery (25 images) The car is not going to disappear anytime soon and neither is the combustion engine, despite the inevitable rise in fuel prices. We have said it before, electrical motors are an energy-efficient method for driving vehicles but battery technology is simply not going to advance quickly enough for all-electric vehicles to be a practical reality for most uses anytime soon. Technicolor (physics) Technicolor theories are models of physics beyond the standard model that address electroweak gauge symmetry breaking, the mechanism through which W and Z bosons acquire masses. Early technicolor theories were modelled on quantum chromodynamics (QCD), the "color" theory of the strong nuclear force, which inspired their name. In order to produce quark and lepton masses, technicolor has to be "extended" by additional gauge interactions.

ZEITGEIST THE MOVIE REMASTERED : Peter Joseph <div style="padding:5px; font-size:80%; width:300px; background-color:white; margin-left:auto; margin-right:auto; border:1px dashed gray;"> Internet Archive's<!--'--> in-browser video player requires JavaScript to be enabled. It appears your browser does not have it turned on. Pontryagin duality In mathematics, specifically in harmonic analysis and the theory of topological groups, Pontryagin duality explains the general properties of the Fourier transform on locally compact groups, such as R, the circle, or finite cyclic groups. The Pontryagin duality theorem itself states that locally compact groups identify naturally with their bidual. The subject is named after Lev Semenovich Pontryagin who laid down the foundations for the theory of locally compact abelian groups and their duality during his early mathematical works in 1934.

Cabibbo–Kobayashi–Maskawa matrix The matrix[edit] A pictorial representation of the six quarks' decay modes, with mass increasing from left to right. In 1963, Nicola Cabibbo introduced the Cabibbo angle (θc) to preserve the universality of the weak interaction.[1] Cabibbo was inspired by previous work by Murray Gell-Mann and Maurice Lévy,[2] on the effectively rotated nonstrange and strange vector and axial weak currents, which he references.[3] Fredkin finite nature hypothesis In digital physics, the Fredkin Finite Nature Hypothesis states that ultimately all quantities of physics, including space and time, are discrete and finite. All measurable physical quantities arise from some Planck scale substrate for multiverse information processing. Also, the amount of information in any small volume of spacetime will be finite and equal to a small number of possibilities.[1] Conceptions[edit] Stephen Wolfram in A New Kind of Science, Chapter 9, considered the possibility that energy and spacetime might be secondary derivations from an informational substrate underlying the Planck scale.

Scharnhorst effect The Scharnhorst effect is a hypothetical phenomenon in which light signals travel faster than c between two closely spaced conducting plates. It was predicted by Klaus Scharnhorst of the Humboldt University of Berlin, Germany, and Gabriel Barton of the University of Sussex in Brighton, England. They showed using quantum electrodynamics that the effective refractive index, at low frequencies, in the space between the plates was less than 1 (which by itself does not imply superluminal signaling).

Ligne du temps: 800BC-700AD Indian mathematicians are marked in red Other non-Greek mathematicians are marked in blue For the purposes of this diagram, if birth or death dates are not known, we have assigned a life span of 60 years. Scroll the window to see the whole diagram Digital physics Digital physics is grounded in one or more of the following hypotheses; listed in order of decreasing strength. The universe, or reality: History[edit] The hypothesis that the universe is a digital computer was pioneered by Konrad Zuse in his book Rechnender Raum (translated into English as Calculating Space). The term digital physics was first employed by Edward Fredkin, who later came to prefer the term digital philosophy.[3] Others who have modeled the universe as a giant computer include Stephen Wolfram,[4] Juergen Schmidhuber,[5] and Nobel laureate Gerard 't Hooft.[6] These authors hold that the apparently probabilistic nature of quantum physics is not necessarily incompatible with the notion of computability.

Non-orientable wormhole In topology, this sort of connection is referred to as an Alice handle. Theory[edit] "Normal" wormhole connection[edit] Matt Visser has described a way of visualising wormhole geometry: The Awakening - Mécanique quantique du cerveau humain et la conscience «Times End Game Before reading this interesting and potentially life changing blog, it would be a good idea to watch the following short videos at the links provided below; and read the article, third link below, as a prerequisite if one does not understand the double slit experiment or basic quantum physics. Dr. Granville Dharmawardena of the University of Colombo writes that psychologists often speak of the mind and the body as two separate entities for convenience, but most acknowledge that they are intimately entwined. Yet none knows exactly how or how intimately. So the mind body problem keeps stubbornly resisting a definite solution. Philosopher John Searle (Mills Professor of Philosophy, University of California, and Berkley) says that today’s philosophers are reluctant to tackle such big problems as how people have been trying to understand their relationship to the universe.

Lorentz group The mathematical form of Basic properties[edit] The Lorentz group is a subgroup of the Poincaré group, the group of all isometries of Minkowski spacetime. The Lorentz transformations are precisely the isometries which leave the origin fixed. Homogeneity (physics) The definition of homogeneous strongly depends on the context used. For example, a composite material is made up of different individual materials, known as "constituents" of the material, but may be defined as a homogeneous material when assigned a function. For example, asphalt paves our roads, but is a composite material consisting of asphalt binder and mineral aggregate, and then laid down in layers and compacted. In another context, a material is not homogeneous in so far as it composed of atoms and molecules.