7 Man-Made Substances that Laugh in the Face of Physics 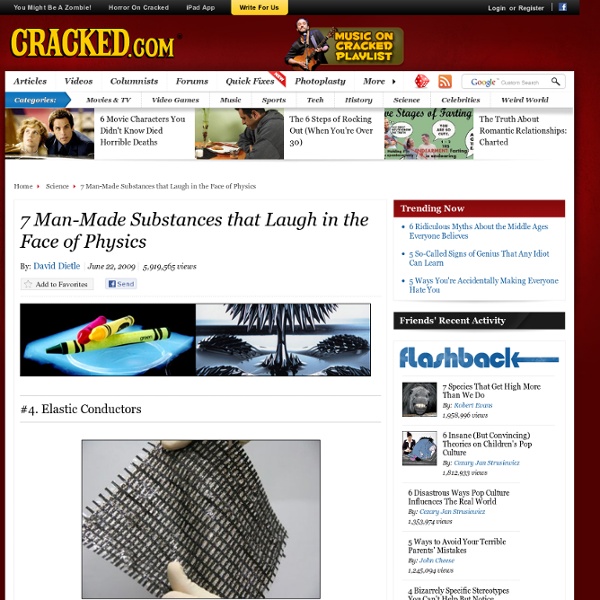 Odds are pretty good that some of you are reading this on an LCD screen while the rest of us are trying to make it out on the 13-inch monochrome monitor that came with our garage sale Commodore 64. But even with the LCD, some laptops still weigh over 10-pounds. And while that doesn't seem like much, the level of muscle atrophy experienced by the average Warcraft addict makes that weight a thousand times heavier. However, elastic conductors could fix that and make smuggling your porn collection into church even easier. Also, oooohhh. Elastic conductors are made of "ionic liquid" mixed with carbon nanotubes. What the Hell is it Used For? In addition to making screens that can be rolled up and stuck in our back pocket, a lot of scientists and doctors want to use elastic conductors to make flexible-lensed cameras... to be fitted to the back of the eyeball. A non-Newtonian liquid, in practical terms, is a liquid that turns solid when sufficient stress is applied. Also, something with lasers.

The Ultimate Field Guide to Subatomic Particles This is, for the most part, an accurate article, except for a few statements. "Exactly what makes a fermion a fermion is a bit complicated, but suffice it to say that fermions are all the particles that deal with matter. So what about the last group of elementary particles, the ones that don't deal with matter? These are the bosons, and they deal with the fundamental forces of the universe." How to See the Stars on the Longest Winter Nights We are now only a few weeks away from the winter solstice Dec. 22. Anyone who lives in northern latitudes might have noticed how late the sun is rising and how early the sun is setting lately, especially since the end of Daylight Saving Time earlier this month. Most people think of the winter solstice as the shortest day of the year, but stargazers tend to see it as the longest night of the year.

Crystal 'Flowers' Bloom in Harvard Nanotech Lab Imagine peering into a microscope and finding yourself in a garden. That's the case at Harvard School of Engineering and Applied Sciences, where researchers have found a way to shape microscopic crystals into complex and often beautiful structures. Inspired by coral reefs, seashells and other naturally occurring complex mineral structures, postdoctoral fellow Wim L. Noorduin and Harvard colleagues have been researching ways to manually recreate similar designs.

110 Year Old Light Bulb Baffles Scientists & zowienews An incandescent light bulb recognized by Guinness World Records as being the longest burning is still glowing strong days after celebrations that marked its 110th anniversary. The Centennial Light Bulb, at Fire Station No. 6 in Livermore, Calif., has been burning bright since it was first installed in 1901. (The exact date appears unknown, though the bulb’s “birthday” is typically held in June, most recently June 18th.) Since then, the 60-watt bulb has been alight 24 hours a day, operating at about 4 watts, to provide night illumination of the fire engines. Other than a few power outages, there has only been one break in its operation, when it was removed from one fire station and fitted in another in 1976. The cord was severed out of fear that unscrewing the bulb would break it, and it was moved with a full police and fire truck escort, under the watch of Capt.

Physics Flash Animations We have been increasingly using Flash animations for illustrating Physics content. This page provides access to those animations which may be of general interest. The animations will appear in a separate window. All for the Boys - All for the Boys - MOVE OVER PAPER&AIRPLANES because the straw plane is in town! I don't know what you call this thing but we referred to it as a strawplane. Whatever you want to call it, it's pretty cool! You'll need some heavier paper (we used 3x5 index cards), a straw, scissors or something to cut the paper with, and tape. You will need to cut 3 pieces of paper about 1" wide and 5" long. Tape two of the pieces together "long ways" and then tape to form a circle. Nanostructured nanowires appears to solve loss of superconductivity in very strong magnetic fields Researchers have discovered a way to efficiently stabilize tiny magnetic vortices that interfere with superconductivity—a problem that has plagued scientists trying to engineer real-world applications for decades. The discovery could remove one of the most significant roadblocks to advances in superconductor technology. When magnetic fields reach a certain strength, they cause a superconductor to lose its superconductivity. But there is a type of superconductor—known as “Type II”—which is better at surviving in relatively high magnetic fields.

Mycologist's So-Called Life Box - Environment The resourceful mycologist (that's a fungi-studier) Paul Stamets has made cardboard packaging that can be planted and will grow into trees. It's called the Life Box. The Life Box suite of products builds upon the synergy of fungi and plants by infusing spores and seeds together inside of packaging materials that can be planted. Crystal Egg Geodes - Martha Stewart Easter - StumbleUpon Geodes can be grown without using egg dye. The resulting crystals are clear to milky white, like quartz. While large chicken eggshells are suggested in this process, larger eggshells can be used. Simply increase the size of the plastic or glass container and double or triple the amounts of dye (1 packet), alum (3/4 part), and water (2 parts) used to create the growing solution. This Easter craft from Jim "Figgy" Noonan doubles as a science project, offering an opportunity to show kids the crystallization process at work. To make a fluorescent variation for Halloween, substitute the water and egg dye solution with glow water.

Just add water: How scientists are using silicon to produce hydrogen on demand Related images(click to enlarge) Swihart Research Group, University at Buffalo Super-small particles of silicon react with water to produce hydrogen almost instantaneously, according to University at Buffalo researchers. In a series of experiments, the scientists created spherical silicon particles about 10 nanometers in diameter. When combined with water, these particles reacted to form silicic acid (a nontoxic byproduct) and hydrogen -- a potential source of energy for fuel cells.

Scientists twist light to send data: Beams of light can be twisted and combined to transmit data dramatically faster A multi-national team led by USC with researchers hailing from the U.S., China, Pakistan and Israel has developed a system of transmitting data using twisted beams of light at ultra-high speeds -- up to 2.56 terabits per second. To put that in perspective, broadband cable (which you probably used to download this) supports up to about 30 megabits per second. The twisted-light system transmits more than 85,000 times more data per second. Their work might be used to build high-speed satellite communication links, short free-space terrestrial links, or potentially be adapted for use in the fiber optic cables that are used by some Internet service providers. "You're able to do things with light that you can't do with electricity," said Alan Willner, electrical engineering professor at the USC Viterbi School of Engineering and the corresponding author of an article about the research that was published in Nature Photonics on June 24.

Top 10 Most Dangerous Plants in the World 1. Most likely to eat a rat Giant Pitcher Plant: Nepenthes attenboroughii