10 Strange Things About The Universe 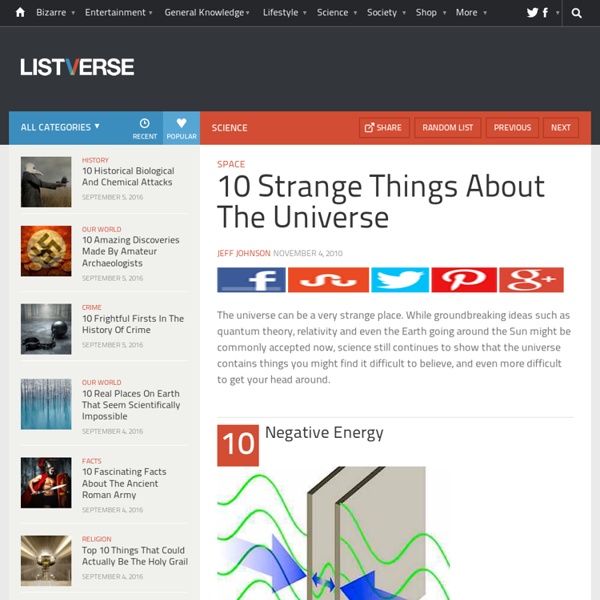 Space The universe can be a very strange place. While groundbreaking ideas such as quantum theory, relativity and even the Earth going around the Sun might be commonly accepted now, science still continues to show that the universe contains things you might find it difficult to believe, and even more difficult to get your head around. Theoretically, the lowest temperature that can be achieved is absolute zero, exactly ?273.15°C, where the motion of all particles stops completely. However, you can never actually cool something to this temperature because, in quantum mechanics, every particle has a minimum energy, called “zero-point energy,” which you cannot get below. One of the properties of a negative-energy vacuum is that light actually travels faster in it than it does in a normal vacuum, something that may one day allow people to travel faster than the speed of light in a kind of negative-energy vacuum bubble. Relativity of Simultaneity Antimatter Retrocausality

Space.com Buy This Infographic as a Full-Size Poster Astronomers have discovered more than 700 alien planets beyond the solar system, and the count is rising all the time. Some are large and hot, and others are smaller and cooler, but scientists are still on the lookout for an Earth twin. They just got closer, with the announcement Dec. 5 of a planet found by NASA's Kepler space telescope to lie in the habitable zone around its star where liquid water, and perhaps life, could exist. You can purchase a 20"x60" poster of this SPACE.com infographic on high-quality 14G Photo Paper from the SPACE.com store here: Buy Poster

Double-Slit Experiment The video below shows scientific proof that there is something NOT quite logical or scientific about this universe. The mere act of observation can completely change the outcome of an event! Before I get too ahead of myself, you need to watch the video below to understand: (Forgive the corny cartoon character explaining the concept — at least he knows his stuff) Recap: When a camera observed the electrons, they acted as particles. Networks of Genome Data Will Transform Medicine Breakthrough Technical standards that let DNA databases communicate. Why It Matters

LHC Detects Evidence of New Physics After nearly 6 months of smashing particles, the Large Hadron Collider has seen signs of something entirely new. Pairs of charged particles produced when two beams of protons collide seem to be associated with each other even after they fly apart. “It is a small effect, but it is very interesting in itself,” said physicist Guido Tonelli, spokesperson for the LHC’s CMS experiment. Special Relativity Special Relativity These pages are ok as far as they go, but they are missing the planned highlight, to show you what things actually look like when you travel at near the speed of light. I hope to have the opportunity to develop these pages further as time permits.

SIMBAD Astronomical Database What is SIMBAD, and what is it not ? % The purpose of Simbad is to provide information on astronomical objects of interest which have been studied in scientific articles. Simbad is a dynamic database, updated every working day. It provides the bibliography, as well as available basic information such as the nature of the object, its coordinates, magnitudes, proper motions and parallax, velocity/redshift, size, spectral or morphological type, and the multitude of names (identifiers) given in the literature.

Canada Missing Gravity For more than 40 years, scientists have tried to figure out what's causing large parts of Canada, particularly the Hudson Bay region, to be "missing" gravity. In other words, gravity in the Hudson Bay area and surrounding regions is lower than it is in other parts of the world, a phenomenon first identified in the 1960s when the Earth's global gravity fields were being charted. Two theories have been proposed to account for this anomaly. But before we go over them, it's important to first consider what creates gravity. At a basic level, gravity is proportional to mass. So when the mass of an area is somehow made smaller, gravity is made smaller.

We're More than Stardust — We're Made of the Big Bang Itself Transcript Anna Frebel: The work of stellar archaeology really goes to the heart of the "we are stardust" and "we are children of the stars" statement. You’ve probably heard it all but what does it actually mean? We are mostly made all humans and all life forms that we know of are made mostly of carbon and a bunch of other elements but in much lesser quantities. Where does this carbon come from? Well, you could say it comes from the Earth and yes that is true. Liquid universe Public release date: 13-Oct-2004 [ Print | E-mail Share ] [ Close Window ] UK CONTACT - Claire Bowles claire.bowles@rbi.co.uk 44-207-611-1210New Scientist Press Office, London US CONTACT – Toni Marshalltoni.marshall@newscientist.com617-558-4939New Scientist Boston office

How to Find a Meteorite Earth is under constant bombardment by space rocks. When they crash and burn through the atmosphere, most of the debris gets lost to the oceans, while some is buried or gradually weathered away. Nonetheless, plenty of chunks of fallen meteors, or meteorites, are strewn across the accessible parts of the planet. Monkey teeth hint at a miraculous marine migration to North America Scientists have long thought that monkeys first ventured from South America into North America no earlier than about 4 million years ago, when the two continents merged. But seven teeth unearthed in Panama may change that story. These monkey teeth were discovered encased in 21-million-year-old rocks. This suggests that the primates accomplished the impossible: they crossed the more than 100 miles of ocean that separated South America from North America at the time. These prehistoric monkeys, which probably looked like today's capuchin monkeys, are the only mammals known to cross this watery boundary so early, says Jonathan Bloch.