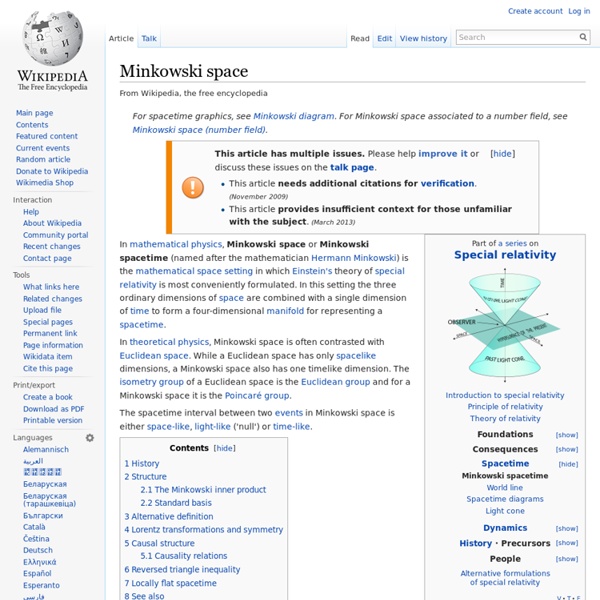 In theoretical physics, Minkowski space is often contrasted with Euclidean space. While a Euclidean space has only spacelike dimensions, a Minkowski space also has one timelike dimension. The isometry group of a Euclidean space is the Euclidean group and for a Minkowski space it is the Poincaré group. History[edit] In 1905 (published 1906) it was noted by Henri Poincaré that, by taking time to be the imaginary part of the fourth spacetime coordinate √−1 ct, a Lorentz transformation can be regarded as a rotation of coordinates in a four-dimensional Euclidean space with three real coordinates representing space, and one imaginary coordinate, representing time, as the fourth dimension. The views of space and time which I wish to lay before you have sprung from the soil of experimental physics, and therein lies their strength. For further historical information see references Galison (1979), Corry (1997), Walter (1999). Structure[edit] The Minkowski inner product[edit] Standard basis[edit] where

Minkowski diagram Minkowski diagram with resting frame (x,t), moving frame (x′,t′), light cone, and hyperbolas marking out time and space with respect to the origin. The Minkowski diagram, also known as a spacetime diagram, was developed in 1908 by Hermann Minkowski and provides an illustration of the properties of space and time in the special theory of relativity. It allows a quantitative understanding of the corresponding phenomena like time dilation and length contraction without mathematical equations. The term Minkowski diagram is used in both a generic and particular sense. In general, a Minkowski diagram is a graphic depiction of a portion of Minkowski space, often where space has been curtailed to a single dimension. These two-dimensional diagrams portray worldlines as curves in a plane that correspond to motion along the spatial axis. Basics[edit] A photon moving right at the origin corresponds to the yellow track of events, a straight line with a slope of 45°. Different scales on the axes. History

Gravitation Gravitation, or gravity, is a natural phenomenon by which all physical bodies attract each other. It is most commonly recognized and experienced as the agent that gives weight to physical objects, and causes physical objects to fall toward the ground when dropped from a height. During the grand unification epoch, gravity separated from the electronuclear force. History of gravitational theory Scientific revolution Modern work on gravitational theory began with the work of Galileo Galilei in the late 16th and early 17th centuries. Newton's theory of gravitation In 1687, English mathematician Sir Isaac Newton published Principia, which hypothesizes the inverse-square law of universal gravitation. Newton's theory enjoyed its greatest success when it was used to predict the existence of Neptune based on motions of Uranus that could not be accounted for by the actions of the other planets. Equivalence principle Formulations of the equivalence principle include: General relativity Specifics

Metric (mathematics) In differential geometry, the word "metric" may refer to a bilinear form that may be defined from the tangent vectors of a differentiable manifold onto a scalar, allowing distances along curves to be determined through integration. It is more properly termed a metric tensor. d : X × X → R (where R is the set of real numbers). For all x, y, z in X, this function is required to satisfy the following conditions: d(x, y) ≥ 0 (non-negativity, or separation axiom)d(x, y) = 0 if and only if x = y (identity of indiscernibles, or coincidence axiom)d(x, y) = d(y, x) (symmetry)d(x, z) ≤ d(x, y) + d(y, z) (subadditivity / triangle inequality). Conditions 1 and 2 together produce positive definiteness. A metric is called an ultrametric if it satisfies the following stronger version of the triangle inequality where points can never fall 'between' other points: For all x, y, z in X, d(x, z) ≤ max(d(x, y), d(y, z)) d(x, y) = d(x + a, y + a) for all x, y and a in X. If a modification of the triangle inequality

Hayashi track Stellar evolution tracks (blue lines) for the pre-main-sequence. The nearly-vertical curves are Hayashi tracks. Low-mass stars have nearly vertical evolution tracks until they arrive on the main sequence. For more massive stars, the Hayashi track bends lefts into the Henyey track. Even more massive stars are born directly onto the Henyey track. The end (leftmost point) of every track is labeled with the star's mass in solar masses, and represents its position on the main sequence. years old lie along the curve labeled , and similarly for the other 3 isochrones. The Hayashi track is a luminosity–temperature relationship obeyed by infant stars of less than 3 solar masses in the pre-main-sequence phase of stellar evolution. At an end of a low- or intermediate-mass star's life, the star follows an analogue of the Hayashi track, but in reverse—it increases in luminosity, expands, and stays at roughly the same temperature, eventually becoming a red giant. History[edit] where . Derivation[edit] .

Length contraction In physics, length contraction is the phenomenon of a decrease in length measured by an observer of objects which are traveling at any non-zero velocity relative to the observer. This contraction (more formally called Lorentz contraction or Lorentz–FitzGerald contraction after Hendrik Lorentz and George FitzGerald) is usually only noticeable at a substantial fraction of the speed of light. Length contraction is only in the direction parallel to the direction in which the observed body is travelling. where L0 is the proper length (the length of the object in its rest frame), L is the length observed by an observer in relative motion with respect to the object, v is the relative velocity between the observer and the moving object, c is the speed of light, and the Lorentz factor, γ(v), is defined as In this equation it is assumed that the object is parallel with its line of movement. History[edit] Basis in relativity[edit] Another method is to use a clock indicating its proper time and . . Since