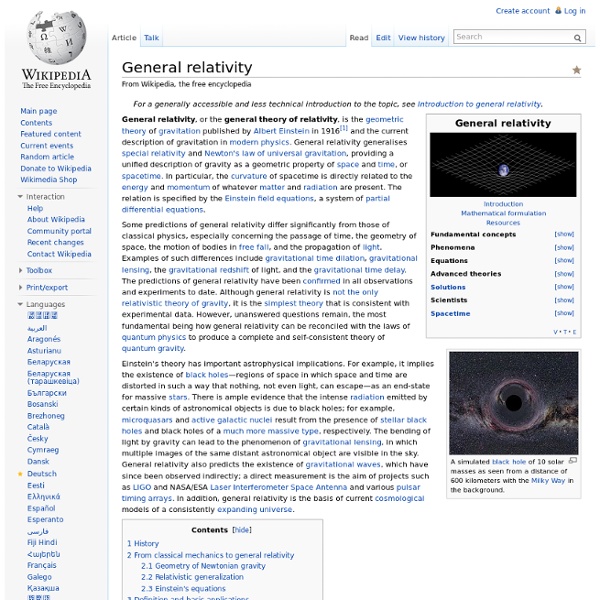 General relativity, or the general theory of relativity, is the geometric theory of gravitation published by Albert Einstein in 1916[1] and the current description of gravitation in modern physics. General relativity generalizes special relativity and Newton's law of universal gravitation, providing a unified description of gravity as a geometric property of space and time, or spacetime. In particular, the curvature of spacetime is directly related to the energy and momentum of whatever matter and radiation are present. The relation is specified by the Einstein field equations, a system of partial differential equations. Some predictions of general relativity differ significantly from those of classical physics, especially concerning the passage of time, the geometry of space, the motion of bodies in free fall, and the propagation of light. Einstein's theory has important astrophysical implications. History[edit] Albert Einstein developed the theories of special and general relativity. Related:  physics

Physics World reveals its top 10 breakthroughs for 2011 The two physics stories that dominated the news in 2011 were questions rather than solid scientific results, namely "Do neutrinos travel faster than light?" and "Has the Higgs boson been found?". However, there have also been some fantastic bona fide research discoveries over the last 12 months, which made it difficult to decide on the Physics World 2011 Breakthrough of the Year. But after much debate among the Physics World editorial team, this year's honour goes to Aephraim Steinberg and colleagues from the University of Toronto in Canada for their experimental work on the fundamentals of quantum mechanics. Using an emerging technique called "weak measurement", the team is the first to track the average paths of single photons passing through a Young's double-slit experiment – something that Steinberg says physicists had been "brainwashed" into thinking is impossible. We have also awarded nine runners-up (see below). 1st place: Shifting the morals of quantum measurement

Inflation (cosmology) In physical cosmology, cosmic inflation, cosmological inflation, or just inflation is a theory of exponential expansion of space in the early universe. The inflationary epoch lasted from 10−36 seconds after the Big Bang to sometime between 10−33 and 10−32 seconds. Following the inflationary period, the Universe continues to expand, but at a less rapid rate.[1] Inflation was developed in the early 1980s. In 2002, three of the original architects of the theory were recognized for their major contributions; physicists Alan Guth of M.I.T., Andrei Linde of Stanford and Paul Steinhardt of Princeton shared the prestigious Dirac Prize "for development of the concept of inflation in cosmology".[5] Overview An expanding universe generally has a cosmological horizon, which, by analogy with the more familiar horizon caused by the curvature of the Earth's surface, marks the boundary of the part of the Universe that an observer can see. Space expands . . Few inhomogeneities remain Duration Reheating Notes

Quantum Diaries (Thoughts on work and life from particle physicists from around the world.) Lambda-CDM model The ΛCDM or Lambda-CDM model is a parametrization of the Big Bang cosmological model in which the universe contains a cosmological constant, denoted by Lambda (Greek Λ), and cold dark matter (abbreviated CDM). It is frequently referred to as the standard model of Big Bang cosmology, since it is the simplest model that provides a reasonably good account of the following properties of the cosmos: the existence and structure of the cosmic microwave backgroundthe large-scale structure in the distribution of galaxiesthe abundances of hydrogen (including deuterium), helium, and lithiumthe accelerating expansion of the universe observed in the light from distant galaxies and supernovae The model assumes that general relativity is the correct theory of gravity on cosmological scales. Some alternative models challenge the assumptions of the ΛCDM model. Overview[edit] Lambda-CDM, Accelerated Expansion of the Universe. , is currently [2013] estimated to be 68.3%. History[edit] Successes[edit]

Big Bang According to the Big Bang model, the universe expanded from an extremely dense and hot state and continues to expand today. The graphic scheme above is an artist's concept illustrating the expansion of a portion of a flat universe. The Big Bang is the scientific theory that is most consistent with observations of the past and present states of the universe, and it is widely accepted within the scientific community. It offers a comprehensive explanation for a broad range of observed phenomena, including the abundance of light elements, the cosmic microwave background, large scale structure, and the Hubble diagram.[3] The core ideas of the Big Bang—the expansion, the early hot state, the formation of light elements, and the formation of galaxies—are derived from these and other observations. As the distance between galaxies increases today, in the past galaxies were closer together. Overview Timeline of the Big Bang The earliest phases of the Big Bang are subject to much speculation.

Newton's law of universal gravitation Newton's law of universal gravitation states that any two bodies in the universe attract each other with a force that is directly proportional to the product of their masses and inversely proportional to the square of the distance between them. (Separately it was shown that large spherically symmetrical masses attract and are attracted as if all their mass were concentrated at their centers.) This is a general physical law derived from empirical observations by what Isaac Newton called induction.[2] It is a part of classical mechanics and was formulated in Newton's work Philosophiæ Naturalis Principia Mathematica ("the Principia"), first published on 5 July 1687. (When Newton's book was presented in 1686 to the Royal Society, Robert Hooke made a claim that Newton had obtained the inverse square law from him – see History section below.) In modern language, the law states the following: History[edit] Early History[edit] Plagiarism dispute[edit] Hooke's work and claims[edit] Vector form[edit]

Usenet Physics FAQ Version Date: March 2013 This list of answers to frequently asked questions in physics was created by Scott Chase in 1992. Its purpose was to provide good answers to questions that had been discussed often in the sci.physics and related Internet news groups. The articles in this FAQ are based on those discussions and on information from good reference sources. Most of the entries that you'll find here were written in the days when the Internet was brand new. So because of their age, the FAQ entries that you'll find here have a great deal of academic credibility—but they are not always perfect and complete. This document is copyright. General Physics Particle and Nuclear Physics Quantum Physics Relativity and Cosmology Speed of Light Special Relativity General Relativity and Cosmology Black Holes Reference Topics There are many other places where you may find answers to your question. This FAQ is currently available from these web sites: Australia: