View the Universe in different wavelengths 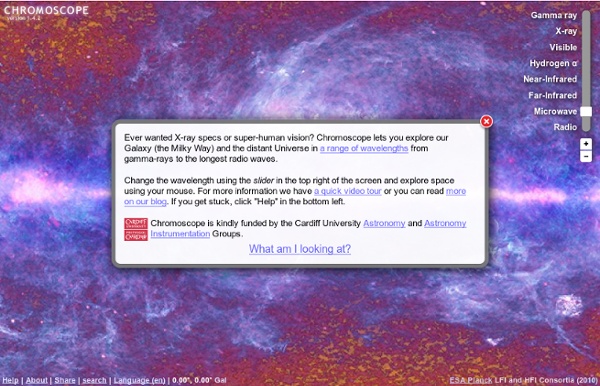 Ever wanted X-ray specs or super-human vision? Chromoscope lets you explore our Galaxy (the Milky Way) and the distant Universe in a range of wavelengths from gamma-rays to the longest radio waves. Change the wavelength using the slider in the top right of the screen and explore space using your mouse. For more information we have a quick video tour or you can read more on our blog. If you get stuck, click "Help" in the bottom left. Chromoscope is kindly funded by the Cardiff University Astronomy and Astronomy Instrumentation Groups. Took 1630ms to load.

Usenet Physics FAQ Version Date: March 2013 This list of answers to frequently asked questions in physics was created by Scott Chase in 1992. Its purpose was to provide good answers to questions that had been discussed often in the sci.physics and related Internet news groups.

The Great Attractor The Question (Submitted September 24, 1999) The great attractor has been described as an agglomeration of matter. The Online Learning Blog from Study2U Supposedly browsing the internet requires more brain power than watching television. Although judging from some of the websites we’ve come across that assumption is cast into doubt. Here’s some of the sites we like that might get your brain to sit up and listen. Ted A conference that started in 1984 bringing together experts in technology, entertainment and design quickly grew into so much more. The conference itself is invitation only, but the website features all the talks at the conference in high res video format. Special Relativity Special Relativity These pages are ok as far as they go, but they are missing the planned highlight, to show you what things actually look like when you travel at near the speed of light. I hope to have the opportunity to develop these pages further as time permits. Here is my opinionated Guide to Special Relativistic Flight Simulator Sites. Meanwhile, these pages comprise an animated introduction to the elements of Special Relativity. Some of the fun stuff:

Great Attractor Panoramic view of the entire near-infrared sky. The location of the Great Attractor is shown following the long blue arrow at bottom-right. The Hubble Telescope turned its lens to the region of the sky where the Great Attractor is located. The Great Attractor is a gravity anomaly in intergalactic space within the range of the Hydra-Centaurus Supercluster that reveals the existence of a localized concentration of mass equivalent to tens of thousands of galaxies, each of which represents the mass of the Milky Way; this mass is observable by its effect on the motion of galaxies and their associated clusters over a region hundreds of millions of light-years across. These galaxies are all redshifted, in accordance with the Hubble Flow, indicating that they are receding relative to us and to each other, but the variations in their redshift are sufficient to reveal the existence of the anomaly.

Progressivism in the United States Progressivism in the United States is a broadly based reform movement that reached its height early in the 20th century and is generally considered to be middle class and reformist in nature. It arose as a response to the vast changes brought by modernization, such as the growth of large corporations and railroads, and fears of corruption in American politics. In the 21st century, progressives continue to embrace concepts such as environmentalism and social justice.[1] Social progressivism, the view that governmental practices ought to be adjusted as society evolves, forms the ideological basis for many American progressives. One historian defined progressivism as the "political movement that addresses ideas, impulses, and issues stemming from modernization of American society.

110+ Variations of the Second Law of Thermodynamics Questions about these second law variations? Know of other second law definitions? Copyright © Institute of Human Thermodynamics and IoHT Publishing Ltd. All Rights Reserved [1] Hippocrates (c. 440 BC).