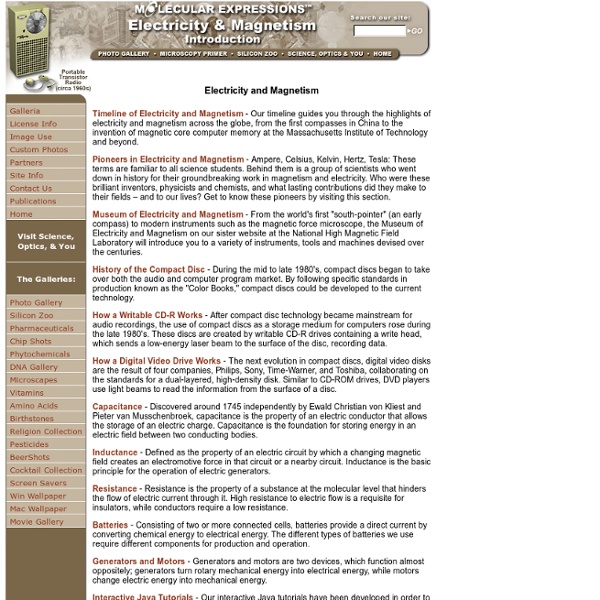 Science, Optics and You Online Activities for Students The following activities are provided to help you investigate light, optics, and color. They were written by educators with input from scientists, researchers, students, and teachers. Students, teachers, and parents are encouraged to work together to begin an exploration of concepts that help us learn about how we see our world. Activity 1: Perspectives: Powers of 10 - Scientists look at things using their eyes, but they also use a wide variety of specialized tools that give them extra capabilities. Activity 2: K-W-L: What I Know, What I Want to Know, What I Learned - The K-W-L chart is a way for you to put in writing some of your ideas about lenses. Activity 3: Using Media to Explore Light and Optics - Much of the information that you get comes from the media--newspapers, magazines, radio, and television. Activity 5: Looking Through Lenses - There are many different types of lenses, each with their own characteristics and behaviors. How Does It Work?

museum of science, art and human perception Transformers In the photograph, note that the coil on the left has fewer coils than that at right (the insets show close-ups). The sketch and circuit show a step-up transformer. To make a step-down transformer, one only has to put the source on the right and the load on the left. (Important safety note: for a real transformer, you could only 'plug it in backwards' only after verifying that the voltage rating were appropriate.) The core (shaded) has high magnetic permeability (ie a material that forms a magnetic field much more easily than free space does, due to the orientation of atomic dipoles). Vp = − Np.dφ/dt . VpIp = VsIs, whence Is/Ip = Np/Ns = 1/r. So you don't get something for nothing: if you increase the voltage, you decrease the current by at least the same factor. In some cases, decreasing the current is the aim of the exercise.

ippex online - main The Physics Classroom 7 Man-Made Substances that Laugh in the Face of Physics | Cracke The universe is full of weird substances like liquid metal and whatever preservative keeps Larry King alive. But mankind isn't happy to accept the weirdness of nature when we can create our own abominations of science that, due to the miracle of technology, spit in nature's face and call it retarded. That's why we came up with... #7. What do you get when you suspend nanoparticles of iron compounds in a colloidal solution of water, oil and a surfactant? A ferrofluid is a liquid that reacts to magnetic fields in trippy ways that make you think that science is both magical and potentially evil. Tell us that didn't look like the birth of the most sinister dildo ever. What happens is that when a magnetic field is applied to the fluid, the particles of iron compound inside align to it. What the Hell is it Used For? Ferrofluids have a lot of pretty mundane uses, from lubricating and protecting hard drives to providing heat conduction in speakers, but their primary use is in looking cool. #6. #5.

Circuit Simulator Applet This is an electronic circuit simulator. When the applet starts up you will see an animated schematic of a simple LRC circuit. The green color indicates positive voltage. The gray color indicates ground. A red color indicates negative voltage. To turn a switch on or off, just click on it. The "Circuits" menu contains a lot of sample circuits for you to try. Full Screen version. Directions. Standalone (offline) versions. Index of Circuit Examples. More applets. Javascript version. Report a problem/feature request Huge thanks to Iain Sharp for the Javascript port. java@falstad.com

Home | Practical Physics Find out about our education projects and free teaching resources from the links on this page. We also offer opportunities for school and college students to take part in STEM-related research over their summer holidays through our Nuffield Research Placements. Our work in education includes funding research and supporting its translation into policy and practice. Our current focus is in science and mathematics, foundations for learning, and secondary education transitions. In the past, we have worked in other subject areas including D&T, history, and languages, and further information is available on our curriculum projects page.

Physics_For_Entertaiment : Perelman Discover Magazine dark matter Your hands are, roughly speaking, 360 million years old. Before then, they were fins, which your fishy ancestors used to swim through oceans and rivers. Once those fins sprouted digits, they could propel your salamander-like ancestors across dry land. Fast forward 300 million years, and your hands had become fine-tuned for manipulations: your lemur-like ancestors used them to grab leaves and open up fruits. Within the past few million years, your hominin ancestors had fairly human hands, which they used to fashion tools for digging up tubers, butchering carcasses, and laying the groundwork for our global dominance today. We know a fair amount about the transition from fins to hands thanks to the moderately mad obsession of paleontologists, who venture to inhospitable places around the Arctic where the best fossils from that period of our evolution are buried. A team of Spanish scientists has provided us with a glimpse of that story. Both fins and hands get their start in embryos.

Physics 121.6 Applets The following is a list of applet collections that you may find useful. In the table above however I have links to a few of the many applets available on the web that I think are most useful in illustrating the concepts of this course. Applets 1 - Graphs of Position and Velocity This Applet shows a cow on roller skates! Note the shape of the position vs. time graph and the velocity verses time graph for each of the following cases. Try different non-zero initial velocities with zero acceleration. This second applet displays much the same thing. Run Applet... Applets 2 - Vector Addition This Shockwave applet shows the addition of two vectors (Red vector + Green vector = Blue vector). Run Applet... Another applet which shows much the same thing in a slightly different way.... Run Applet... Applets 3 - Projectile Motion This Applet shows the path of a cannonball fired into the air over a horizontal ground. Run Applet... Here is another applet showing projectile motion with no air resistance.