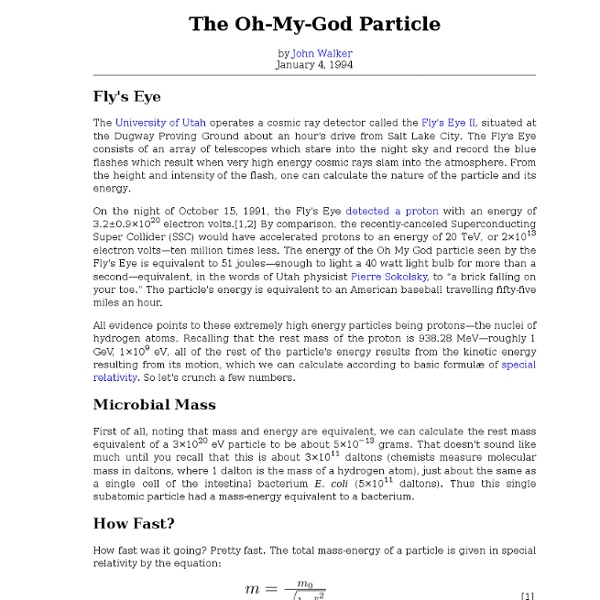 by John Walker January 4, 1994 Fly's Eye The University of Utah operates a cosmic ray detector called the Fly's Eye II, situated at the Dugway Proving Ground about an hour's drive from Salt Lake City. The Fly's Eye consists of an array of telescopes which stare into the night sky and record the blue flashes which result when very high energy cosmic rays slam into the atmosphere. From the height and intensity of the flash, one can calculate the nature of the particle and its energy. On the night of October 15, 1991, the Fly's Eye detected a proton with an energy of 3.2±0.9×1020 electron volts.[1,2] By comparison, the recently-canceled Superconducting Super Collider (SSC) would have accelerated protons to an energy of 20 TeV, or 2×1013 electron volts—ten million times less. All evidence points to these extremely high energy particles being protons—the nuclei of hydrogen atoms. Microbial Mass How Fast? How fast was it going? And thus, approximately: v = 0.9999999999999999999999951 c Quicktime

Space-Time Diagrams Any discussion of cosmology requires a careful consideration of what we can see and when we can see it. A good way to keep track of these concepts is the space-time diagram. A space-time diagram is nothing more than a graph showing the position of objects as a function of time. The usual convention is that time runs up the diagram, so the bottom is the past, or early times, and the top is the future, or late times. The picture above shows a space-time diagram of the Earth going around the Sun. The line representing the position of the Earth as a function of time is called a worldline. The space-time diagram above shows particles with different velocities. Because the speed of light is special in relativity, space-time diagrams are often drawn in units of seconds and light-seconds, or years and light-years, so a unit slope [45 degree angle] corresponds to the speed of light. Back to the Cosmology Tutorial

SlipperyBrick.com. Dropping Gadgets, Breaking News Full Impulse on my mark… engage! | A User's Guide to the Universe There has been a ton of chatter on the interwebs about yet another potentially habitable planet in the Gliese 581 system, approximately 20.5 light years from earth. This one, Gliese 581g, was discovered by the Lick-Carnegie Exoplanet Survey using Keck. Based on its size, is approximately 3 earth masses, with roughly earth-like gravity. More important still, is the fact that it’s roughly in the middle of the “Goldilocks zone“ Most everyone is focusing on the unfortunate fact that 581g seems to be tidally locked with its sun, which means that one side is blazing hot, and the other is freezing cold (and, of course, that there’d be only either day or night on each side). But who cares? Let’s go now. The Trip to Gliese 581g I’ve explored this sort of topic a number of times before. But if you don’t want to do all of that reading, let me just sketch it out for you. You are going to want to accelerate at g by the way, since one of 581g’s main selling points is the earth-normal gravity. -Dave

Moving slabs [This Dynamic Earth, USGS] The layer of the Earth we live on is broken into a dozen or so rigid slabs (called tectonic plates by geologists) that are moving relative to one another. "Historical perspective" 15 Essential Moments To (Re)Visit if You Had a Time Machine Written by Akela Talamasca Let’s say you get your hands on a brand new Time Machine. Whether it’s the old-school H.G. Wells chair model, or a tricked-out DeLorean, you’ve now got to decide what you’re going to do with your new toy. But before you run off and start messing up your life, sleeping with your grandmother, and investing in Google stock before the Internet was invented, we’ve got a few ideas for you. The Trinity Test (Past) Source If you want to see one of the most awe-inspiring events in human history, then you need to set your time machine for 5:29 AM, July 16th 1945 at Alamogordo, New Mexico. The Roswell Crash (Past) Source Whether it was a UFO or a weather balloon, it’s time we found out just what went down around Roswell, New Mexico on the night of July 2nd, 1947. Birth of the First True Artificial Intelligence (Future) Source In the movies the first A.I. always turns out to be a total asshole. The First Modern Olympic Games (Past) Source Source Source The Fall of Rome (Past) Source

Another dose of Martian awesome If someone woke me out of a sound sleep and forced me at gunpoint to say which is my favorite camera in the solar system, they’d probably have to shoot me. But I think that HiRISE onboard the Mars Reconnaissance Orbiter would be in the top three. And it’s pictures like this one that put it there: [Click to get to greatly embiggened pictures.] That is not a closeup of my chin before I shave. But what are those weird tendril thingies? In the Martian winter, carbon dioxide freezes out of the air (and you thought it was cold where you are). Now, you might think I’m making this all up. Oh, baby. I love stuff like this. Awe. We’ve seen this before on Mars, but it’s still shocking and amazing. If we can see this kind of thing from space, with robotic probes, what will humans see when they go there and can kick over some rocks?