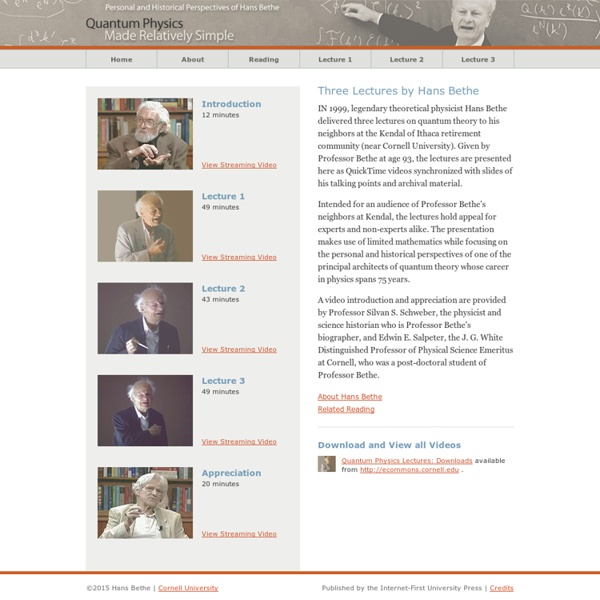 Three Lectures by Hans Bethe IN 1999, legendary theoretical physicist Hans Bethe delivered three lectures on quantum theory to his neighbors at the Kendal of Ithaca retirement community (near Cornell University). Given by Professor Bethe at age 93, the lectures are presented here as streaming videos synchronized with slides of his talking points and archival material. Intended for an audience of Professor Bethe's neighbors at Kendal, the lectures hold appeal for experts and non-experts alike. The presentation makes use of limited mathematics while focusing on the personal and historical perspectives of one of the principal architects of quantum theory whose career in physics spans 75 years. A video introduction and appreciation are provided by Professor Silvan S.

Site Redirect People from nearly every country share information with CIA, and new individuals contact us daily. If you have information you think might interest CIA due to our foreign intelligence collection mission, there are many ways to reach us. If you know of an imminent threat to a location inside the U.S., immediately contact your local law enforcement or FBI Field Office. For threats outside the U.S., contact CIA or go to a U.S. Embassy or Consulate and ask for the information to be passed to a U.S. official. Please know, CIA does not engage in law enforcement. Is Dark Energy Really "Repulsive Gravity"? In 1998 scientists discovered that the universe is not only expanding but that its expansion is accelerating. This totally unexpected behavior has been called the "most profound problem" in physics , because our current understanding of gravity says that attractions between mass in the universe should be causing the expansion to slow down. The leading theory to explain the accelerating expansion is the existence of a hypothetical repulsive force called dark energy. (Related: "New Galaxy Maps to Help Find Dark Energy Proof?"

Beginning and End of the Universe July 26, 2010 § Universe History * The diagram below outlines the major Eras of the Universe according to the Big Bang Theory. Click the picture for many more details and a larger image. The one line in the article that caught my attention the most was at the end. Flying by the seat of his seat Canada's Air Force Capt. Brian Bews ejects as his a CF-18 fighter jet plummets to the ground during a practice flight for an airshow at the Lethbridge County Airport on Friday, July 23, 2010, in Lethbridge, Alberta, Canada. Logical Fallacies and How to Spot Them Logical Fallacies and How to Spot Them In the Evolution vs. Creationism debate, it is important to be able to spot all the logical fallacies that Creationists tend to throw around.

Researchers now able to stop, restart light By William J. Cromie Gazette Staff "Two years ago we slowed it down to 38 miles an hour; now we've been able to park it then bring it back up to full speed." Big Bang Abandoned in New Model of the Universe July 29, 2010 § This is one of the most exciting theories I have heard in a long time. I am going to tell you why and you are going to think I am even nuttier than you already do. But, as you know, I don’t care. One night after watching some documentary about Stephen Hawking and the black hole wars, I was lying in bed just contemplating the Universe.

Model describes universe with no big bang, no beginning, and no end (PhysOrg.com) -- By suggesting that mass, time, and length can be converted into one another as the universe evolves, Wun-Yi Shu has proposed a new class of cosmological models that may fit observations of the universe better than the current big bang model. What this means specifically is that the new models might explain the increasing acceleration of the universe without relying on a cosmological constant such as dark energy, as well as solve or eliminate other cosmological dilemmas such as the flatness problem and the horizon problem. Shu, an associate professor at National Tsing Hua University in Taiwan, explains in a study posted at arXiv.org that the new models emerge from a new perspective of some of the most basic entities: time, space, mass, and length. In his proposal, time and space can be converted into one another, with a varying speed of light as the conversion factor. As Shu writes in his paper, the newly proposed models have four distinguishing features:

The Evolutionary Psychology of Human Sex and Gender By Daniel Pouzzner, 2000-Apr-11/12 Sexuality is an indispensable mechanism whereby biological evolution bridged the immense gap between asexual/Lamarckian unicellular organisms, and the now plainly preeminent humans. For tens of millions of generations, the lineage leading to humanity has been formed and continued exclusively by sexual procreation. The precise microbiological mechanics of sexuality vary widely from species to species, while the functional consequences - strictly sexual procreation, in which each individual has precisely two parents, each contributing roughly half of the individual's genome - is absolutely conserved.

Weird Houses Living in a box doesn't look so strange after this... You shouldn't run or jump through this house. Especially if you don't swim.

(Personal and Historical Perspectives of Hans Bethe) by betlamed Aug 17