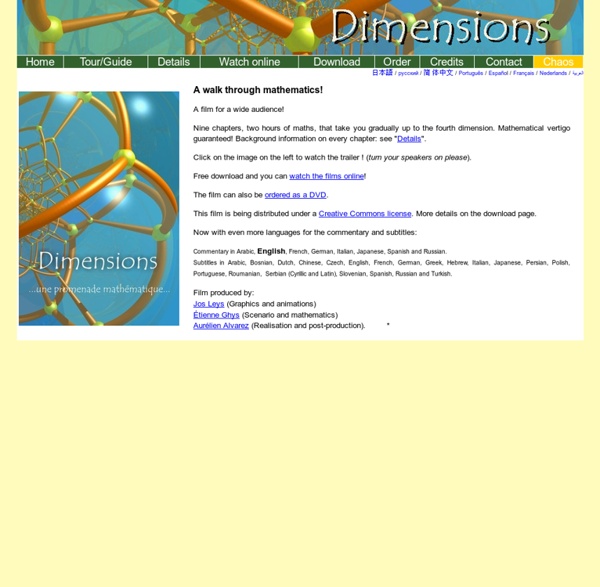 A film for a wide audience! Nine chapters, two hours of maths, that take you gradually up to the fourth dimension. Mathematical vertigo guaranteed! Background information on every chapter: see "Details". Click on the image on the left to watch the trailer ! (turn your speakers on please). Free download and you can watch the films online! The film can also be ordered as a DVD. This film is being distributed under a Creative Commons license. Now with even more languages for the commentary and subtitles: Commentary in Arabic, English, French, German, Italian, Japanese, Spanish and Russian. Film produced by: Jos Leys (Graphics and animations) Étienne Ghys (Scenario and mathematics) Aurélien Alvarez (Realisation and post-production)

Chinese Calligraphy 中國書法 谢順佳 ( Chinese : 李 白 ; pinyin : , 701 – 762, also well known as , among other transliterations ) was a major Chinese poet of the Tang dynasty poetry period . Regarded as one of the greatest poets of the Tang Dynasty , often called China's "golden age" of poetry, Li Bai was both a prolific and a profound poet, as well as one who stretched the rules of versification of his time. Around a thousand yet existing poems are attributed to him. [ 1 ] Thirty-four of his poems are included in the popular anthology . In the area of Chinese cultural influence, Li Bai's poetry has been much esteemed from his lifetime through the present day. His influence also extends to the West through many translations, adaptations, and much inspiration. Li (李) is the family name , or surname; however, he has been and is known by various names.

One Sad Monkey » Carl Sagan What lady could resist my turtleneck? I was listening to the love story between Carl Sagan and his third and final wife Anne Druyan from an episode in Radiolab. I kept playing it again and again because there this gigantic gap in the story that seems to require a giant cognitive leap that I just couldn’t make. Carl was on his second marriage with his wife Linda Salzman with which he had a child with. Articles on "Electricity" Why three prongs?Why do wall outlets have three holes? "Grounding" and safety. Right Angle CircuitryDo Lenz' Law and the Right Hand rule still work... after you've been turned INSIDE OUT by that greasy black Fog?

Free fraction videos online Enjoy free online math videos on these fraction topics: (Fraction videos, part 2, are on this page.) The videos are recorded in high-density (HD) and are viewable both here as well as at my Youtube channel. These videos are usable for students, teachers, and parents. Englert–Greenberger duality relation The Englert–Greenberger duality relation relates the visibility, , of interference fringes with the definiteness, or distinguishability, , of the photons' paths in quantum optics.[1][2][3] As an inequality: The relationship was first experimentally shown by Greenberger and Yassin in 1988. It was later theoretically derived by Jaeger, Shimony, and Vaidman in 1995, and over a year later it was also mentioned by Englert, in 1996.

Bad Astronomy Well now, this is an interesting discovery: astronomers have found what looks like a "super-Earth" – a planet more massive than Earth but still smaller than a gas giant – orbiting a nearby star at the right distance to have liquid water on it! Given that, it might – might – be Earthlike. This is pretty cool news. We’ve found planets like this before, but not very many! And it gets niftier: the planet has at least five siblings, all of which orbit its star closer than it does. Special Relativity Special Relativity These pages are ok as far as they go, but they are missing the planned highlight, to show you what things actually look like when you travel at near the speed of light. I hope to have the opportunity to develop these pages further as time permits. Here is my opinionated Guide to Special Relativistic Flight Simulator Sites.

s Guide Interactive Math Resources Interactive Math Websites, Math Websites for Interactive Whiteboards Interactive Math Websites for Interactive Whiteboards Manipulatives eVa en double slit The double-slit experiment is a demonstration that light and matter can display characteristics of both classically defined waves and particles; moreover, it displays the fundamentally probabilistic nature of quantum mechanical phenomena. The experiment belongs to a general class of "double path" experiments, in which a wave is split into two separate waves that later combine back into a single wave. Changes in the path lengths of both waves result in a phase shift, creating an interference pattern. Another version is the Mach–Zehnder interferometer, which splits the beam with a mirror. This experiment is sometimes referred to as Young's experiment and while there is no doubt that Young's demonstration of optical interference, using sunlight, pinholes and cards, played a vital part in the acceptance of the wave theory of light, there is some question as to whether he ever actually performed a double-slit interference experiment.[1] Overview[edit]

Usenet Physics FAQ Version Date: March 2013 This list of answers to frequently asked questions in physics was created by Scott Chase in 1992. Its purpose was to provide good answers to questions that had been discussed often in the sci.physics and related Internet news groups. The articles in this FAQ are based on those discussions and on information from good reference sources. They were later maintained and enlarged by Michael Weiss and Philip Gibbs.

Phi 1.618 ø PHI: The Golden Ratio or Golden Section (In Nature, Art, Science and Religion) The Golden Section is a unique Ratio (or relationship between parts) that seems to be preferred by Nature as the best geometry for growth, energy conservation, elegance and has some fundamental relationships to the platonic solids and the Mandelbrot set. It was formally discovered by the Greeks and incorporated into their art and architecture, but it has been shown to occur even in prehistoric art, possibly as a function of Man's natural affinity for it's beauty. The rectangle at left has a vertical edge length of 1 the horizontal or width of the rectangle is 1.618 If we make a line inside and form a square (far left) it creates another 'golden rectangle' (at right) this subdivision continues inward in a spiral fashion tracing the form of a perfect PHI spiral seen in galaxies, seashells .... Even your hand, arm, ear, teeth, etc are in PHI Proportions!

One-electron universe The one-electron universe hypothesis, commonly associated with Richard Feynman when he mentioned it in his Nobel lecture,[1] postulates that there exists only a single electron in the universe, propagating through space and time in such a way as to appear in many places simultaneously. History[edit] Feynman's thesis advisor, John Wheeler, proposed the hypothesis in a telephone call to Feynman in the spring of 1940.