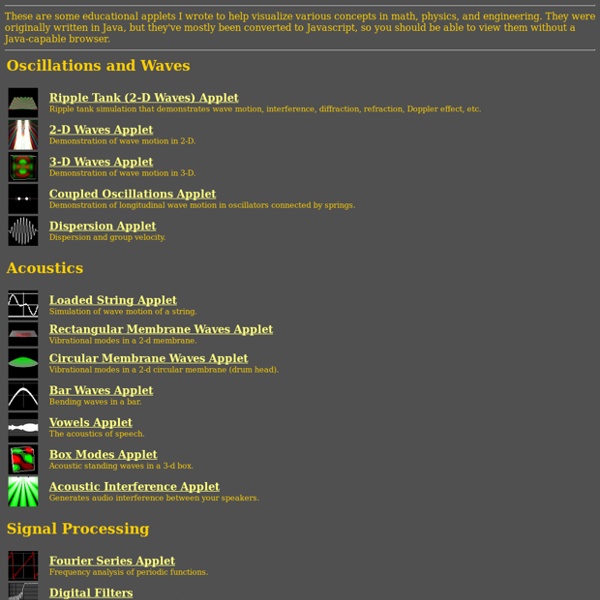 Oscillations and Waves Acoustics Signal Processing Electricity and Magnetism: Statics Electrodynamics Quantum Mechanics Linear Algebra Vector Calculus Thermodynamics Mechanics Miscellaneous Licensing info. Links to other educational sites with math/physics-related information or java applets useful for teaching: And when you get tired of learning, here is some fun stuff: Java Pong Applet a cute little pong game I wrote a while ago.

Peanut Software Homepage Page last updated: 13 Sept 12 For automatic notification of updates to these pages, you can subscribe to my RSS feed. My page of FAQ (27 Sept 10) is added to as necessary. If you encounter a significant problem (26 Jun 12), you may wish to share the details (my e-mail address is in the Help|About dialog box). Click the following links to reach the download pages: Wingeom (14 Jul 12) Winplot (13 Sep 12) Winstats (07 Aug 12) Winarc (08 Dec 11) Winfeed (13 Jun 12) Windisc (08 Sep 12) Winmat (25 Jul 12) Wincalc (05 Sep 12) Winwordy (22 Aug 12) Documents (14 Mar 11) String Theorists Squeeze Nine Dimensions Into Three A simulation of the early universe using string theory may explain why space has three observable spatial dimensions instead of nine. The leading mathematical explanation of physics goes beyond modern particle theory by positing tiny bits of vibrating string as the fundamental basis of matter and forces. String theory also requires that the universe have six or more spatial dimensions in addition to the ones observed in everyday life. Explaining how those extra dimensions are hidden is a central challenge for string theorists. “This new paper demonstrates, for the first time, that our 3-D space appears naturally … from the 9-D space that string theory originally has,” says Jun Nishimura of the High Energy Accelerator Research Organization in Tsukuba, Japan. He and his colleagues will publish their findings in an upcoming issue of Physical Review Letters.

Physics Flash Animations We have been increasingly using Flash animations for illustrating Physics content. This page provides access to those animations which may be of general interest. The animations will appear in a separate window. The animations are sorted by category, and the file size of each animation is included in the listing. Also included is the minimum version of the Flash player that is required; the player is available free from The categories are: In addition, I have prepared a small tutorial in using Flash to do Physics animations. The Science Creative Quarterly & A DIALOGUE WITH SARAH, AGED 3: IN WHICH IT IS SHOWN THAT IF YOUR DAD IS A CHEMISTRY PROFESSOR, ASKING “WHY” CAN BE DANGEROUS - StumbleUpon SARAH: Daddy, were you in the shower? DAD: Yes, I was in the shower. SARAH: Why?

Free Online Physics Courses Get free online Physics courses online from the world's leading universities. You can download these audio & video courses straight to your computer or mp3 player. The collection includes introductory physics courses recorded at top universities (e.g. Higgs Running Out Of Hiding Places Even as physicists in Europe close in on their most-wanted quarry — a particle known as the Higgs boson — scientists in Illinois are helping narrow the hunt. New measurements of a different particle, one called the W boson, confirm the Higgs is in the mass range that most physicists had thought. Theory suggests that the Higgs particle must exist in order to imbue many other particles with mass. Experiments at the Large Hadron Collider, at the CERN laboratory near Geneva, have shown that the Higgs’ own mass must be less than 127 billion electron volts. (Though it sounds like a unit of electricity, the electron volt is particle physicists’ fundamental unit of mass. A proton’s mass is about 1 billion electron volts.)

Flying by the seat of his seat Canada's Air Force Capt. Brian Bews ejects as his a CF-18 fighter jet plummets to the ground during a practice flight for an airshow at the Lethbridge County Airport on Friday, July 23, 2010, in Lethbridge, Alberta, Canada. Science Xplained Science Xplained is a collection of video podcasts that tell the stories of the science behind everyday topics. Dr. Ainissa G. Ramirez, self-proclaimed science evangelist and associate professor of mechanical engineering and materials science at Yale University, is the dynamic host of the series. Filter Resources by Grade: Videos World's Top Scientists Ponder: What If The Whole Universe Is, Like, One Huge Atom? PALO ALTO, CA—Gathering for what members of the international science community are calling "potentially the most totally out-to-lunch freaky head trip since Einstein postulated that space and time were, like, curved and shit," a consortium of the world's top physicists descended upon Stanford University Monday to discuss some of the difficult questions facing the cutting edge of theoretical thinking. Cal Tech physicist Dr. Jonathan Friedrich postulates a bunch of freaky shit that makes his colleagues' heads spin right the hell off. Among the revolutionary ideas expected to be raised at the historic week-long summit is the possibility that, like, our whole friggin' universe might be just one big atom in, say, some super-duper huge thing out there somewhere, or something. "Whoa, man," Dr. Jacob "The Boz" Bozeman of MIT told reporters.