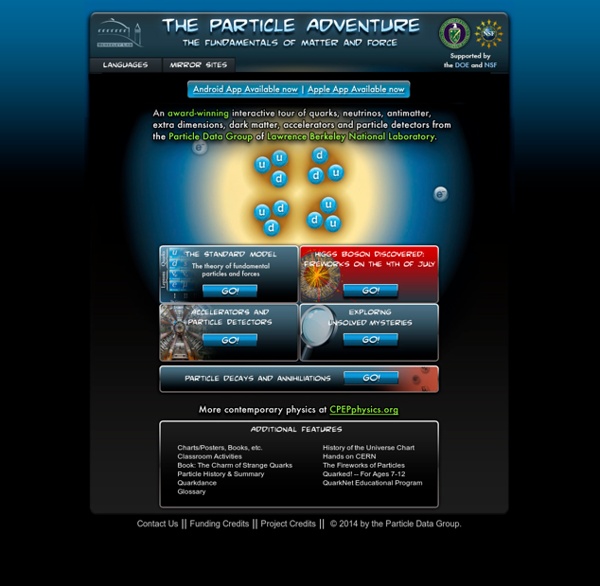 Standard Model The Standard Model of particle physics is a theory concerning the electromagnetic, weak, and strong nuclear interactions, as well as classifying all the subatomic particles known. It was developed throughout the latter half of the 20th century, as a collaborative effort of scientists around the world.[1] The current formulation was finalized in the mid-1970s upon experimental confirmation of the existence of quarks. Since then, discoveries of the top quark (1995), the tau neutrino (2000), and more recently the Higgs boson (2013), have given further credence to the Standard Model. Because of its success in explaining a wide variety of experimental results, the Standard Model is sometimes regarded as a "theory of almost everything". Historical background[edit] The Higgs mechanism is believed to give rise to the masses of all the elementary particles in the Standard Model.

The Museum of Unworkable Devices Physics Gallery Perpetual motion machine inventors do have principles. Unfortunately the physical principles they assume are often ones not obeyed by nature. Let's examine just a few. The principle of unlimited possibility. Anything is possible in nature. Lesson Plans The lesson plans presented here are a sampling from NWF's collection of over 1,000 lesson plans designed to introduce students to life science, ecology, wildlife biology, scientific identification and observation. All lesson plans are aligned to the National Science Education Standards. Check back regularly! We will be continually adding to our online library of resources for educators, beginning with the addition of lesson plans from our NatureScope series. Habitat

Physics To Go: Explore Physics on your own image credit: U.S. Air Force; image source; larger image Newton's 3rd Law What is the purpose of the small rotor on the back of this helicopter? Keys 2 Cognition - Cognitive Processes 47. Trust what emerges from brainstorming. 48. Quantum Physics Quantum Physics What it is? Quantum physics is a branch of science that deals with discrete, indivisible units of energy called quanta as described by the Quantum Theories. Quantum physics invloves the study of the realm of the very small, at the atomic and subatomic level, such as electrons, photons and quarks. Therefore, it’s operating at the below-cell level of the body.

Physics Flash Animations We have been increasingly using Flash animations for illustrating Physics content. This page provides access to those animations which may be of general interest. The animations will appear in a separate window. The animations are sorted by category, and the file size of each animation is included in the listing. Also included is the minimum version of the Flash player that is required; the player is available free from The categories are: In addition, I have prepared a small tutorial in using Flash to do Physics animations. Force Carrier Particles Fact File Physics for Beginners - What are Force Carrier Particles? This hub aims to summarise the facts you should already know about force carrier particles and their interactions. In order for you to apply the facts that follow in this hub, you will need to have already learned about the fundamental particles that comprise our universe. If you haven't already done so or need to recap, see:

50 Really Cool Online Tools for Science Teachers A 21st-century education revolves around the Internet for everything from collaboration, tools, lessons, and even earning degrees online. If you are looking for ways to integrate online learning into your science class or science degree programs, then take a look at these cool online tools that are just perfect for both teachers and students. Science Tools to Use with Students Einstein for Everyone Einstein for Everyone Nullarbor Press 2007revisions 2008, 2010, 2011, 2012, 2013 Copyright 2007, 2008, 2010, 2011, 2012, 2013 John D. Norton Published by Nullarbor Press, 500 Fifth Avenue, Pittsburgh, Pennsylvania 15260 with offices in Liberty Ave., Pittsburgh, Pennsylvania, 15222 All Rights Reserved John D.