HPS 0410 Einstein for Everyone 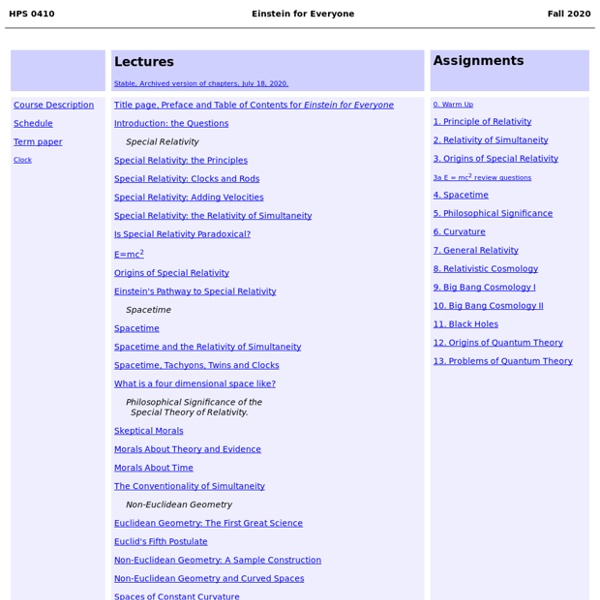 Articles on "Electricity" Why three prongs?Why do wall outlets have three holes? "Grounding" and safety. Right Angle CircuitryDo Lenz' Law and the Right Hand rule still work... after you've been turned INSIDE OUT by that greasy black Fog? "Static Electric" misconceptionsA list of things which gave me a warped view of Electrostatics. Speed of "Electricity"? Triboelectric Series If a cat gets trapped in a clothes dryer full of nylon pantyhose, which way do the electrons flow? Where does EM energy flow in a circuit? How Scientists Define the word "Electricity" Quotes from J.C. Barriers to Understanding ElectricityTwenty misconceptions which prevented me from understanding simple electrical science as a student. "Static" Electricity is really just high voltage.Scuff on the rug, then measure your body voltage. Electricity mistakes and 'nitpicking' also How SHOULD we teach Electricity? "Static" sparks Doorknob sparks and zapping yourself on the car door... and people who suffer from an "electric shock" disease.

Physics | Main Richard Feynman is a hero of mine. If you like physics, you should get to know his work. You can find a list of Feynman resources here. A note on how I teach mechanics The kinematic equations are commonly presented and used in the mechanics portion of introductory physics courses. The problem I have with introducing them too early is that they lead to a rote approach to problem solving that in the end won't serve you well in your study of physics. Instead, I strongly suggest that you solve every problem as if you were "re-inventing the wheel" every time. Think about problems in the simplest terms: What is happening physically? You'll find that in no time, as you repeat similar kinds of problems and as you notice patterns, that you'll start to take shortcuts. All of the problems solved in problem sets and examples in this section are solved using this approach.

Usenet Physics FAQ Version Date: March 2013 This list of answers to frequently asked questions in physics was created by Scott Chase in 1992. Its purpose was to provide good answers to questions that had been discussed often in the sci.physics and related Internet news groups. The articles in this FAQ are based on those discussions and on information from good reference sources. They were later maintained and enlarged by Michael Weiss and Philip Gibbs. Others who have written for the FAQ are credited at the top of the items they submitted, while many more who have made smaller contributions have been thanked privately. Most of the entries that you'll find here were written in the days when the Internet was brand new. So because of their age, the FAQ entries that you'll find here have a great deal of academic credibility—but they are not always perfect and complete. This document is copyright. General Physics Particle and Nuclear Physics Quantum Physics Relativity and Cosmology Speed of Light Special Relativity

Open Source Physics 10 Strange Things About The Universe Space The universe can be a very strange place. While groundbreaking ideas such as quantum theory, relativity and even the Earth going around the Sun might be commonly accepted now, science still continues to show that the universe contains things you might find it difficult to believe, and even more difficult to get your head around. Theoretically, the lowest temperature that can be achieved is absolute zero, exactly ? One of the properties of a negative-energy vacuum is that light actually travels faster in it than it does in a normal vacuum, something that may one day allow people to travel faster than the speed of light in a kind of negative-energy vacuum bubble. One prediction of Einstein’s theory of general relativity is that when a large object moves, it drags the space-time around it, causing nearby objects to be pulled along as well. Relativity of Simultaneity Since this extra dimension is so small, only tiny objects, such as particles, can move along it. Antimatter Retrocausality

The Physics Classroom Gravitational microlensing Gravitational microlensing is an astronomical phenomenon due to the gravitational lens effect. It can be used to detect objects ranging from the mass of a planet to the mass of a star, regardless of the light they emit. Typically, astronomers can only detect bright objects that emit lots of light (stars) or large objects that block background light (clouds of gas and dust). When a distant star or quasar gets sufficiently aligned with a massive compact foreground object, the bending of light due to its gravitational field, as discussed by Einstein in 1915, leads to two distorted unresolved images resulting in an observable magnification. Since microlensing observations do not rely on radiation received from the lens object, this effect therefore allows astronomers to study massive objects no matter how faint. Microlensing by an isolated object was first detected in 1989. How it works[edit] Microlensing is based on the gravitational lens effect. Observing microlensing[edit] History[edit] .