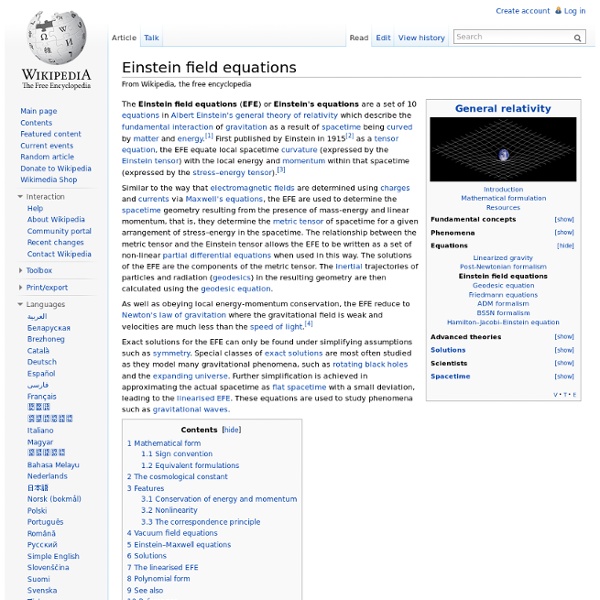 The Einstein field equations (EFE) or Einstein - Hilbert equations are a set of 10 equations in Albert Einstein's general theory of relativity which describe the fundamental interaction of gravitation as a result of spacetime being curved by matter and energy.[1] First published by Einstein in 1915[2] as a tensor equation, the EFE equate local spacetime curvature (expressed by the Einstein tensor) with the local energy and momentum within that spacetime (expressed by the stress–energy tensor).[3] As well as obeying local energy-momentum conservation, the EFE reduce to Newton's law of gravitation where the gravitational field is weak and velocities are much less than the speed of light.[4] Exact solutions for the EFE can only be found under simplifying assumptions such as symmetry. Special classes of exact solutions are most often studied as they model many gravitational phenomena, such as rotating black holes and the expanding universe. Mathematical form[edit] where the scalar curvature,

Friedmann equations and pressure . The equations for negative spatial curvature were given by Friedmann in 1924.[2] Assumptions[edit] The Friedmann equations start with the simplifying assumption that the universe is spatially homogeneous and isotropic, i.e. the Cosmological Principle; empirically, this is justified on scales larger than ~100 Mpc. where is a three-dimensional metric that must be one of (a) flat space, (b) a sphere of constant positive curvature or (c) a hyperbolic space with constant negative curvature. Einstein's equations now relate the evolution of this scale factor to the pressure and energy of the matter in the universe. The equations[edit] There are two independent Friedmann equations for modeling a homogeneous, isotropic universe. which is derived from the 00 component of Einstein's field equations. is the spatial curvature in any time-slice of the universe; it is equal to one-sixth of the spatial Ricci curvature scalar R since in the Friedmann model. which eliminates to give: Here . . Set