Quantum Diaries (Thoughts on work and life from particle physicists from around the world.) 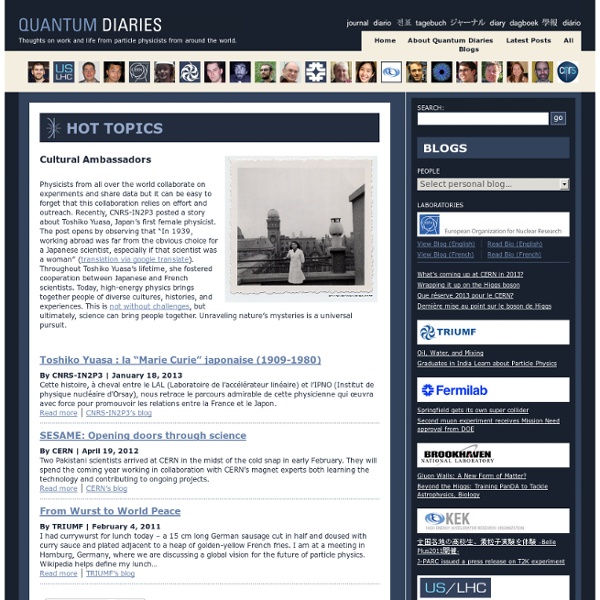 Accelerators The Large Hadron Collider is latest member of CERN's collection of extraordinary high-energy facilities and is the world's largest and highest-energy accelerator. It occupies a 27 kilometer circumference circular tunnel near Geneva which overlaps the Swiss-French border, the same tunnel that contains the LEP. Successful particle beams were produced in the LHC in 2008 and in 2010 the two beams reached 3.5 TeV, half the target maximum for the accelerator. Currently the work at the LHC is divided into six experiments denoted by the names ATLAS, CMS, ALICE, LHCb, TOTEM and LHCf. A major current objective for the LHC is the search for the Higgs boson. Though a small difference, it is a newly discovered difference between matter and antimatter and could contribute to the solution of the "antimatter problem" in cosmology. References: CERN Home CERN Document Server Wiki Large Hadron Collider

Институт теоретической физики им. Л.Д. Ландау Gravitational microlensing Gravitational microlensing is an astronomical phenomenon due to the gravitational lens effect. It can be used to detect objects ranging from the mass of a planet to the mass of a star, regardless of the light they emit. Typically, astronomers can only detect bright objects that emit lots of light (stars) or large objects that block background light (clouds of gas and dust). These objects make up only a tiny fraction of the mass of a galaxy. Microlensing allows the study of objects that emit little or no light. When a distant star or quasar gets sufficiently aligned with a massive compact foreground object, the bending of light due to its gravitational field, as discussed by Einstein in 1915, leads to two distorted unresolved images resulting in an observable magnification. Since microlensing observations do not rely on radiation received from the lens object, this effect therefore allows astronomers to study massive objects no matter how faint. How it works[edit] History[edit] . . . . .

Pacific Northwest National Laboratory lanl.arxiv.org e-Print archive mirror Physics World reveals its top 10 breakthroughs for 2011 The two physics stories that dominated the news in 2011 were questions rather than solid scientific results, namely "Do neutrinos travel faster than light?" and "Has the Higgs boson been found?". However, there have also been some fantastic bona fide research discoveries over the last 12 months, which made it difficult to decide on the Physics World 2011 Breakthrough of the Year. But after much debate among the Physics World editorial team, this year's honour goes to Aephraim Steinberg and colleagues from the University of Toronto in Canada for their experimental work on the fundamentals of quantum mechanics. Using an emerging technique called "weak measurement", the team is the first to track the average paths of single photons passing through a Young's double-slit experiment – something that Steinberg says physicists had been "brainwashed" into thinking is impossible. We have also awarded nine runners-up (see below). 1st place: Shifting the morals of quantum measurement

News in Brief: Particle caught flip-flopping | Physics A particle with an identity crisis could provide the next big discovery at the world's largest particle accelerator. The D meson has been caught in the act of flipping between matter and antimatter, researchers report online March 5 in Physical Review Letters. D mesons, like other mesons, are short-lived particles that emerge from the shrapnel of proton collisions at CERN’s Large Hadron Collider outside Geneva. The next step, says Syracuse University physicist Steve Blusk, one of about 600 members of the team that made the discovery, is to compare the number of D meson decays with the number of anti-D meson decays.

'Cosmic-Record Breaking' Black Holes Discovered: 10 Billion Times Bigger than Sun Berkeley scienctists have discovered two massive black holes beyond ou galaxy - they are probably the biggest ever known in the universe, and they are 10 billion times bigger than our sun. One lie at the center of the brightest galaxy, NGC 3842 within the 'Leo' galaxy cluster, about 320 million light-year away. The other resides in NGC 4889, the brightest galaxy, within the 'Coma Berenices' galaxy cluster 336 million light-years away from earth. The report of the astronomers led by Chung-Pei Ma, a professor of astronomy at University of Berkeley, was published in the journal Nature, titled “Two ten-billion-solar-mass black holes at the centres of giant elliptical galaxies.” Black hole is known as a region of spacetime with strongest gravity in universe from which nothing, even light, can escape. Typically there are two ways of formation of a black hole. It also allows their black holes, which exists in the center of its galaxy, to be merged to form a bigger black hole.