ITER - the way to new energy 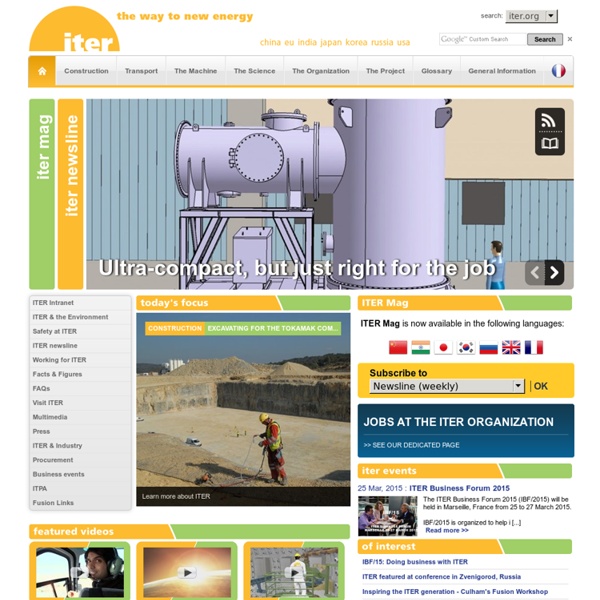 With this new magazine we aim to bring you inside ITER—sharing the enthusiasm of those working around the globe toward its realization with the widest possible audience. ITER is a vast subject that will take time to explore. Every few months we hope you’ll look forward to receiving news from the frontiers of ITER science and technology, the enterprising world of high-precision industry, and from the hilltop in Provence where it’s all coming together. This magazine is for you. We’d be happy to receive your suggestions and remarks for its improvement at the email address listed below. ITER Mag team editormag@iter.org

Better Nuclear Power Through Ping Pong The lab is deep-space quiet. A long, narrow hallway hung with fluorescent lights extends to my left. Four or five doors interrupt the flow of drywall. A few of those doors are open, the occupants of the rooms within now out in the hall and staring, ears plugged in anticipation. China’s Solar Valley: biggest solar energy production base in world China is in the process of building the biggest solar energy production base in the world. Called "Solar Valley," it's the nation's answer to America's Silicon Valley. China is in the process of building what it calls "the biggest solar energy production base in the world." 'We Don't Planet' Episode 3: What's Up with Gravitational Lensing? The fundamental description of gravity under general relativity — that the presence of matter and energy deforms the fabric of space-time, and this deformation influences the motion of other objects — leads to a rather unexpected result: a massive object can act like a lens, magnifying and warping the images of background objects. This prediction was the first major test of general relativity, with Sir Arthur Eddington leading an expedition to measure the small (but detectable) deflection of starlight around our sun, and today this facet of our universe is used as a powerful cosmological probe. The challenge that gravitational lensing answers is the determination of mass at very large scales.

Could cold spot in the sky be a bruise from a collision with a parallel universe? Scientists have long tried to explain the origin of a mysterious, large and anomalously cold region of the sky. In 2015, they came close to figuring it out as a study showed it to be a “supervoid” in which the density of galaxies is much lower than it is in the rest of the universe. However, other studies haven’t managed to replicate the result. Now new research led by Durham University, submitted for publication in the Monthly Notices of the Royal Astronomical Society, suggests the supervoid theory doesn’t hold up. Intriguingly, that leaves open a pretty wild possibility – the cold spot might be the evidence of a collision with a parallel universe. But before you get too excited, let’s look at how likely that would actually be.

Schrödinger’s Cat: Explained Erwin Schrödinger was born in Vienna on August 12, 1887 and was awarded the Nobel Prize in Physics in 1933. He is best known for his work regarding quantum theory, particularly about his thought experiment involving a cat in order to explain the flawed interpretation of quantum superposition. The Copenhagen Interpretation of quantum mechanics essentially states that an object in a physical system can simultaneously exist in all possible configurations, but observing the system forces the system to collapse and forces the object into just one of those possible states. Schrödinger disagreed with this interpretation. So what does this have to do with cats? Schrödinger wanted people to imagine that a cat, poison, a geiger counter, radioactive material, and a hammer were inside of a sealed container.

Chinese Scientists Successfully Teleported a Particle to Space When it comes to weird quantum effects, none is weirder than quantum teleportation. Scientists can—and have—used the unique and complicated physics of quantum mechanics to instantaneously teleport small particles across great distances. Now, a Chinese team has broken the distance record by teleporting particles to a satellite in space. When we talk about teleportation, we should be clear about exactly what that means. Nobody's beaming people to space like in Star Trek. Instead, quantum teleportation is a complicated and delicate process involving sending information across space using entangled particles and reassembling it somewhere else.

Google's Nuclear Fusion Project Is Paying Off - Google and Tri Alpha Energy Improve Plasma Generator Tri Alpha Energy / Erik Lucero Nuclear fusion, the process the sun has used for billions of years to fuse atoms of hydrogen into atoms of helium, could be the pot of gold at the end of the clean energy rainbow. If we could engineer a reaction to snowball but remain contained, nuclear fusion reactors could supply virtually unlimited clean energy here on Earth. Yet, the technology seems perpetually just around the corner. Google and nuclear fusion company Tri Alpha Energy, which operates fusion reactor projects in California, just took us one step closer to rounding that corner.

'Serious gap' in cosmic expansion rate hints at new physics Image copyright NASA A mathematical discrepancy in the expansion rate of the Universe is now "pretty serious", and could point the way to a major discovery in physics, says a Nobel laureate. The most recent results suggest the inconsistency is not going away. Prof Adam Riess told BBC News that an unknown phenomenon, such as a new particle, might explain the deviation. The difference is found when comparing precise measurements of the rate obtained in different ways.

(Spain) Abengoa Fires Up World’S Largest Solar Tower  The tower architecture that defines the PS20 plant is still fairly unique. This particular plant is 541 feet tall (about 54 stories if you picture it as a building), and uses 1,255 mirrors to laser focus sunlight to boil water, create steam and turn a turbine. Abengoa already has a similar, 10-megawatt tower in operation, and another 20-megawatt tower in the works. All of these structures are part of the envisioned Solucar complex slated to produce 300 megawatts by 2013. One megawatt of energy is enough to power about 800 households — and that’s a conservative estimate.

The single strange repeating fast radio burst is at it again Fast radio bursts, or FRBs, are one of the hottest topics in astronomy right now. These intense blasts of radio energy reach us from outside the galaxy, lasting only milliseconds before they disappear once more. Astronomers aren’t sure what causes them, and none of these bursts have ever repeated — except one, FRB 121102, which made headlines with the identification of its host galaxy, sitting nearly 3 billion light-years away.