Is the Universe a Holographic Reality? 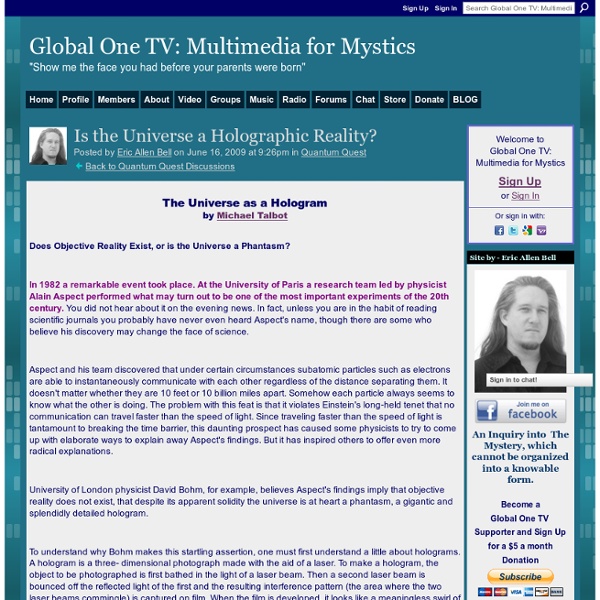 The Universe as a Hologram by Michael Talbot Does Objective Reality Exist, or is the Universe a Phantasm? In 1982 a remarkable event took place. At the University of Paris a research team led by physicist Alain Aspect performed what may turn out to be one of the most important experiments of the 20th century. You did not hear about it on the evening news. In fact, unless you are in the habit of reading scientific journals you probably have never even heard Aspect's name, though there are some who believe his discovery may change the face of science. Aspect and his team discovered that under certain circumstances subatomic particles such as electrons are able to instantaneously communicate with each other regardless of the distance separating them. University of London physicist David Bohm, for example, believes Aspect's findings imply that objective reality does not exist, that despite its apparent solidity the universe is at heart a phantasm, a gigantic and splendidly detailed hologram.

Suppressed Inventions and Other Discoveries - Archaeological Cover-Ups? by David Hatcher Childress Who controls the past, controls the future. Who controls the present, controls the past. George Orwell, 1984 Heavy Boots Editorial note: I received this as an email from a friend who got it from a friend who ... I do not know who the original author is, but I do believe this to be true. Who could possibly make it up? Heavy Boots About 6-7 years ago, I was in a philosophy class at the University of Wisconsin, Madison (good science/engineering school) and the teaching assistant was explaining Descartes. He was trying to show how things don't always happen the way we think they will and explained that, while a pen always falls when you drop it on Earth, it would just float away if you let go of it on the Moon.

Teleportation Teleportation is the name given by science fiction writers to the feat of making an object or person disintegrate in one place while a perfect replica appears somewhere else. How this is accomplished is usually not explained in detail, but the general idea seems to be that the original object is scanned in such a way as to extract all the information from it, then this information is transmitted to the receiving location and used to construct the replica, not necessarily from the actual material of the original, but perhaps from atoms of the same kinds, arranged in exactly the same pattern as the original. A teleportation machine would be like a fax machine, except that it would work on 3-dimensional objects as well as documents, it would produce an exact copy rather than an approximate facsimile, and it would destroy the original in the process of scanning it. In 1993 an international group of six scientists, including IBM Fellow Charles H. C.H.

Have Scientists Finally Discovered Evidence for Psychic Phenomena?! In Lewis Carroll's , the White Queen tells Alice that in her land, " memory works both ways." Not only can the Queen remember things from the past, but she also remembers "things that happened the week after next." Alice attempts to argue with the Queen, stating "I'm sure mine only works one way...I can't remember things before they happen." The Queen replies, "It's a poor sort of memory that only works backwards." How much better would our lives be if we could live in the White Queen's kingdom, where ours memory would work backwards and forewords?

Cases of Time Slips A white Ford pickup pulled up to cattle pasture near Ponca City, Oklahoma, in early Fall 1971, and stopped at a gate. Karl, Mark, and Gordon worked for cattle feed distributor and were sent to this remote area to pick up a feeder. What they found there has kept them silent for 41 years. “We opened the gate, which was barbed wire with no lock, and entered,” Karl said. “We went on the property, which was covered with grass up to and over the hood of the truck.” They drove through the tall grass to the tank that sat close to a red barn and got out of the truck. Researchers warn against high emissions from oil palm expansion in Brazil Expanding millions of hectares of Brazilian land to produce palm oil for food or for renewable, clean-burning biodiesel could result in extremely high emissions of carbon dioxide (CO2) unless strict controls are put in place. This is according to a new study published today, 14 November, in IOP Publishing's journal Environmental Research Letters, by a group of researchers from the University of California, Davis. The researchers found that unless the oil palm plantations are strictly confined to previously deforested land and not allowed to spill over into conservation or indigenous areas, the total amount of CO2 emissions from biodiesel, made from palm oil produced in that region, may exceed the carbon intensity of petroleum diesel, which biodiesel intends to replace. Brazil has drastically increased its production of biodiesel over the last decade. In each of the scenarios, 22.5 million hectares of land were converted, creating 29 billion gallons of biodiesel each year.

2011 May 7 - Dawn of the Planets Discover the cosmos! Each day a different image or photograph of our fascinating universe is featured, along with a brief explanation written by a professional astronomer. 2011 May 7 Dawn of the Planets Image Credit & Copyright: Luis Argerich Explanation: This month, four of the five naked-eyeplanets gather along the eastern horizon near dawn. Neptune and Uranus May Have Oceans of Liquid Diamond Future humans won't have to wait to travel to Pandora for the chance to mine unobtanium, because Neptune and Uranus may have diamond icebergs floating atop liquid diamond seas closer to home. The surprise finding comes from the first detailed measurements of the melting point of diamond, Discovery News reports. Scientists zapped diamond with a laser at pressures 40 million times greater than the Earth's atmosphere at sea level, and then slowly reduced both temperature and pressure. They eventually found that diamond behaves like water during freezing and melting, and that chunks of diamond will float in the liquid diamond.

Reality: A Mere Illusion (Part 2) By Leonardo VintiniEpoch Times Staff Created: December 20, 2009 Last Updated: June 17, 2012 A view of the visible universe as seen in a Hubble Telescope composite photograph. Is our universe just a hologram? Coincidence is an Illusion - What is Synchronicity? All Coincidences Have Meaning Nothing Happens by Chance Have you ever experienced a coincidence so incredible that it left you stunned? If so, then you have just taken a step into the amazing world of Synchronicity. What happens in most people’s lives is beyond their control. RADIATION REACTION Inertial reaction forces (discussed in "The Origin of Inertia") are a commonplace of everyday life. When we push on stuff, it pushes back because of its inertial mass. Less common in everyday life are pronounced recoil forces -- a special type of inertial reaction force -- like those experienced when shooting a gun or stepping out of a small boat onto a dock. But we know that they're quite real. The generalization of those experiences is the realization that whenever some massive object ejects part of itself, since the ejected part carries away energy and momentum, the original object must experience a recoil force.

3D Space Scene HD Wallpapers DMCAPrivacy policy All submitted content remains copyrighted to its original copyright holder. Images are for personal, non commercial use. 6 Insane Coincidences You Won't Believe Actually Happened America's Freak Luck During the Battle of Midway The Battle of Midway may be remembered as one of the most spectacular naval battles in history and one of the huge turning points in the Pacific theater, but it started out as a pure clusterfuck for the Americans. Despite going into battle with most of Japan's game plan in their pocket thanks to American codebreakers/Bothan spies, the U.S.

Best of TED Conference Talks: Part 1 If you do not know what TED is, refer back to the original article. Otherwise, enjoy the awesomeness that these talks have to offer! Paul Moller – The Flying Car In the Near Future Just like in the Jetsons, flying cars will be a reality within the next 10 years.