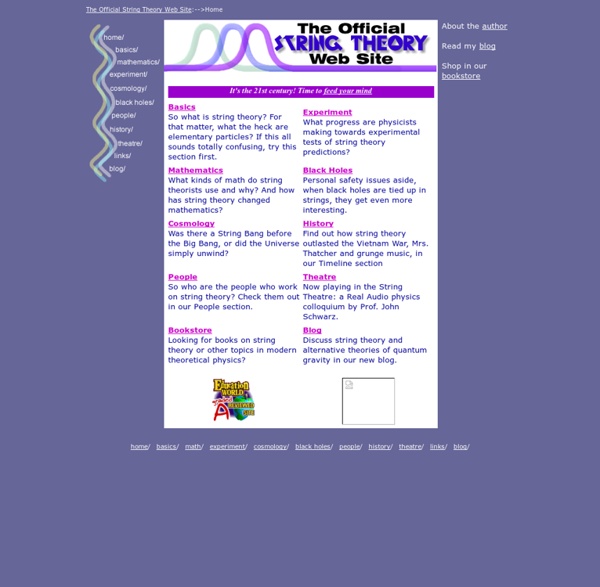 Special Relativity Special Relativity These pages are ok as far as they go, but they are missing the planned highlight, to show you what things actually look like when you travel at near the speed of light. I hope to have the opportunity to develop these pages further as time permits. Better Nuclear Power Through Ping Pong The lab is deep-space quiet. A long, narrow hallway hung with fluorescent lights extends to my left. Four or five doors interrupt the flow of drywall. Study suggests humans are only capable of having five people in their closest circle (Phys.org)—A trio of researchers affiliated with the University of Oxford in England and Aalto University School of Science in Finland has conducted a study of human behavior and has found evidence backing up a prior theory that suggests humans have different layers that make up their social circle with different numbers of people in them. In their paper uploaded to the preprint server, arXiv, they describe their study which involved analyzing cell phone records to count calls, what they found and that they believe it means for us a group. One of the researchers, Robin Dunbar, was part of a team that back in the 1990's studied the correlation between brain size in primates and the number of individuals in their social groups. They found that the bigger the brain, the more members of their groups. More recently, he and colleagues have conducted some experiments that suggest that humans have layers or groups of contacts, with the closet layers having fewer people, and the farthest, more.

Denisova Cave and the Mystery of the mtDNA Phylogenetic Tree « Rokus Blog Nobody expected a great surprise. Genetic testing of the little finger of an early hominin child found in the Siberian Denisova Cave, Kostenki, in the middle of archeological remains pertaining to Upper Paleolithic culture, would almost for sure confirm DNA similar to ours. There was a slim change that the pinky belonged to a Neanderthal from the neighborhood that got lost, but everything pointed at a an unequivocal member of the advanced group of hominins responsible for introducing symbolic art all over the world, the so-called anatomically modern humans (AMH). The collection of personal adornments and artifacts suggestive of symbolic behavior from the Early Upper Paleolithic deposits of Denisova Cave, Altai, is one of the earliest and the most representative of the Upper Paleolithic assemblages from Northern and Central Asia.