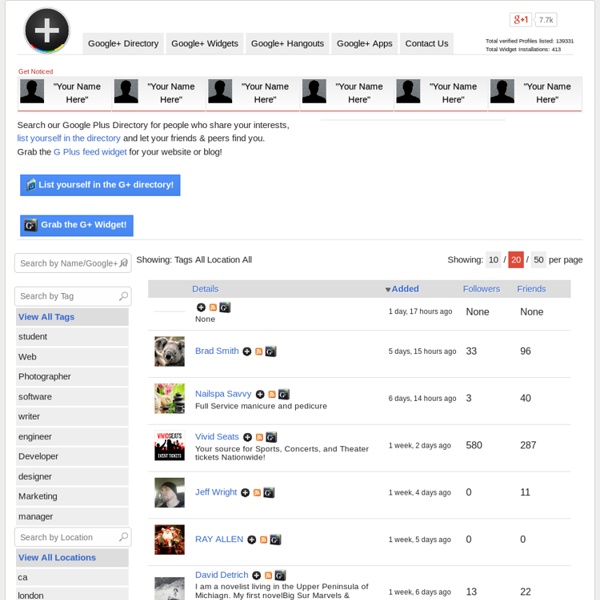 Google+ Gets A Big Refresh With New Navigation, A Redesigned Stream, A Dedicated Hangouts Page & More Google this morning is announcing a new look for its social network, Google+, which introduces a revamped navigation, with drag-and-drop elements and actions that appear when you hover over each item, as well as the introduction of new features aimed at making it easier to discover conversations to join, new profile pages, a dedicated page for Google+ Hangouts (Google+’s multi-person video chat offering), and more. It’s interesting that Google+ has now changed its design, after its first efforts received such praise. But, after using the service for some time, it became clear that Google+’s navigational elements became a little cluttered. That “share a YouTube video” feature, for example, which popped out a box on the right side of the screen, felt tacked on. The new interface drops the static icons at the top and moves all the navigation off to the side, allowing users to reorder the icons as they wish.

40 Google Plus Tips for Newbies Ok, so at this point, we are all newbies at Google Plus, right? At least if you got in recently via a Google Plus invite. At this point I’ve spent a decent amount of time with it and have concluded that Google has finally made a positive mark in social networking. It’s still early, but there is a lot of excitement around Google+ by those who have jumped on early, and for good reason. Google+ Refresh: Just Like Facebook, It's All About the Apps Barely a year into Google’s social initiative, Google+, the company has decided to re-imagine the user interface. But while Google says the focus is on a simpler, less cluttered approach, the refresh speaks volumes about where social as a whole is headed: It’s about the widgetization of social. Overall, the new Google+ look is cleaner and seems to make better use of the real estate.

6 Steps to Add Voice Comments to Google Docs Here is a step by step guide to show you how you can add " Voice Comments " within your Google Docs. This application is developed by 121 Writing. Here is how you can do it : 1- Head over to your Google Docs and click on " Create". scroll down to the bottom and click on "connect more apps " The Beginner's Guide to Google+ When Google+ entered the social space in 2011, it was met largely with skepticism. Joining a crowded field with platforms such as Facebook and Twitter, many users questioned the need for another social network. But roughly two years later, Google+ has established itself as the second-largest social media site in the world and boasts a monthly active user base of 235 million. And some of the products that Google built into the platform, such as Hangouts and Communities, along with its added integration in Google News that can benefit an active poster, have made Google+ an intriguing network for all users. If you're a newbie to Google+, these tips will help you get started. Creating a Google Account

How To Customize Google+ Not crazy about Google's design choices for Google+? Using scripts for Greasemonkey, Extensions for Chrome, Firefox Add-ons, and other browser plug-ins, you can make some pretty wild changes to the look and feel of the site. You can also take a more utilitarian route and take advantage of code that can translate posts from directly within Google+ or port all your Facebook photos to Google+ Photo (i.e., Picasa), where storage is virtually unlimited if you have a Google+ account (photos 2048 x 2048 pixels and smaller don't count toward your 1GB allowance). Check out these 16 scripts and tools that modify or enhance Google+ 1. Google Plus Header Hider (Mozilla) hides the black bar at the top of the screen. How To Search On Google Like Elite Hackers Google is best search engine in the world. Actually people think that Google's popularity is because of its simple and fast searching interface but friends, its more popular because it has rich operators and query support that will make your searching experience even better. Most of us doesn't know which operators are supported by Google and if they know some of them, they doesn't know how actually these operators work and enrich our searching practice. Today, i will tell you How we can search on Google like elite hackers or simply say computer experts do.

Google Tutor’s Google Search Manual A work-in-progress… Note: to link to this page, use “ It’s important to understand that links to individual pages within the manual could possibly change in future. Web Search 101 Google Tips, Tricks & Hacks Looking for the ultimate tips for Google searching? You've just found the only guide to Google you need. Let's get started: 1. The best way to begin searching harder with Google is by clicking the Advanced Search link. 2. How to Search Google Like a Pro: 11 Tricks You Have to Know Google is a powerful tool, but you’re missing out on a lot of that power if you just type words into it. Master Google and find the best results faster with these search tricks. Whether you’re an inexperienced user or a seasoned professional, you’ll probably find at least one search operator you weren’t aware of here. Many of Google’s search operators aren’t very well-known.

How to Get Unlimited Free Magazines from Google Play on Your Android Device « Tablets While the Google Play Store is filled with big name magazines like Time, Forbes, Sports Illustrated and Maxim, it also panders to smaller audiences, like with Coin Prices, Soap Opera Digest, Watch Journal and Quilter's World (which yes, is all about quilting). If you have a select few that you enjoy reading, prices aren't usually a problem; issues range from $1.99 to $4.99 for each one, or from $19.99 to $39.99 for yearly subscriptions. If you're someone that is a magazine connoisseur, prices can become a burden on the wallet. Well, good thing you can get any magazine for free.

Secrets to Get Better Results from Your Google Search When you have a question or query where’s the first place you turn to? Unless you’ve been living on some remote island for the last 15 years, odds are the first place you turn to to satisfy your curiosity is Google. With over 3.3 billion searches a day, Google has quickly become the go-to source for inquisative minds the world over, but have you ever stopped to think about how Google became the information giant it is today?