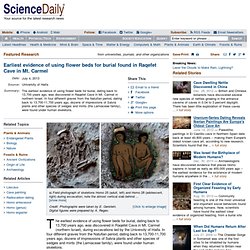 Carmel (northern Israel), during excavations led by the University of Haifa. In four different graves from the Natufian period, dating back to 13,700-11,700 years ago, dozens of impressions of Salvia plants and other species of sedges and mints (the Lamiaceae family), were found under human skeletons. Early human burials varied widely but most were simple. A new study from the University of Colorado Denver shows that the earliest human burial practices in Eurasia varied widely, with some graves lavish and ornate while the vast majority were fairly plain. 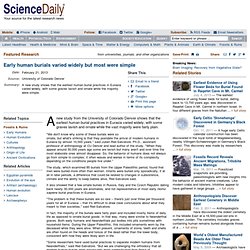 "We don't know why some of these burials were so ornate, but what's striking is that they postdate the arrival of modern humans in Eurasia by almost 10,000 years," said Julien Riel-Salvatore, Ph.D., assistant professor of anthropology at CU Denver and lead author of the study. "When they appear around 30,000 years ago some are lavish but many aren't and over time the most elaborate ones almost disappear. So, the behavior of humans does not always go from simple to complex; it often waxes and wanes in terms of its complexity depending on the conditions people live under.

" The study, which examined 85 burials from the Upper Paleolithic period, found that men were buried more often than women. "It's thought to be an expression of abstract thinking" Riel-Salvatore said. Hominids Went Out of Africa on Rafts. ANAHEIM, Calif. — Human ancestors that left Africa hundreds of thousands of years ago to see the rest of the world were no landlubbers. 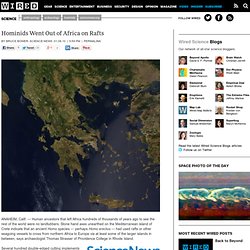 Stone hand axes unearthed on the Mediterranean island of Crete indicate that an ancient Homo species — perhaps Homo erectus — had used rafts or other seagoing vessels to cross from northern Africa to Europe via at least some of the larger islands in between, says archaeologist Thomas Strasser of Providence College in Rhode Island. Several hundred double-edged cutting implements discovered at nine sites in southwestern Crete date to at least 130,000 years ago and probably much earlier, Strasser reported January 7 at the annual meeting of the American Institute of Archaeology. Many of these finds closely resemble hand axes fashioned in Africa about 800,000 years ago by H. erectus, he says. It was around that time that H. erectus spread from Africa to parts of Asia and Europe. Strasser has conducted excavations on Crete for the past 20 years. 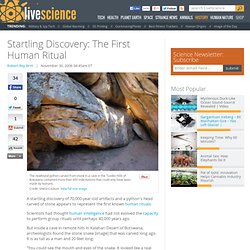 Scientists had thought human intelligence had not evolved the capacity to perform group rituals until perhaps 40,000 years ago. But inside a cave in remote hills in Kalahari Desert of Botswana, archeologists found the stone snake [image] that was carved long ago. It is as tall as a man and 20 feet long. Stone Age hunter-gatherers lived beside farmers, didn't interbreed - Technology & Science. A Stone Age tribe in Central Europe maintained its hunter-gatherer way of life for 2,000 years after the arrival of farming, surprising anthropologists. 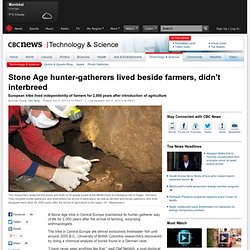 The tribe in Central Europe ate almost exclusively freshwater fish until around 3000 B.C., University of British Columbia researchers discovered by doing a chemical analysis of bones found in a German cave. “I have never seen anything like that,” said Olaf Nehlich, a post-doctoral researcher in UBC’s department of anthropology who co-authored a paper describing the results. It was published this week in Science Express. He and his colleagues were surprised because when agriculture was introduced to Europe around 5000 B.C., the development quickly led to the disappearance of the hunter-gathering lifestyle in the rest of the continent, Nehlich said. In fact, anthropologists had previously thought that there were no hunter gatherers left in Central Europe not long after after 5000 B.C. Central Texas site holds North America’s oldest proof of human settlement, researchers say. A Central Texas floodplain has yielded what its discoverers are calling the oldest credible evidence of human settlement in North America — going back as far as 15,500 years, 2,500 years before the people once accepted as the first Americans. 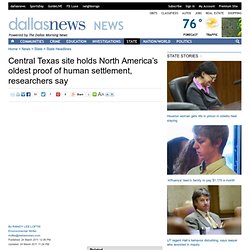 Near Buttermilk Creek, about 15 miles north of Georgetown, researchers from Texas A&M and Baylor universities found nearly 16,000 stone flakes, projectile points and tools in a soil layer that they dated to the end of the last ice age. Their article on the five-year excavation appears Friday in the journal Science. “This makes the … site the oldest credible archaeological site in Texas and North America,” said Michael Waters, the lead researcher and director of Texas A&M’s Center for the Study of the First Americans.

That assertion and other conclusions reached by the Texas researchers may be open to challenge, however. Other North American sites with pre-Clovis artifacts have been dated as much older. Clovis technology Soil testing. Are humans 250,000 years old? Göbekli Tepe.